The first Icon Series skins of Fortnite Season 7 have been revealed and if you’re a fan of soccer/football, then these will be right up your alley.

Harry Kane and Marco Reus will be the next two characters entering the Icon Series and they will be available via two separate bundles.

This means that if you want to snag both of them, you’ll be needing to spend a lot of V-Bucks, so make sure you save up!

Each bundle comes with a skin, Back Bling and emote, so there’s a lot of value to be had here if you’re a fan of either of the players.

When Do They Come Out?

The Icon Series kicks into full gear with two of soccer’s finest. @HKane and @woodyinho are coming to the Island.

Read to see when these two stars are arriving and get some details on the Fortnite UEFA EURO 2020 Cup where cash prizes are on the line.https://t.co/RkI3SN6yVt

If you are excited to get your hands on one or both of the bundles, then it would certainly help to know when they come out.

Currently, both bundles are set to hit the Item Shop on June 11 at 8 p.m. ET, which is when the daily Item Shop reset happens.

Both bundles are different and we don’t know the name of the Back Blings yet, but here’s what you’ll get for the Harry Kane bundle.

As for the Marco Reus bundle, it’s pretty much the same.

If we had to only pick one, we’d go with the Harry Kane bundle because the Back Bling looks very cool.

This isn’t the only thing soccer related that’s coming with the skins as there’s a whole tournament we have to look forward to. 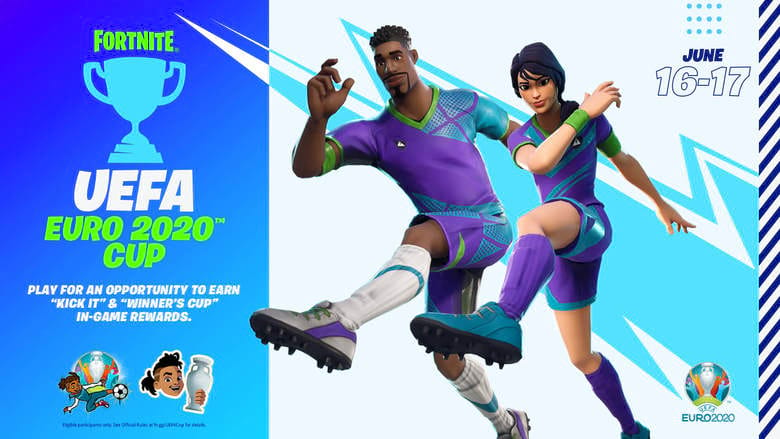 If you’re a competitive player who’s looking to make some money playing Fortnite, here’s another shot at doing it.

At the very least, players who come away with 10 points will be able to unlock a free emote while those who get 20 points to get a spray.

Only the best of the best will have a shot at coming away with money, but everybody should have a chance at getting the cosmetics.

There are two rounds to the tournament and you’ll need to place very high if you want to advance.

It is a Solo tournament, so it’ll be a chance to show off any improvements you’ve been making in the game, but be warned that other players will also be trying to do the same thing.

Players on any platform can join, so there will be a vast variety of skill levels found from match to match. If you’re interested in learning more about this tournament that kicks off on June 16, you can read the official rules here.

Maybe there will be a chance that either the UFO or Rail Gun will have been nerfed by that point. If not, you can take some powerful guns and vehicles into the tournament and see what you can do.