Police have identified Frazier Glenn Miller Jr., 73, a notorious bigot with ties to the Ku Klux Klan, as the suspect in the fatal shootings at Jewish centers in Overland Park, Kan. He was arrested shortly after the shooting, as he was taken into custody he allegedly shouted “Heil Hitler” several times. He’s accused of shooting dead a 14-year-old Eagle Scout and his grandfather as well shooting another unidentified woman. The attack has been classified as a hate crime.

1. He Could Face the Death Penalty

Police have charged Miller with one count of capital murder, which carries a possible death sentence. It’s up to prosecutors whether they want to pursue the death penalty, but they don’t have to make the decision until after a preliminary hearing.

The charge carries a sentence of life in prison without the possibility of parole if prosecutors don’t seek the death penalty.

2. He’s the Founder of a KKK Style Group

Miller is the founder and former grand dragon of the Carolina Knights, a KKK-affiliated group. The group soon evolved into the White Patriot Party. The group was described as following the doctrine of Christian Identity.

He’s been associated with hate groups for virtually his entire adult life. The Kansas City Star reports that in 2010, Miller tried to run as a write-in candidate for the Senate from Missouri. He bought advertising time on several Missouri stations where he spouted hate speech that denounced black people, Jewish people and the federal government. In one of the ads he said:

White men have become the biggest cowards ever to walk the earth. The world has never witnessed such yellow cowards. We’ve sat back and allowed the Jews to take over our government, our banks, and our media. We’ve allowed tens of millions of mud people to invade our country, steal our jobs and our women, and destroy our children’s futures. America is no longer ours. America belongs to the Jews who rule it and to the mud people who multiply in it.

Here’s how the race finished up, Miller received just seven votes in the election:

3. He Was Connected to the Greensboro Massacre in 1979

Miller was implicated in the Greensboro Massacre, in which KKK operatives opened fire on anti-Klan demonstrators in Greensboro, N.C., on November 3, 1979, killing five.

The demonstrators had been peacefully rallying and yelling “Death to the Klan” when Klan operatives showed up and eventually opened fire.

The video above is raw footage of the massacre. It is extremely graphic, and viewer discretion is advised.

After the massacre, it’s reported by the SPLC that Miller’s wife took the couple’s children and moved to Chicago.

In 1987, Frazier Glenn Miller was the subject of a nationwide manhunt: http://t.co/qq7rnIknIE pic.twitter.com/xoS3RjDXEe

Miller’s reign as the grand dragon of the Carolina Knights came to an end when the Southern Poverty Law Center sued him on the grounds that he was running an illegal paramilitary organization and using intimidation tactics against African-Americans.

According to the SPLC, Miller was sentenced to six months in prison for violating the court settlement in the case when he founded the White Patriot Party, another white supremacist group. He testified against other KKK operatives in a 1988 trial after taking a plea deal.

Miller was forced out of the army in 1979 after serving for 20 years, including two tours in Vietnam as a green beret.

He had risen to the rank of master sergeant before being forced out. In his book, A White Man Speaks Out, Miller writes about his beginnings in the white supremacy movement. He says he read a racist magazine called Thunderbolt that was given to him by his father.

Bear in mind here that I was an active member of the U.S. Army at this time, and in fact had been for the past 15 years. But, I saw no conflict or anything improper at being members of both. After all, Blacks, Jews, Indians, and Hispanics within the Army joined groups representing their people, so why couldn’t I do the same?

In the dedications section of his book, Miller makes reference to a wife, Marge, and five children, Kimberly, Frazier III, Jesse, Anna and Macy.

Just heard the horrible news over here in London about my hometown (KC) and the senseless shooting. My thoughts & prayers are with you… 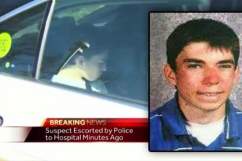