Brendon Glenn at the Venice Skate Park five days before he was fatally shot by a Los Angeles Police officer. (Photo by Mike Costanza)

An unarmed black man was killed Tuesday night by a Los Angeles Police officer in Venice and the department’s police chief said he is “very concerned” about the shooting.

“The officers attempted to detain the suspect, and an altercation occurred between the two officers and the suspect. During that physical altercation, an officer-involved shooting occurred,” Chief Charlie Beck said, according to KTLA.

The victim, Brendon “Dizzle” Glenn, 29, was homeless, according to police. The officer involved in the shooting, who is also black, has not yet been identified.

1. Police Were Called to a Report of a Man ‘Harassing Customers’ Outside a Bar

Police say they were called at about 11:20 p.m. for a report of a man “harassing customers and refusing to leave” outside a bar near 80 Windward Avenue in the department’s Pacific Area.

Two uniformed officers in a marked police car arrived and found Brendon Glenn on the sidewalk west of Windward Avenue, according to police. They briefly spoke to Glenn, the “possible suspect,” and he walked away toward the nearby boardwalk. The officers went back to their car and then saw the suspect “physically struggling” with a bouncer on the sidewalk west of their initial location.

Police said the officers tried to detain Glenn and an altercation occurred between him and the two officers. The officer involved shooting occurred during that “physical altercation,” police said.

A rescue ambulance was called and the officers began to perform CPR, police said. Los Angeles Fire Department paramedics arrived and Glenn was taken to the hospital, where he was later pronounced dead.

One of the officers suffered an injured knee, police said.

The case will be investigated by the Force Investigation Division and will ultimately be reviewed by the police chief, the office of inspector general and the board of police commissioners. A comprehensive review by the District Attorney’s Justice System Integrity Division will also conduct a review of the case.

2. The LAPD Chief Says There Are No ‘Extraordinary Circumstances’ to Justify the Shooting

Police Chief Charlie Beck said at a news conference that he is “very concerned” about the shooting death of Brendon Glenn.

Beck said he has reviewed video of the incident.

He said, the department, “will expend all resources to find out the truth of what happened.”

A town hall meeting was scheduled to be held Thursday night to talk about the shooting:

The scene in front Townhouse in Venice, a day after #LAPD's shooting of #BrendonGlenn pic.twitter.com/mIxWCFHA2l

It is completely irresponsible for anyone, much less the Chief of Police, to render a judgment on an incident that is in the early stages of the investigation. As the final trier of fact in the use-of-force investigation and disciplinary process, the premature decision by the chief essentially renders the investigation process void. Additionally, by making his opinion public without having all of the facts, he influences the investigation for all parties involved, including his command officers and the public. As in the criminal justice system, everyone is innocent until proven guilty. We encourage everyone to reserve judgment until the investigation has run its course, and the facts are collected and assessed.

Beck defended his comments in an interview with KTLA, saying, “I don’t think I rendered a judgment. I think I gave some factual statements about the state of the investigation, being very specific that this is not a conclusion that I am drawing and I will wait for the entire investigation to be presented to me before there is a conclusion.”

4. Video of the Shooting Shows the Officer Stepping Away & Firing Multiple Shots

According to the Los Angeles Times, the officers involved in the shooting were not wearing body cameras, but the shooting was caught on a nearby surveillance video system. Body cameras have not yet been distributed to all the city’s officers.

Beck based his comments about the justification for the shooting on a review of that video.

Sources who have seen the video, which has not been released to the public, told the LA Times it shows a brief struggle between the officers and Glenn, but doesn’t explain why one of the officers stepped away from Glenn and opened fire.

The newspaper reports the video shows the officer standing up and moving away from Glenn, and firing two shots at him from a few feet away. Sources told the LA Times that Glenn was taken to the ground by the officers and one source said it appeared they had control over him before the shots were fired. The video didn’t show any visible physical action by Glenn, according to the LA Times.

Audio was not recorded by the security camera.

5. Glenn Was Described By Friends as a ‘Peacemaker’

Brendon Glenn was fatally shot by a LAPD officer.

This is #BrendonGlenn aka #Dizzle dog that he was trying to feed last night b4 being killed by LAPD last night pic.twitter.com/pHUuL7hoJt

Henry Geller, friend of Brendon Glenn, called him a “peacemaker,” and told KTLA, “whatever reason that they had to shoot him, I don’t think it was justified because he wasn’t a confrontational human being by any means.”

Another friend, Allison Holden, acknowledged that Glenn had his issues, telling the LA Times, he “was a drinker. He has a drinking problem. But we all have problems.”

The manager of a local homeless center said Glenn had come there Tuesday evening and admitted he had been drinking since 11 a.m. Friends told the Times that he was vocal when drunk and one mentioned a “little mean streak,” but they said he never became aggressive.

He was a New York native and has been staying in Venice for a few months, those who knew him told the Times. They said he was kind man, constantly told people he loved them and adored his black Lab mix, Dozer.

The New York native started staying in Venice just a few months ago, people who knew him told the Times. They described him as a kind man who constantly told people he loved them and treated his black Lab mix, Dozer, like “his baby.” 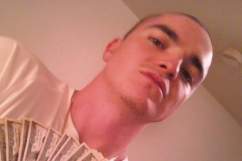