A suspect in an armored vehicle opened fire on police officers outside the Dallas Police Headquarters early Saturday morning. No one was injured, but the van, possibly loaded with explosives, took off, leading officers on a chase. The vehicle was later surrounded on a highway near Hitchens, Texas. Read more about the incident here.

The videos were captured by several people who were near the police headquarters, including the one above, and posted on Twitter.

Shoot out at the Dallas police station. SMH, this really is the wild wild west. pic.twitter.com/yZoOeu2RWb

Dallas police officer running for his life after realizing the threat was the armored van! pic.twitter.com/TRjePXFZJS

Get the latest updates on the incident at the link below: 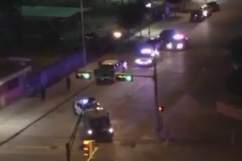