A phone interview with Dr. Ben Van Handel appeared in the seventh Planned Parenthood video released by the Center for Medical Progress. He is the executive director of Novogenix Laboratories, LLC, a company that partners with Planned Parenthood for fetal tissue procurement. The phone interview with Van Handel mentions the possibility of a fetal heart still beating after an abortion is performed. The video also talks about procuring brains from nearly formed fetuses. The seventh video has sparked outrage in pro-life advocates across the country. Van Handel was recently asked by Congress to explain in detail how Novogenix procures fetal tissue and how it assures that it complies with federal and state laws.

1. Van Handel Said That a Fetal Heart Is Sometimes Still Beating During ‘Procedures’

In the video, an activist posing as a buyer asks Van Handel: “Is there still circulation in the heart once you isolate it?” Van Handel responds: “So you know there are times when after the procedure is done that the heart is actually still beating.” The Daily Mail reported that it’s not certain what type of procedure Van Handel is talking about because the video is heavily edited.

2. He Is Executive Director of Novogenix, Which Is Partnered With Planned Parenthood

Van Handel is the executive director of Novogenix Laboratories, LLC. Novogenix is partnered with Planned Parenthood Los Angeles and, according to the CMP videos, is the procurement office which receives tissues from Dr. Deborah Nucatola. According to Van Handel’s LinkedIn profile, Novogenix focuses on offering support for scientific research, which includes cell and tissue procurement. The company’s services also include molecular fraction isolation, bioinformatics, and program development. The company’s tagline is “Scientists Supporting Scientists.” The company’s website does not currently address the Planned Parenthood videos. Its mission is listed as: “To consistently provide the highest quality materials on a timely basis and to expedite ground-breaking research using our stem cell research expertise.”

Van Handel founded Novogenix while he was a post-doctoral fellow at UCLA. He has a Ph.D. in molecular, cell and developmental biology from UCLA and a bachelor of science in biochemistry from Northern Michigan University. He has 26 publications on Research Gate.

4. The House Committee on Energy and Commerce Requested a Response from Van Handel About the Videos

A partial screenshot of a congressional letter sent to Novogenix and Dr. Ben Van Handel. (House Committee on Energy and Commerce)

On August 7, the House Committee on Energy and Commerce sent Van Handel a letter requesting an explanation for Novogenix’s role in the Planned Parenthood videos. It states that at least one video indicated that Novogenix procured fetal tissue from Planned Parenthood and recent videos raised questions about the buying and selling of human tissue. The letter goes on to state that according to the NIH Revitalization Act of 1993, those acts are unlawful. The letter requests that Van Handel send a briefing to the Committee by August 21, outlining Novogenix’s procedures for getting informed consent, its practices for collecting fetal tissue, its policies related to quality control, any fees it paid for fetal tissue in 2014, and how it assures that its collection is in compliance with federal and state laws.

5. The Seventh Video Talks About a Brain Being Taken from a Fetus

The seventh video, which is shown above and is graphic at times, includes a description by Holly O’Donnell, a whistleblower from StemExpress, describing harvesting a brain from a nearly fully formed fetus. She said the fetus was the most fully developed she had seen, according to Breitbart, and described in detail how he was prepared for dissection. She then described a colleague who wanted to show her “something cool.” The technician told her they were going to procure a brain, and then proceeded to cut through his face. O’Donnell said that was the moment she knew she had to leave StemExpress. 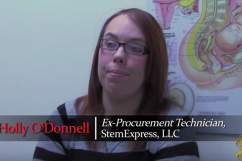 Read More
5 Fast Facts, Breaking News
Ben Van Handel, founder of Novogenix, talked about fetus hearts beating after abortions, according to a Planned Parenthood video. Find out more about him.