Republican presidential candidate Donald Trump, left, is greeted by his wife Melania Trump at a campaign rally at the Ramada Waterloo Hotel and Convention Center on February 1, 2016 in Waterloo, Iowa. (Getty)

Melania Trump, the wife of Donald Trump, hit the trail in Iowa Monday with her husband and other family members for last minute campaign stops before the Republican caucus. Donald Trump was leading the final polls heading into the caucus vote, ahead of Ted Cruz.

The 45-year-old Slovenian born model and jewelry designer addressed the crowd at a rally, saying, “Hello, Iowa, this is very, very special night and you’re voting for your next president, the man who will work for you, who will work with you.” She then asked the crowd, “And who is that man,” receiving a resounding “Donald Trump!” back. “I agree, he’s the man.” Watch video below:

“He will be unbelievable, the best dealmaker, the best master negotiator,” Melania Trump told the crowd.

Trump also had his daughter, Ivanka, and her husband, Jared Kusgber, on the campaign trail.

Melania Knauss Trump, Donald’s third wife, was recently featured on the cover of US Magazine for a rare interview. Melania married Donald in 2005 and they have one son together, Barron. They met in 1998 at a Fashion Week party in New York City.

“I give him ideas, and I give him my opinions,” she told US Magazine.. “Some stuff he listens to.” But she said she is only political at home, leaving the public politics to her husband. “That’s my husband’s job, I leave that to him.”

Republican presidential candidate Donald Trump speaks with his wife Melania Trump by his side during a campaign event at the U.S. Cellular Convention Center February 1, 2016 in Cedar Rapids, Iowa. (Getty)

She told the magazine that she is not just a “yes” woman.

“Do I agree with everything he says? No,” she admits. “I have my own opinions too, and I tell him that. Sometimes he takes it in and listens, and sometimes he doesn’t. But it is who he is, I don’t want to change him. He’s an adult, he knows what the consequences could be.”

Melania Trump also talked to US Magazine about her and her husband’s religion.

“We have a strong faith in the family. We are Christian. I was baptized in Slovenia. Barron was baptized in the church where we got married—actually, 11 years ago yesterday,” she told the magazine. “We go to church whenever we can and also for the holidays—Easter, Christmas.” 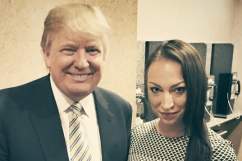