A video has emerged from San Francisco State University showing a black student criticizing a white student for having dreadlocks. The above clip shows Cory Goldstein trying to leave the area while he’s being chastised for wearing dreads by Bonita Tindle. He tells her, “You’re saying that I can’t have a hairstyle because of your culture? Why?” She responds, “Because it’s my culture. Do you know what locks mean?”

When he tells her that dreadlocks go back to ancient Egypt, Tindle tells him, “Are you Egyptian? Nah, man, you’re not.” Goldstein repeatedly asks her to stop holding his arms, to which she says, “You put your hands on me, you’re going to learn.” It ends with Tindle asking whoever is filming the encounter, “Why are you filming this?”

1. Goldstein Filed a Police Report Against Tindle & the School Is Investigating

San Francisco State University promotes the rights of the campus community to engage in free speech, but does not condone behavior that impedes the safety or well-being of others.

We are taking the matter seriously and will promptly and thoroughly investigate this incident through applicable university channels, including our campus student conduct procedures.

The video was posted to YouTube by a user under the name Nicholas Silvera. It’s the only video he’s posted.

2. Tindle Grew Up in Foster Care

Since the video emerged, Tindle has deleted her LinkedIn page. She described herself on that site as a “Cinematographer, Photographer, Editor, Journalist, Media Specialist.” The Golden Gate Xpress, an independent news site for the school, reports that Tindle is a photography student at SFSU and is a “media intern for Associated Students, Inc.”

You can watch a documentary she made above. It’s titled The Things We Carry. In the description on YouTube it says, “This thought provoking Docu-Narrative explores the struggles of growing up black and female in America.”

Another move she made, titled That Family Thing, explored “Tindle’s experiences from foster care to rediscovering her own family.” The movie features a moment when “Tindle describes reading Harry Potter and waiting for the letter from Hogwart’s to arrive.”

In 2013, Tindle wrote a review of Brie Larson’s movie Short Term 12, which deals with children in foster care. Tindle wrote, “The characters of the kids were realistic, they looked like any other kid. I can say that, in terms of their background stories, there were too many abuse stories. A childhood in a group home without an abusive background is equally traumatizing. There should have been a focus on one kid without abuse.”

3. Goldstein Is an Aspiring DJ & Is Using This Incident to Promote His Music

On his Soundcloud page, where Goldstein goes by the moniker Soulr, he describes his music:

Meanwhile, on Facebook, Goldstein says he’s a native of San Diego, is in a relationship and works at David’s Tea store as well as being a camp counselor at a Jewish Community Center. He posted a link to his Soundcloud page on the day the dreadlock video went viral with the message, “No cultures where [sic] hurt in the making of this mix.” One of his friends wrote in the comment thread, “Time to cash in on the viral videos. Make sure every interview you do ‘Don’t forget to like me on facebook and soundcloud! That’s dee jayy soulr!'”

In his About section, he writes:

Hi, I am Cory Goldstein If you didnt no that then I dont no how your looking at this 0.o but whatever :P. I am a really quiet person which most people have come to realize, so if you see me come talk to me >.> it would make my day :D. I love to hang out with friends and have a good time I am 18 years old.

MUsic is my life, my soul, my forever passion. Music calls to me hardstyle is my soul trance is my passion, hapopxcore is my love, drum and bass my life force but I am open to really anything .

I am a total nerd >.< Its hard to get to no me since I am really quiet, but make an atempt to get to no me :D I am random confusing and I zone out and daze off into space alot.

I like star gazing and to party all night long :) I am a good listener and will always be there for my friends through the best oif times and worst of times :) I Adore The night life wtith the hardcore redifining base rushing through me.

I live my life with spirit of the unerground I my love for the electronica. I love ways of expression because expression is the key to finding yourself and to vanguish any fears and or doutes that we as humans have.

I dont hate anyone, hate is a strong word that people abuse. I am my own person and live the way I want to live. I try and see the inner beuaty in everyone because we are all human beings at the end of the day. I dont get in the middle of fights I am very nuetral :)

Goldstein says that his girlfriend’s name is Krystina Flowtress. According to her Facebook page, she’s also a DJ.

Tindle has drawn criticism from conservative news sites such as Conservative Outfitters and Daily Wire. She has also come under fire on this Reddit thread.

A 4Chan thread has also been created to talk about the video and is titled “Politically Incorrect.”

5. There Are More Asian Students at SFSU Than Any Other Demographic

The campus at the San Francisco State University. (Wikipedia)

San Francisco State University’s website says that the demographics of the school break down as 35 percent Asian, 25 percent white and 5 percent black. There are around 30,000 students enrolled at the school.

A 2013 article on The Root website said that white people could have dreadlocks, “but it’s not the same. Don’t expect to enjoy the style without the scrutiny.” 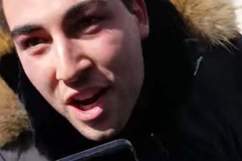 Loading more stories
wpDiscuz
176
0
Would love your thoughts, please comment.x
()
x
| Reply
Does Bonita Tindle have a point when she tells Cory Goldstein not to have dreadlocks because he's white?