Jamiel Shaw, Sr., one of Donald Trump’s first-night convention speakers, is the father of a promising high school teenager who was murdered by an illegal immigrant who wrongly thought he was a rival gang member because of his Spider-Man backpack.

Shaw is featured on night one of the convention, dubbed “Benghazi focus,” The Times says. The Times reports that the lineup includes, “Mr. Shaw, whose son was killed by an undocumented immigrant.”

Jamiel was a “happy teenager” when he was murdered, says Support Jamiel’s Law, a website devoted to passing legislation to deter crimes by illegal immigrants, including sanctuary city bans.

“Jas is loved by so many!! He had a smile that could light up your heart,” says the website’s “About Jamiel” section. “He was only 17 years young when his life was suddenly taken.”

Who is Jamiel Shaw and what happened to his son, Jamiel Shaw, Jr., sometimes called “Jas”?

1. Jamiel Shaw, Jr. Was Shot in the Head After Being Mistaken For a Bloods Gang Member Because of His Red Spider-Man Bookbag

According to the Los Angeles Times, Jamiel Shaw, Jr. (known as Jas) was shot in the head and back in 2008 in California when two men jumped out of a car as he was walking home. “He was asked what gang he belonged to. When he failed to respond quickly enough, they shot him, police said,” according to The Times. Jamiel was shot 40 steps from his home, says the OC Register.

At trial, prosecutors said the killer shot Shaw because he mistakenly thought he was a Bloods gang member but also because “he was a black man wearing a red backpack.” Jamiel was “not a gang member,” said The New York Daily News.

Jamiel Shaw, Sr. heard the gunfire and ran outside, staying with his son until help arrived, said The Times. Prosecutors called it a “cold-blooded, calculated execution,” said NBC Los Angeles.

Jamiel Shaw Jr. Was on his cell phone with his girlfriend, Chrystale Miles, when he was shot. Members of the Shaw family wore red in court during the trial to symbolize “the blood spilled,” said The New York Daily News.

2. Jamiel Shaw, Jr. Was a Promising Football Player Who Had Just Received a Call From Stanford

The Los Angeles Times reported that Stanford University called Jamiel Shaw, Jr. about a week before he was murdered, “intrigued by the slight but speedy running back for Los Angeles High School.”

The Times said he was the most valuable player in the Southern League the year before. Rutgers University called too, the Times said, but Jamiel Jr. was already dead. Shaw (sometimes referred to as Jamiel Shaw II) was also an honors student, said NBC Los Angeles.

“Jas did NOT have a criminal record,” says the Support Jamiel’s Law website. “Jas was not in a gang database. Jas was NEVER detained by ANY Law Enforcement Officer or any School Police. Jas was innocent and he still is! He was an American citizen and he didn’t deserve to be murdered!!!!”

The website says Jas was on his way to both college and the NFL. Shaw Sr. told the court at Espinoza’s sentencing that his son was “groomed to succeed.”

3. Jamiel Shaw, Jr. Was Killed by an Illegal Immigrant Who Received the Death Sentence & Had Just Been Released on a Gun Charge

#jamielshaw #deathsentence #donaldtrump Pedro Espinoza is sentenced to death for the murder of Jamiel Shaw https://t.co/6vrcCr2Awf

The man who killed Jamiel Shaw Jr. was Pedro Espinoza, a member of the 18th Street gang who was in Shaw’s neighborhood visiting a friend when he came upon the teen, according to 89.3 KPCC.

Espinoza’s lawyer, Csaba Plafi, argued that Espinoza should be spared the death penalty because of his “tough life.” He said the then 19-year-old Mexican-born Espinoza was “brought to the United States at a young age,” joined gangs at age 10, and spent “most of his life in juvenile camps,” which the lawyer dubbed “gladiator schools,” said 89.3 KPCC. NBC Los Angeles says Espinoza was an “infant” when his mother brought him to America.

Plafi also criticized the victim, telling NBC Los Angeles: “Jamiel wasn’t so innocent himself. That night he was wearing a red backpack, a red belt, red shoes. It’s the duck theory. If it walks like a duck and it looks like a duck…it’s a duck!” During the penalty phase of the case, Plafi said Espinoza’s mother came to America to escape an abusive partner and ended up with another one here, according to The Los Angeles Times.

Court testimony revealed that Espinoza had bragged “I’m a killer” after murdering Shaw, The LA Times said. Fox News says that Espinoza was released the day before the murder on “prior gun charges.” NBC Los Angeles said the prior charge was for “brandishing a weapon.” The OC Register describes the offense as “assault with a deadly weapon.” 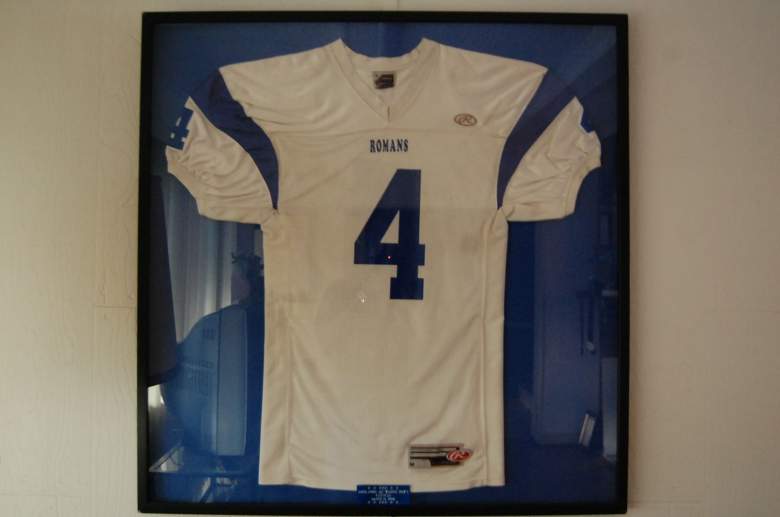 During the penalty phase of the trial, it was revealed that Espinoza had told a Probation Department employee during his time in a juvenile camp as a teenager that he was “down for death row,” The Daily Breeze said. According to Wave Wire Service, Espinoza was “the aggressor while in juvenile camps” in gang-related incidents that included “attacks on other inmates and possession of jailmade weapons after he was arrested in connection with Shaw’s killing.”

Deputy Probation Officer Carl Patton testified that “Espinoza jumped into a fight involving a rival gang member who was outnumbered and that he kicked the other teen in the face,” said the wire service. Patton testified that he asked Espinoza if he knew what crime it would take to get to death row, and Espinoza responded, “Killing.” In another incident behind bars, Espinoza used a chain to strike another inmate in the face, the news service report said.

NBC Los Angeles said the Shaws sued the Los Angeles County Sheriff’s department, “alleging that they had been negligent in releasing Espinoza from prison for an un-related abuse charge prior to the alleged murder, despite Espinoza’s lack of legal documentation.” However, the suit was dismissed.

The judge, Ronald H. Rose, said Espinoza “executed the victim as he lay on the ground defenseless” before sentencing him to death, according to The Daily News. At sentencing, Shaw Sr. told Espinoza, “You don’t have a right to execute someone and then come in and plead not to be executed,” The Daily News said. The death sentence came just days before voters in California were to vote on whether to abolish the death penalty.

Voters retained it, although it was then ruled unconstitutional, a decision overturned by federal courts. From 1978 through 2012, California had executed only 13 inmates on death row. Espinoza has not yet been put to death.

4. Jamiel Shaw’s Wife Was Serving in Iraq When Jas Was Murdered

According to 89.3 KPCC, Jamiel Jr.’s mother, Anita Shaw, was in Iraq serving her second tour of duty when her son was murdered. She was a U.S. Army sergeant, said the station. Anita said a “quiet prayer of thanks” when Espizona was convicted, The LA Times said.

At the sentencing, said The Daily News, Anita Shaw “invoked Scripture” and said she knew she was supposed to forgive the killer, but added, “I’m not that strong of a person.” She recalled how she “lost it” when her commander in Iraq told her that her son was murdered. The couple also has a son, Thomas.

5. Jamiel Shaw, Sr. Has Spoken Out Frequently on His Son’s Death & Is an Outspoken Anti Illegal Immigration Advocate 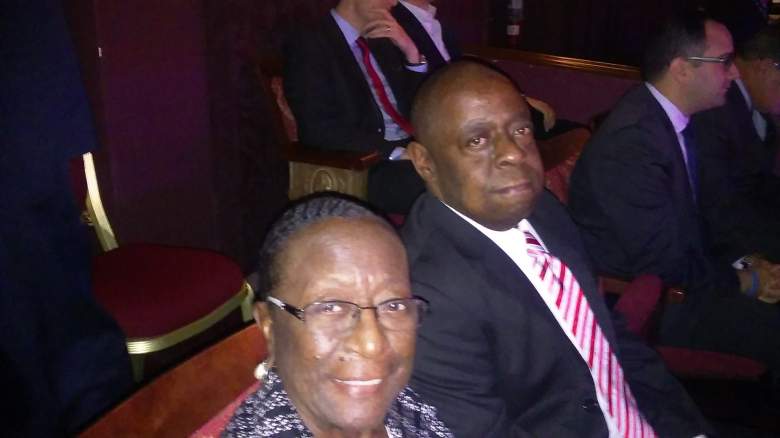 Jamiel Shaw has been a prolific speaker about his son’s death and illegal immigration in America. He was cut off by Black Lives Matter protesters at one Trump rally. To Fox News, Shaw has called illegal immigrants the “invisible people,” saying they aren’t supposed to be here. He lists himself as self-employed on his Facebook page. 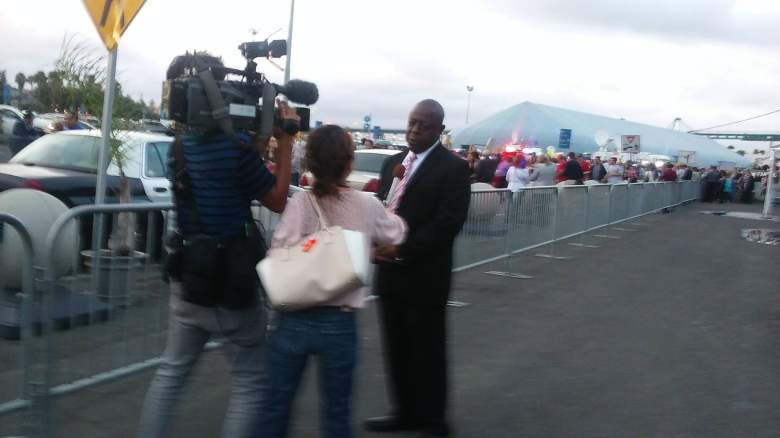 Shaw in one of his many media appearances in a photo on his Facebook page. (Facebook/Jamiel Shaw, Jr.)

Before Donald Trump was talking about illegal immigration, Jamiel Shaw, Sr. was doing so, says 89.3 KPCC: “Shaw’s parents took the issue to LA City Hall, asking for a law change that would allow LAPD officers to arrest undocumented immigrants who are gang members.”

The news site says the fact the family’s efforts “didn’t get far still disturbs Jamiel Shaw Sr., who says he doesn’t understand why talking about ‘illegal aliens’ committing crimes has to be taboo.” When Jamiel died, the public outcry was strong enough that both George W. Bush and Bill Cosby called the family.

Dear Iowans: Keep in mind, Mr. Trump is the only Presidential candidate speaking up for Americans killed by illegals pic.twitter.com/0JtONP9QT8

The Shaw family runs a Twitter page that is filled with political commentaries against illegal immigration, President Barack Obama, and Hillary Clinton and in support of Trump’s candidacy. Examples:

Since 2008, mainstream media have Refused to ask @POTUS about Jamiel Shaw & the illegal who murdered his Son! Why? @cnn @MSNBC #SayHisName

If it wasn't for @realDonaldTrump both parties had plans to usher in amnesty & give Americans the finger! #VoteTrump pic.twitter.com/Ds8t0qIojp

You can watch some of Jamiel Shaw, Sr.’s public comments here: