Madonna sparked a furor January 21 when, speaking at the Women’s March on Washington, the singer revealed thoughts of “blowing up the White House.” Former Speaker of the House Newt Gingrich, a longtime ally of Donald Trump, called for her arrest January 23, calling her remarks part of “an emerging left-wing fascism:”

Later, conservative blog Gatewaypundit quoted unsourced Secret Service spokesman stating that the agency would be opening an investigation into the singer’s comments. While a separate agent commenting on similar statements stated that an investigation into such comments “always” happens, case law and the opinions of several First Amendment attorneys suggest that the comment is protected free speech.

Watts v. United States in 1969 established the threshold for threats, particularly those against the President, to lie beyond the scope of First Amendment protection. Watts, an 18-year-old attending a Vietnam War protest, was told he should “get an education” before speaking up, and responded:

They always holler at us to get an education. And now I have already received my draft classification as 1-A and I have got to report for my physical this Monday coming. I am not going. If they ever make me carry a rifle the first man I want to get in my sights is L. B. J.

He was found to have violated a law against threatening the President. After a lengthy round of appeals, The Supreme Court held that the “willfulness” requirement of the law can only be met by proving the intention of the speaker to carry out his or her threat. Madonna immediately disavowed the idea following the phrase at issue, claiming it “won’t change anything,”  casting doubt on any sincere attempt to take her words as a true threat.

Lawyer Ken White, who writes on First Amendment and criminal defense issues, stated briefly on Twitter via @Popehat that the answer to the controversy was obvious:

Madonna, for her part, stated she was “taken out of context,” and that she intended to present “two ways of looking at things,” sharing both love and anger. 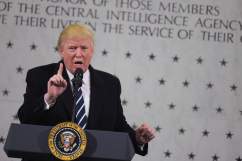