#Vice Laughing at Jeff Sessions Could Land This Woman in Prison: Desiree Fairooz cackled during the attorney… https://t.co/Vz2aqAhWUc pic.twitter.com/F6tpFrRH8A

The Department of Justice is prosecuting a 61-year-old woman, Desiree Fairooz, for laughing during Attorney General Jeff Sessions’ confirmation hearing. Here’s five facts you need to know about Fairooz and the case against her:

1. She Laughed at a Claim That Sessions “Treat[s] All Americans Equally”

Want to see exactly what the difference is between Obama's administration and Trump's?

According to the Huffington Post, which first broke this story, Fairooz was arrested by U.S. Capitol Police officer Katherine Coronado after Alabama Republican Senator Richard Shelby said that Jeff Sessions’ record of “treating all Americans equally under the law is clear and well-documented.”

Ironically, in 1986, Shelby ran a campaign ad saying that Sessions, who was a U.S. attorney at the time, had referred to the Ku Klux Klan as “good ole boys.”

Sessions’ 1980s nomination to the federal judiciary was shot down due to multiple allegations of racism, including one from a colleague who testified that Sessions once joked that he’d thought the KKK was okay until he learned some Klansmen smoked marijuana. At the time, there were also allegations that Sessions had once referred to a black staff member as “boy,” called the NAACP “un-American,” and used criminal prosecutions thwart voting rights for black Alabamans.

Sessions, for his part, had responded to Shelby’s 1986 campaign ad by calling it “slanderous” and “absolutely false.”

2. She’s Facing up to Six Months in Jail

Another protester escorted out of Sessions hearing. Her original offense appeared to be simply laughing. pic.twitter.com/p6lWzBVFRW

Vice reports that at Fairooz’s trial, prosecutors argued that her “laugh amounted to willful ‘disorderly and disruptive conduct’ intended to ‘impede, disrupt, and disturb the orderly conduct’ of congressional proceedings.” In her defense, Fairooz said her laughter was merely a reflex, and not intended to disrupt the proceedings. Her defense also argued that Fairooz was in the back of the room and he laughter had no noticeable impact on the proceedings, based on video of the hearings.

However, Katherine Coronado, the Capitol Police officer who arrested Fairooz, said that she laughed “very loudly.”

If convicted, Fairooz faces up to six months in jail, and a fine of up to $500. Ryan Reilly at the Huffington Post says that Fairooz is also facing another misdemeanor charge for “allegedly parading, demonstrating or picketing within a Capitol, evidently for her actions after she was being escorted from the room.”

3. She Has a Long History of Political Protesting

Laughing at @SenShelby 's bold lie regarding @jeffsessions record of treating every American equally. I was not charged. @desireefairooz was pic.twitter.com/WyaDEPKecZ

Fairooz is a member of CODEPINK (sometimes called Code Pink), whose website describes itself as “a women-led grassroots organization working to end U.S. wars and militarism, support peace and human rights initiatives, and redirect our tax dollars into healthcare, education, green jobs and other life-affirming programs,” which was “[f]ounded in fall 2002 as a grassroots effort to prevent the US war on Iraq.”

As a member of CODEPINK, Fairooz has a long history of political protest. In 2007, for example, she put fake blood on her hands and approached then-Secretary of State Condoleezza Rice at the start of a congressional hearing, saying that Rice and the rest of the Bush administration had the blood of “millions of Iraqis” on their hands.

But Fairooz’s supporters cite such history as evidence that Fairooz did not intend to be disruptive with her laughter during Sessions’ hearing. As comedian Elizabeth Croydon said to the Huffington Post, “If my hero Desiree Fairooz wanted to make a scene, she would’ve made a scene. Desiree just had an involuntary reaction to a bogus lie that was told bold-faced in front of the American people. Jefferson Sessions has a record of not treating every American equally.”

Croydon also tweeted a photo of herself “Laughing at @SenShelby ‘s bold lie regarding @jeffsessions record of treating every American equally. I was not charged. @desireefairooz was.”

@desireefairooz and co defendant #lennybinacchi smiling during a break while bravely facing charges for speaking against @jeffsessions ✌??? pic.twitter.com/PfI5C5xYuE

The Huffington Post notes that on January 10, the day of Sessions’ confirmation hearing, Katherine Coronado was only in her second week as a U.S. Capitol Police officer. She had never arrested anybody before, nor worked at any congressional hearing.

At Fairooz’s trial on Monday, assistant U.S. attorney Jason Covert (one of the people trying the case) asked Coronado is Fairooz’s laughter was “loud enough to draw your attention,” or if Coronado had noticed “seeing other people turning around.” Ryan Reilly said that “Coronado claimed she had seen other people turn around and later said Fairooz had been laughing ‘very loudly’.”

Covert later asked Coronado what she thought about Shelby’s praise of Sessions. “Is that funny? Is that a joke to you?” Coronado answered in the negative.

5. Two Other CODEPINK Members Are Being Charged Along With Her

"Jefferson Sessions is a racist" – Tighe Barry @codepink activist speaking against the confirmation of @jeffsessions pic.twitter.com/i1Rxo8TuZ8

Fairooz is not the only person facing charges over her presence at Sessions’ confirmation hearing. CODEPINK issued a statement noting that two other group members are also facing charges: Tighe Barry and Lenny Bianchi.

According to CODEPINK, “The two male defendants stood up before the hearing started, dressed as Klu [sic] Klux Klan members with white hoods and robes, and greeted the senator in a parody designed to highlight Sessions racist history. The third defendant, Desiree Fairooz, was arrested for laughing during the hearing when a senator spoke about Sessions exemplary qualifications for attorney general, and then unfolding a banner reading “Refugees welcome; Stop Sessions” as she was taken out of the room.

As part of that statement, Fairooz also said “I felt it was my responsibility as a citizen to dissent at the confirmation hearing of Senator Jeff Sessions, a man who professes anti-immigrant, anti-LGBT policies, who has voted against several civil rights measures and who jokes about the white supremacist terrorist group the Ku Klux Klan.” 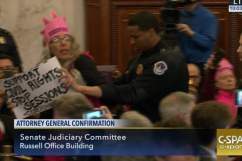