Republican congressional candidate Greg Gianforte looks on during a campaign meet and greet at Lions Park on May 23, 2017 in Great Falls, Montana. (Getty)

Republican candidate Greg Gianforte was ahead in the Montana special election on May 25, despite being accused of body slamming a reporter the night before.

That’s the real Gianforte above, and the Twitter version below:

The bizarre turn of events in the Montana race to replace Ryan Zinke had some on Twitter imagining Gianforte’s victory speech (or concession speech, as the election was still not over, as of 10:45 CST.)

Gianforte walking out for his victory speech pic.twitter.com/xY2xsxFehH

A lot of the joke posts had a WWF theme. Most of them, actually.

… is there any truth to the rumor that Vince McMahon … has offered Gianforte a gig … pic.twitter.com/w4K70JC7ny

Of course, none of it must be very funny to Ben Jacobs, the reporter who ended up in the hospital after he says Gianforte body slammed him and broke his glasses during an interview. That didn’t stop Twitter. Some joked that Gianforte should replace Sean Spicer at the press secretary’s podium. Others just joked.

#MTAL
GREG GIANFORTE​ HAS LOST CONTROL!!!
LIVE FEED OF HIM ASSAULTING THE @DNC!!! HE'S A COMPLETE MADMAN!!!
NOBODY CAN STOP HIM!!! pic.twitter.com/RqgSTKSXuK

Others found nothing funny about the situation:

It disgusts me to know people voted for Gianforte after he attacked that reporter.

Some thought the jokes were in poor taste.

You can see live voting results in the Gianforte-Rob Quist race here.

It was quite an astonishing pre election 24 hours. First, Ben Jacobs, a reporter for The Guardian, wrote on Twitter that Gianforte had body slammed him and broken his glasses.

Photos captured law enforcement and medics responding to the scene of the Gianforte campaign barbecue where the incident allegedly occurred. Then, Gianforte’s campaign released a statement blaming the reporter.

That was followed by a news conference held by a sheriff who had recently donated to Gianforte’s campaign; a Fox News crew then wrote an article saying they had witnessed the altercation and describing Gianforte, not Jacobs, as the aggressor. Election eve culminated with the sheriff’s announcing in a news conference that Gianforte had been cited for assault. The candidate kept a low-profile since that time as Montanans headed to the polls May 25.

People on Twitter had a field day with the body slamming allegation, although it’s obviously a very serious claim. On Twitter, they mocked Gianforte as the “Montana Mangler.”

The election was already regarded as a bellwether of sorts; it was being closely watched because Gianforte is a Republican running for an open seat in a state that went for Donald Trump by 20 points. But the election was closer than previously expected. The race was said to symbolize voter perceptions on the GOP healthcare plan (and, in fact, that was the topic of the question Jacobs asked before he was allegedly body slammed.)

The altercation was recorded on audio.

Alicia Acuna, a Fox News reporter, later wrote that she and the rest of the TV crew allegedly watched as Gianforte “grabbed Jacobs by the neck with both hands and slammed him into the ground behind him. Faith, Keith and I watched in disbelief as Gianforte then began punching the man.”

Trump recorded a robocall for Gianforte before the assault allegation in which the president called Gianforte “my friend” and praised him as “wonderful.”

Now, though, the election is also a bellwether of sorts about voter attitudes toward the news media in the Age of Trump.

They skewered the media.

They skewered the entire bizarre nature of the election. 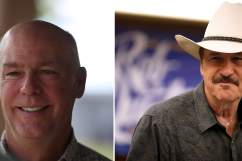