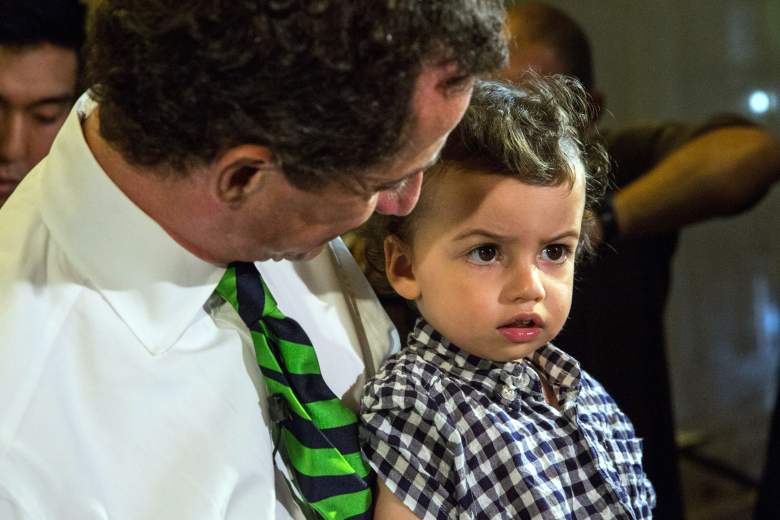 Anthony Weiner arrives at a polling station with his son, Jordan Weiner, on September 10, 2013 in New York City. (Getty)

Former Congressman Anthony Weiner has pleaded guilty to one count of transferring obscene material to a minor, meaning he will now be registering as a sex offender.

Weiner has a young son, Jordan, who sadly became involved in this most recent sexting scandal when he was featured in one of Anthony Weiner’s explicit photographs.

Here’s what you need to know Jordan Zain Weiner, the son of Anthony Weiner.

1. He Was Born in 2011, Six Months After Anthony Weiner Resigned in Disgrace 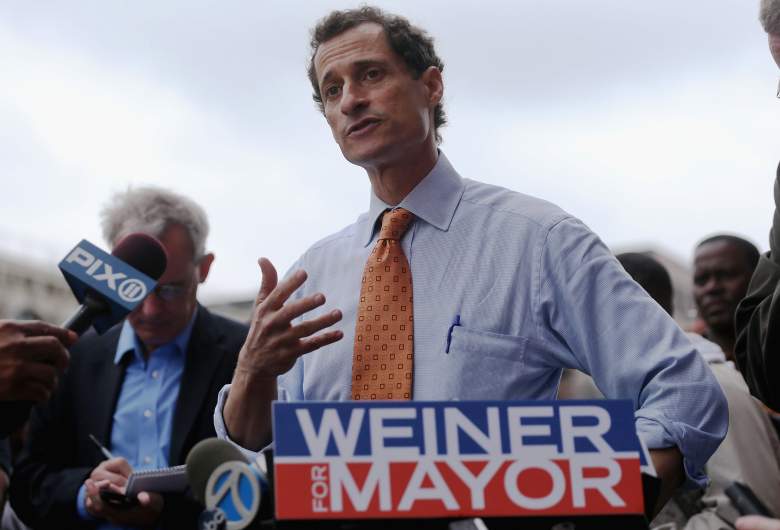 Anthony Weiner announces his campaign for New York City mayor in May 2013. (Getty)

This came six months after Anthony Weiner resigned in disgrace from Congress following his first sexting scandal. Jordan’s mother is Huma Abedin, who Weiner was married to at the time.

Anthony Wenier and Huma Abedin did not make it publicly known during the scandal that they were expecting a child, but this was reported in news outlets like ABC News and the New York Daily News.

At the time, some pundits had speculated that this was part of the reason that Abedin did not leave Weiner after the sexting scandal.

“It’s always easier to walk away when children aren’t an issue,” an anonymous source who worked with Abedin told The New York Daily News.

Anthony Weiner said in a New York Times interview that their son Jordan gave them a lot of perspective on the situation.

“But in the confines of our home and our relationship and our parenting this child and our love for each other — she said she wanted to get through it, she wanted not to conflate the giant international news story with the two people who were involved in it,” Weiner said. “And a lot of women couldn’t do that. And Jordan has given us a lot of perspective. We have to deal with this a lot. It’s not behind us. It kind of bubbles around and comes up in different ways.”

Abedin herself also said that she had to consider the fact that Weiner is the father of her child.

“Here was a man I respected, I loved, was the father of this child inside of me, and he was asking me for a second chance,” Abedin said. “And I’m not going to say that was an easy or fast decision that I made.”

2. After His Resignation, Weiner Became His Son’s Primary Caretaker 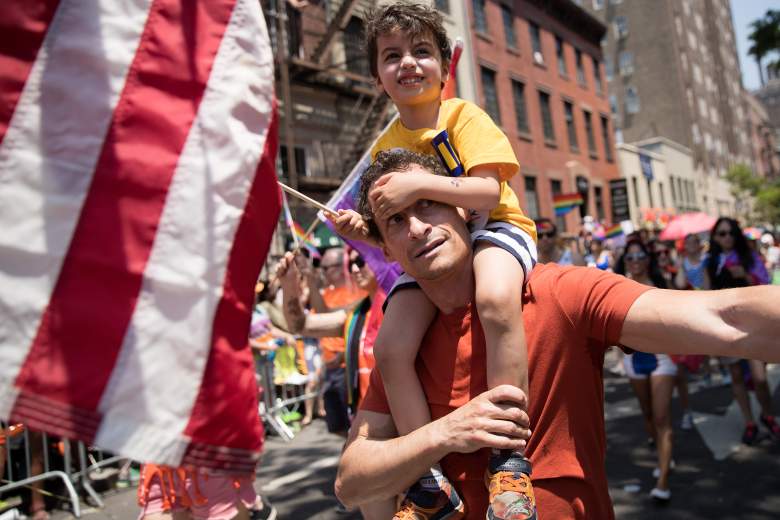 After Anthony Weiner resigned from Congress, he began doing some consulting work, but he spent a lot of his time taking care of his son.

After all, Huma Abedin was quite busy at the time, working as a personal aide to Hillary Clinton. Weiner raised his son in a $3.3 million apartment in Manhattan, according to The New York Daily News.

In a New York Times profile in 2013, Weiner said that he spent most of his time within a five-block radius of his apartment, running errands and taking his son Jordan to the park.

Weiner told People Magazine in 2012 that he often reads The New York Times to his son.

During this time, Anthony Weiner and Huma Abedin would often be photographed walking with their son in New York City. In 2013, Abedin an Weiner had a photo of Jordan published in People Magazine, and they said this was so that the value of a paparazzi’s photo of Jordan would decrease, according to The New York Times.

3. In 2015, Weiner Sent Explicit Photos That Featured His Son Asleep

EXCLUSIVE: Anthony Weiner sexted a busty brunette while his son was in bed with him https://t.co/f2C7tn1yoy pic.twitter.com/JNmerTREKD

In August 2016, The New York Post reported on yet another Anthony Weiner sexting story, but this time, it involved Weiner’s son.

The photo in question came from July 31st, 2015. During a text conversation with a woman, Weiner reportedly said, “Someone just climbed into my bed.” The woman responded, “Really?” Weiner then sent a photo of himself wearing only boxer briefs with his son Jordan lying on the bed in the background.

This photo was published on the front page of The New York Daily News with the headline “Pop Goes the Weiner: Daddy Sexts While Taking Care of Tot.” However, Jordan’s face was blurred out in the published picture.

The New York Post also reported separately that Weiner had referred to his son in this conversation as a “chick magnet.” The New York Daily News again published this on the front page with the subheadline “Exclusive: Weiner’s sick boast about son.”

Anthony Weiner boasted via sext about using his child as a “chick magnet” https://t.co/ftKT6WR83k pic.twitter.com/IiPpyrot1B

In September 2016, The Daily Mail reported that Weiner had maintained a months-long relationship with a 15 year old girl. The girl said that Weiner sent her photos of himself with his son and would often have explicit conversations with her while his son was around.

“[Weiner’s] son was in the bathtub at the time just downstairs,” the girl told The Daily Mail of one of their Skype conversations. “So he would yell at his son to check on him, and then he asked me to take my clothes off, and just started saying these really sexual things.”

The girl also said that she decided to come forward because Weiner involved his son.

“After seeing what he did with his son having him in the picture that was released, I think that he’s very disgusting and he needs help,” she said.

4. The New York City Administration for Children’s Services Opened an Investigation Into Weiner in 2016 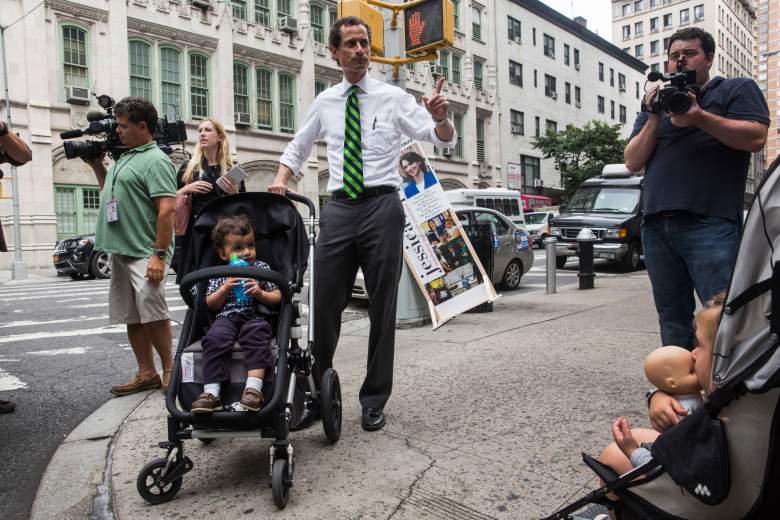 Not long after these revelations from The New York Post and the Daily Mail, the New York City Administration for Children’s Services opened up an investigation into Anthony Weiner’s treatment of his son, Jordan.

This was originally reported by The New York Post on August 31st, 2016.

Weiner told The New York Times that day that he had not been contacted by the Administration for Children’s Services, although he later said that they did leave a letter about the investigation at his mother’s house. Weiner said he was confused as to why they did not send the letter to him directly.

By law, the Administration for Children’s Services must investigate all reports it receives.

In August 2016, Huma Abedin and Anthony Weiner announced that they would be separating.

However, they never ending up finalizing a divorce, and in March 2017, The New York Post reported that Abedin and Weiner were trying to make their marriage work again. The Post reported that the separation over the summer was mainly because the Hillary Clinton campaign felt Abedin’s relationship with Weiner was hurting them.

Another part of that New York Daily News report was that Abedin and Weiner were sending their son to a private school. However, they ran into a problem when parents at the school didn’t want Anthony Weiner there.

“Parents were very concerned . . . They didn’t want [Anthony] to be on the playground,” a family friend told The New York Post.

Loading more stories
wpDiscuz
2
0
Would love your thoughts, please comment.x
()
x
| Reply
Anthony has plead guilty to plead guilty to one count of transferring obscene material to a minor. At home he has a 5-year-old son, Jordan.