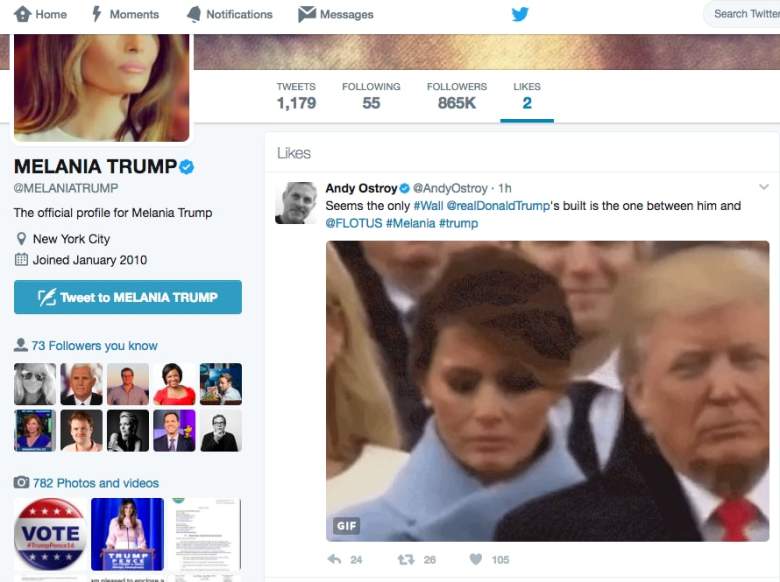 On Tuesday night, Andy Ostroy posted a GIF on Twitter of Melania Trump at the inauguration smiling for a brief moment while Donald Trump looks her way, only for the smile to immediately fade. Ostroy joked that the only wall President Trump has built is one between himself and his wife, Melania Trump.

Seems the only #Wall @realDonaldTrump's built is the one between him and @FLOTUS #Melania #trump pic.twitter.com/XiNd2jiLUF

This @MELANIATRUMP account, however, has not been utilized since the November election; over the past few months, the first lady has only tweeted using the @FLOTUS handle.

About an hour after the tweet was originally liked, Melania Trump’s account unliked it, and so it is no longer listed as a favorite on Trump’s account.

This was very likely an accident on the part of either Melania Trump herself or one of her aides, but it still made immediate waves on Twitter on Tuesday night. Some on the left even pointed to this as actual evidence that Melania Trump holds contempt for the president, something that has been theorized by outlets such as Jezebel but which there is no real evidence to support.

It’s not clear who might have been using the Melania Trump account tonight, but in March, the first lady hired a communication director: Stephanie Grisham, who had previously served as President Donald Trump’s deputy press secretary.

“Mrs. Trump’s life story is an inspiration to millions of mothers and female entrepreneurs, and to me personally,” Grisham said in a statement at the time of her hiring. “..I look forward to helping her communicate her unifying message of kindness and empowerment.”