Anthony Scaramucci has been tapped to serve as the new White House communications director.

According to media reports, President Donald Trump appointed Scaramucci after a meeting with his administration at the White House on July 21.

During the meeting, The Times reported of tense moments that ultimately led to the resignation of Press Secretary Sean Spicer, effective at the end of August.

Chief Strategist Steve Bannon, new Press Secretary Sarah Huckabee Sanders and Chief of Staff Reince Priebus also didn’t agree with the decision because they thought it “would perpetuate the notion of ‘amateur hour’ in the West Wing,” the Daily Beast wrote. They feared of his ability to do the job with his lack of experience in the communications field.

While he hasn’t held communications roles, Scaramucci has an extensive background in finance and recently been involved in politics.

Scaramucci, whose nickname is “The Mooch,” went to Harvard Law School and started his career at Goldman Sachs in 1989. He held various positions at the company in its investment banking, equities and private wealth management divisions and left in 1996 to form Oscar Capital Management. In 2005, he founded SkyBridge Capital, a global investment firm that he sold just days before Trump’s inauguration.

After Trump was elected, he served as a senior adviser on Trump’s transition team, but wasn’t offered a position in the administration prior to him taking office.

In 2008, Scaramucci was a Barack Obama supporter during his presidential campaign. Scaramucci was a fundraiser and said he voted for the Democrat. He later told Gawker that he supported Obama because he was his classmate at Harvard.

“The only time I crossed the aisle was to support Barack Obama in 2008,” Scaramucci said to Gawker. “I had known him in law school, and I felt comfortable with him the first time that he ran.

Two years later in 2010, Scaramucci was in the audience during a televised town hall meeting with Obama.

Obama took a question from Scaramucci, who was at SkyBridge at the time and the two toyed around before Obama slammed him for being on Wall Street.

Watch a video of the interaction below:

Scaramucci served as a member of the New York City Financial Services Advisory Committee from 2007 until 2012. When the 2012 presidential election rolled around, he served as the National Finance Co-Chair for Mitt Romney‘s campaign. 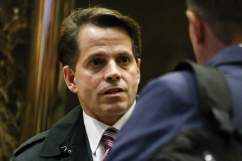 During the 2016 presidential election, Scaramucci gave his support to Wisconsin Governor Scott Walker and was the national finance co-chairman for the campaign. Once Walker dropped out of the race early on, he hopped aboard Florida Governor Jeb Bush’s campaign.

Once Bush got out of the race, he signed on to join the Trump campaign on its national finance committee.

“I am on board and will support and raise money for him,” Scaramucci said to The Washington Post. “I will do whatever I can to support our Republican nominee.”

In April, when it was reported Bush and former New York Yankees shortstop Derek Jeter were teaming up to buy the Miami Marlins, it was Scaramucci who was advising the group, the New York Post reported.

Prior to lending his support to the Trump campaign, Scaramucci was a contributor on TV news. Serving as a guest analyst on Fox Business Channel in August 2015, Scaramucci labeled Trump a “hack politician” and said he was engaging in “anti-American” rhetoric.

Watch a video of the segment above.

Scaramucci was questioned on the interview during his first press briefing after being hired July 21. He said that Trump never lets him forget about what he said, but is committed to the president.

“It was one of the biggest mistakes I made,” Scaramucci said. “I was an unexperienced person in politics, I was supporting another candidate. I should have never said that about him.

“So, Mr. President, if you’re listening, I personally apologize for the 50th time for saying that.”

Once he was hired as communications director, Scaramucci went to his Twitter account to delete tweets where he criticized Trump and also expressed his support for Hillary Clinton and Obama.

Updates from us: Scaramucci was a repeated, unrepentant Hillary fan on Twitter, calling her "incredibly competent."https://t.co/MstjiXmKvm pic.twitter.com/UR2utygjEL

In 2011, Scaramucci tweeted at Romney offering him “praise for the Governor’s decision to stay out of the Trump spectacle.” 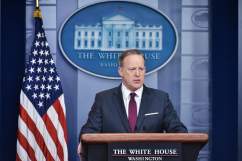 Why Did Sean Spicer Resign as White House Press Secretary?

In media interviews, Scaramucci has been adament that he “didn’t grow up with a silver spoon in his mouth,” The New York Times reported in 2010. He insisted that he went to a public school and then Tufts University before failing the bar exam after graduating from Harvard Law School.

In addition to that, he was transparent about his political beliefs in the interview.

“I’m pro-gay marriage,” Scaramucci said to The Times. “Pro-choice. Against the death penalty. I have no problem if the government raises my taxes.”

He reiterated his support of gay rights on Twitter.

One more point: I support the Gay Rights Movement and I am an active proponent of equality. https://t.co/IkJ6UXS0J8

There will be no "42" for the Gay Rights Movement and Gay Marriage. It will be more collective than that, but it's coming. . .

Back2Stonewall wrote back in February that Scaramucci is Trump’s “only pro-gay adviser’ in his administration.

“I’m also a gay rights activist,” Scaramucci said in an interview. “You can look it up. I’ve given to American Unity PAC, I’ve given to the Human Rights Campaign, I’m for marriage equality. And by the way, this’ll be the first American president in U.S. history that enters the White House with a pro-gay rights stance.”

In addition to his social views, Scaramucci offered his financial views during a Q&A with Gawker. He said he thinks there are “probably” too many hedge funds in the nation with “most of those hedge funds” not being stellar.

“I don’t have the numbers, but probably 85% of the assets are with the top 300 fund managers, and I would say that’s not too big,” he said in the interview. “I would say those people seem to have demonstrated very good performance over long periods of time… I think the industry will double over the next ten years. It goes from three to $6 trillion.” 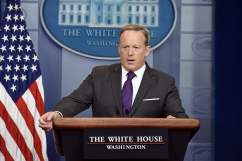 5. Scaramucci Once Said Scientists Get ‘a Lot of Things’ Wrong

Scaramucci was a frequent guest on many TV news networks as a member of Trump’s transition team.

During a December 2016 interview on CNN’s “New Day,” Scaramucci was questioned about climate change and said that members of the science community tend to get a lot of things wrong when speaking about the environment.

“I know that the current president believes that human beings are affecting the climate,” he said to CNN’s Chris Cuomo. “There are scientists that believe that that’s not happening.

In an interview with Gawker in 2015, Scaramucci spoke about his views on unions, saying that he supports them.

Loading more stories
wpDiscuz
0
0
Would love your thoughts, please comment.x
()
x
| Reply
Anthony Scaramucci has been hired as the communications director at the White House. He's a financer from New York who was one of the GOP's top donors.