Cosmo DiNardo has confessed to “participating in or committing” the murders of all four missing Bucks County men, and he told news reporters he was “sorry” he did it, his attorney told ABC6.

You can watch video below of DiNardo apologizing. Reporters shouted questions at DiNardo as police led him through a building near the courthouse on July 13. “Cosmo you admitted to killing four people? Why’d you do it? What do you have to say to these families, Cosmo?” one reporter asks.

According to The Associated Press, DiNardo allegedly confessed that he killed the men “separately after selling them marijuana and then burned their bodies at his family’s farm.” The AP added that there was an unnamed co-conspirator involved in three of the killings.

The fact that DiNardo’s lawyer also referred to participation opens up the obvious question of whether DiNardo is claiming someone else was involved, but that point remained unclear, as is a motive or how the men were killed.

BREAKING: Per his attorney Paul Lang, Cosmo DiNardo confessed to all four murders. He told authorities where bodies are located. @CBSPhilly

DiNardo is “ready to plead guilty to four counts of first-degree murder,” reported ABC6. “In exchange for that confession, Mr. DiNardo was promised by the district attorney that he will spare his life by not invoking the death penalty,” Lang said to the television station. “He was very forthright and gave all relevant details that he could.”

Here’s a screenshot from the video:

Cosmo DiNardo is led into a police van after confessing to police for killing four men in Bucks County, Pennsylvania.

The case of the four missing Bucks County, Pennsylvania men has transfixed the state and led to unfathomable grief for their distraught families and friends. The men vanished on two different days. Authorities were first led to DiNardo when another man accused him of trying to sell one of the victim’s cars. The missing men appear to have had only tangential connections to him. For example, one of the men, Jimi Patrick, had once gone to school years ago with DiNardo, a diagnosed schizophrenic, and was his Facebook friend.

A massive search effort was launched. Then, after searching his parents’ sprawling rural farm, the Bucks County DA announced in a rare midnight press conference on July 13 that cadaver dogs had found human remains on the DiNardo property in a 12 and a half foot grave. The district attorney said that the body of one of the missing men, Dean Finocchiaro, was identified, and that there were other as-yet unidentified remains in what he dubbed a “common grave.”

Screengrab via NBC PhiladelphiaJimi Tar Patrick is second from right.

DiNardo was already in custody accused in the theft of Tom Meo’s car, and he was previously accused of a firearms offense, but he had posted bail for the latter case.

The missing men were described as promising young men by family members and friends. Patrick, for example, was a student at Loyola University in Maryland on a full scholarship, and Sturgis worked for his family’s construction business.

You can learn more about DiNardo’s alleged confession here: 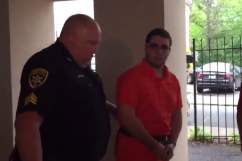