President Donald Trump was fired up Tuesday night during a “Make America Great Again” rally in Phoenix, Arizona, the site of his first ever campaign event. A night after a somber address to the nation about his strategy for the Afghanistan war, Trump ranted about the reaction to his Charlottesville statements, the media, Sheriff Joe Arpaio, immigration and the Senate filibuster rule, among several topics.

You can watch a full replay of the more than 75-minute speech above.

Trump was joined in Phoenix by Vice President Mike Pence, Housing and Urban Development Secretary Ben Carson, Alveda King, Rev. Franklin Graham and Arizona State Treasurer Jeff DeWit. Behind him for most of the rally was a familiar face from many of his campaign stops, a man named Michael Symonette, who was holding a “BlacksforTrump2020.com” sign.

Trump started the rally by speaking about the size of the crowd in the room and claimed the Secret Service told him there weren’t too many people protesting outside. Thousands were expected to gather against Trump outside the arena Tuesday night.

“I’m thrilled to be back in Phoenix, in the great state of Arizona, where so many thousands of hard-working American patriots, you know I’d love if the cameras could show the crowd, because it is rather incredible,” Trump said. “It is incredible. This was the scene of my first rally speech. Right? The crowds were so big, almost as big as tonight, that the people said aright at the beginning, you know, something special is happening here. … And we went to center stage and we never left. All of us. We did it together.”

Trump said he came to Phoenix to “send a message that we are fully and totally committed to fighting for our agenda and we will not stop until the job is done.”

The president said he came to be with friends to “reaffirm our shared customs, traditions and values. … We love our country, we celebrate our troops, we embrace our freedom, we respect our flag, we are proud of our history, we cherish our Constitution, including, by the way, the 2nd Amendment.” 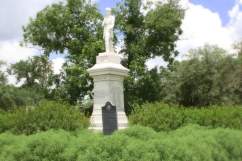