Getty Miami is one of American Airlines' 10 hubs.

American Airlines announced Wednesday that it is expecting to cancel flights to and from Miami because of Hurricane Irma. Flights to and from Fort Lauderdale, Fort Myers, Sarasota and West Palm Beach were also cancelled during the weekend, as the storm gets closer to Florida.

.@AmericanAir says it has cancelled 2,000+ flights because of Irma, will halt flights from Orlando Saturday pic.twitter.com/jeuQIMSAhp

Flight Aware, which tracks flight cancellations and delays live, shows 19 cancellations for flights to MIA and 78 delays. Thirteen flights leaving MIA were cancelled and 58 were delayed.

ABC News reports that 640 flights could be cancelled if all Saturday and Sunday flights are cancelled. Miami International Airport is American Airlines’ fourth-biggest hub. Charlotte, which could also be impacted by Irma when it moves up the east coast, is also an AA hub.

An American Airlines spokesperson told Business Insider that the few tickets still available for flights leaving Florida will be offered at $99. “While there are limited seats remaining before the storm hits, we will cap our pre-tax fares at $99 for Main Cabin seats on direct, single leg flights out of Florida for tickets sold through Sunday Sept. 10 for travel until Sept. 13,” the airline said. The airline also told the site that it is planning on cancelling flights to and from Miami, Fort Lauderdale, Fort Myers, Sarasota, and West Palm Beach on Saturday and Sunday.

Here is the latest announcement from American Airlines:

The latest forecast projects Hurricane Irma to make landfall in South Florida this weekend. Operations in Miami, Fort Lauderdale, Fort Myers, Sarasota and West Palm Beach will be canceled throughout the weekend. Flights originating from Europe and South America that were scheduled to arrive Friday have also been canceled. Please review our latest travel alert for more information.

MIA is also warning passengers that they are experiencing a high volume of passengers, so you need to get there at least two hours early.

We're experiencing a high volume of passengers. Please arrive at least 2 hours before your flight for check-in and security.

The latest travel alert from the airline notes that change fees for flights to and from the above five airports will be waived if you bought your ticket by September 5 and were scheduled to fly between September 5 and September 12. You can also re-book your flight to a destination city or origin within 300 miles of your original airport. If you had a flight to or from Daytona Beach, Melbourne, Key West, Orlando and Tampa, you can also change your flight without facing a fee.

Irma is now a Category 5 hurricane, as of the 2:00 p.m. AST public advisory from the National Hurricane Center. It has maximum sustained winds at 185 mph and is less than 100 miles from San Juan, Puerto Rico. The latest forecast has it reaching Miami and South Florida by Sunday morning. 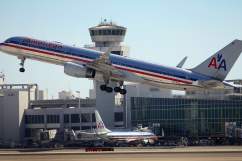 Loading more stories
wpDiscuz
1
0
Would love your thoughts, please comment.x
()
x
| Reply
American Airlines cancelled flights from Miami, one of its main hubs, and other airports in South Florida in anticipation for Hurricane Irma.