Getty Kim Jong Un in an undated photo from the North Korean government.

Here’s a look at the meaning of the word and the context behind Kim’s use of it.

GettyPresident Donald Trump at the UN.

“I will make the man holding the prerogative of the supreme command in the U.S. pay dearly for his speech,” Kim said in the speech. He also called Trump a “mentally deranged U.S. dotard,” whose UN speech was filled with “unprecedented rude nonsense.”

“I am now thinking hard about what response he could have expected when he allowed such eccentric words to trip off his tongue. Whatever Trump might have expected, he will face results beyond his expectation,” Kim said, adding that he will “tame” Trump “with fire.”

“As a man representing the DPRK and on behalf of the dignity and honor of my state and people and on my own, I will make the man holding the prerogative of the supreme command in the U.S. pay dearly for his speech calling for totally destroying the DPRK,” Kim said. “This is not a rhetorical expression loved by Trump.”

Another possible response to Trump’s strongly-worded UN speech could be much more dangerous than the use of the word “dotard.” CNN reported on Friday that North Korea’s foreign minister, Ri Yong Ho, told reporters at the UN that Pyongyang could test a nuclear weapon over the Pacific Ocean.

“This could probably mean the strongest hydrogen bomb test over the Pacific Ocean. Regarding which measures to take, I don’t really know since it is what Kim Jong Un does,” Ri told reporters. 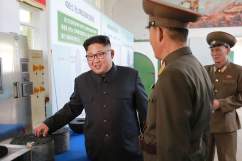 2. The Word Means: ‘A Person… Exhibiting a Decline in Mental Faculties’

It’s a real word though and searches for it on Merriam-Webster’s website skyrocketed. The word has been around since the 14th Century and means “a state or period of senile decay marked by decline of mental poise and alertness.”

The definition on Wiktionary is a little different. “An old person with impaired intellect; one in his or her dotage,” it reads. “A person, especially an old person, exhibiting a decline in mental faculties; a weak-minded or foolish old person,” Dictionary.com reads.

Merriam-Webster notes that the world comes from a Middle English word “doten,” which first meant “imbicile.” William Shakespeare used it in a scene in Much Ado About Nothing, where he wrote:

“I speak not like a dotard nor a fool, / As under privilege of age to brag / What I have done being young or what would do / Were I not old.”

You can also find the word in Geoffrey Chaucer’s The Canterbury Tales, published in 1387. Chaucer wrote:

Thou seist, that oxen, asses, hors, and houndes, / They been assayed at diverse stoundes; / Bacins, lavours, er that men hem bye, / Spones and stoles, and al swich housbondrye, / And so been pottes, clothes, and array; / But folk of wyves maken noon assay / Til they be wedded; olde dotard shrewe! / And than, seistow, we wol oure vices shewe. 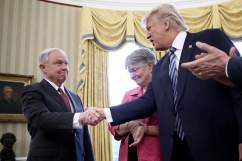 Beleaguered Meaning: What Was Trump Saying About Sessions in Tweet?

3. This Wasn’t The First Time Donald Trump’s Been Called a ‘Dotard’

Let the record show that @CharlesPPierce called Trump a dotard in May. #AmericaFirst pic.twitter.com/3XzGxs9sLo

This actually isn’t the first time Trump has been called a “dotard.” As Emmy-winning writer Robert Schooley pointed out on Twitter, Esquire writer Charles P. Pierce used the term in May.

Pierce used it in his op-ed “The President of Russia Is Smarter Than the President* of the United States.”

“The most innocent explanation for the president*’s actions is that he’s a blundering dotard who can’t stop himself from destroying democratic institutions and from tripping over federal statutes,” Pierce wrote. “Even if you don’t think he’s done anything criminal, he’s getting gamed from every point on the compass—by his own leaky staff, by James Comey, by the Russians.”

President Andrew Jackson, who Trump idolizes, was also called a “dotard.” Edward L. Widmer wrote in Martin Van Buren: The Presidents Series: The 8th President, 1837-1841 that future Lincoln Secretary of State William H. Seward called Van Buren “a crawling reptile, whose only claim was that he had inveigled the confidence of a credulous, blind, dotard old man,” referring to Jackson. (Van Buren was Jackson’s Vice President and won the presidency after Jackson served two terms.) 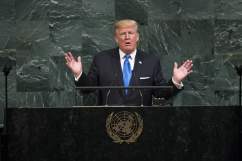 Kim delivered his speech in Korean, so he used the word “neukdari,” notes the Associated Press. Although the word has been used before, the state-run KCNA doesn’t usually translate the word as “dotard.” Instead, they usually use the word “old people.”

The AP notes that sometimes the word is completely omitted. KCNA last included the word in a February statement to describe the supporters of ousted South Korean President Park Geun-hye. They also used the word to describe Park herself, who they also once called a “prostitute.” Park’s predecessor, Lee Myung-bak, was also called a “traitor like a dotard.”

Neukdari is among the words that still has the same meaning in North and South Korea, which has seen their language diverge since the two nations were split. The Korean version of KCNA’s statement for Kim’s comments also included the word “michigwangi,” which means “crazy” or “mad,” next to “neukdari.”

It’s rare for the English KCNA translations to include the crude Korean insults. For example, in August, Gen. Kim Rak Gyom claimed Trump showed his “senility” with his “fire and fury” comment. 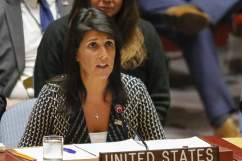 Kim’s speech was a direct response to Trump’s fiery rhetoric at the UN on Tuesday. In the speech, the president vowed to “destroy North Korea” if it ever attacked the U.S. He also once again referred to Kim as “Rocket Man,” as he did a few days earlier on Twitter.

“The United States has great strength and patience, but if it is forced to defend itself or its allies, we will have no choice but to totally destroy North Korea,” Trump said. “Rocket Man is on a suicide mission for himself and for his regime. The United States is ready, willing and able, but hopefully this will not be necessary.”

“Kim Jong Un of North Korea, who is obviously a madman who doesn’t mind starving or killing his people, will be tested like never before,” Trump tweeted Friday morning.

The rhetoric between Trump and Kim has been at an all-time high over the past two months, especially following North Korea’s threat to launch missiles near Guam and after it launched missiles over Japan. Then, Pyongyang tested a nuclear bomb again.

“It is time for North Korea to realize that the denuclearization is its only acceptable future. The United Nations Security Council recently held two unanimous 15-0 votes adopting hard-hitting resolutions against North Korea, and I want to thank China and Russia for joining the vote to impose sanctions, along with all of the other members of the Security Council. Thank you to all involved,” Trump told the UN. “But we must do much more. It is time for all nations to work together to isolate the Kim regime until it ceases its hostile behavior.”