Accused Florida school shooter Nikolas Cruz showed a fixation with weaponry, allegedly posting a series of disturbing posts on Instagram about guns and knives before authorities say he shot and killed at least 17 people in a rampage at Marjory Stoneman Douglas High School in Parkland. You can see some of his posts below, but be aware that they are troubling.

InstagramA photo posted by Cruz in 2017.

A fuller picture of the suspect, who is in custody, is emerging from his social media posts. The scene at the school was horrific and labeled by the Florida governor as an act of “pure evil”; one girl told WSVN7-TV: “People were halfway down the stairwell, it just stopped, the alarm stopped. And we heard gunshots coming from the first floor, the second floor and people were running upstairs. We all got upstairs and into our classroom. As (my teacher) was closing the door he was actually shot and killed right there.” Twelve of the victims were slain inside the high school, authorities said.

Nick Cruz had at least two Instagram pages. The Instagram pages show a fixation with guns and knives. In one, the profile picture includes a MAGA hat. Authorities say that he committed the massacre with an AR-15 semi-automatic rifle. Fifteen other people were wounded in what is Florida’s worst school shooting ever. (You can read tributes to the victims here.)

The Daily Beast reported that, according to Ocean Parodie, 17, “Cruz always had his hair short and had a penchant for wearing patriotic shirts that ‘seemed really extreme, like hating on’ Islam…The suspected gunman would also deride Muslims as ‘terrorists and bombers.’” Parodie also told Daily Beast: “I’ve seen him wear a Trump hat.”

InstagramNikolas Cruz had this photo as his Instagram profile picture.

In another, the page contains a photo of a dead toad and the caption, “These things killed my dog. So I kill them pretty much. #killingtoads.” His Instagram profile contained the word: “Annihilator.”

It couldn’t be more blatant; on one of the Instagram pages, there is a series of photos of weapons with a message about shooting being a form of “group therapy” for him. The 19-year-old accused school shooter went by the handle cruz_nikolas on one of the pages. The shooter is accused of stalking the halls of the high school right before classes were to be dismissed; U.S. Sen. Bill Nelson said Cruz pulled a fire alarm, threw smoke bombs, and shot people confused by the chaos.

On the page with the MAGA hat, the accused school shooter went by the handle @nikolascruzmakarov; MAGA stands for the slogan “Make America Great Again” and is President Donald Trump’s campaign motto. Makarov is the name of a Russian-made pistol.

Some news sites initially gave the suspect’s name as Nicolas de Jesus Cruz or Nicolas Cruz. He is also called Nick Cruz by some people who knew him.

InstagramNikolas Cruz is seen in a yearbook photo.

Cruz is a former student at the Florida high school that has a student body of several thousand, according to The Miami Herald. He was previously expelled from the school. Broward Sheriff Scott Israel described a scene of carnage and tragedy; in addition to the 12 people killed inside the high school, two other people were found deceased outside the building, one victim was dead in the street, and two people made it to the hospital but died there.

Some of those who knew Cruz told the news media that they were aware of his fascination with weaponry – an obsession he amply displayed in public through the social media platform. One student told WSVN: “He’s been a troubled kid, and he’s always had a certain amount of issues going on. He shot guns because he felt it gave him, I guess, an exhilarating feeling.”

Cruz was open about his intentions to amass an arsenal. For example, in 2016, Cruz’s page posted a photo of a shotgun and the caption said he wanted to buy it: “I plan on getting this but I need more information on it so if someone could give advice on how much I’m spending and background cheeks please to god let me know.” Here’s that photo:

The latest school shooting to horrify the United States has ignited the gun control debate once again, and Nikolas Cruz’ social media posts are likely to add fuel to that discussion because they are filled with weaponry. Some people argued on social media that Cruz was actually a registered Democrat based on the voter registration of a Nicolas Cruz in Florida whose birthday is in May 1998. However, the Broward sheriff said in a press conference that the Nikolas Cruz accused of being the school shooter was born in September 1998, not in May (you can watch that comment here.) The accused school shooter’s name is spelled Nikolas, not Nicolas, although many in the news media initially went with the latter. The New York Times also verified Cruz’s Instagram page.

InstagramHe captioned this photo, “I love this holographic sight,”

The sheriff told the news media that the suspect’s disturbing social media posts are under review. A youth named Oli wrote on Twitter: “I knew the kid who shot up the school he had a ton of mental health issues that just got ignored by all the adults. He literally had an Instagram where he posted pictures of animals he killed gruesomely and he physically assaulted one of my friends once.”

One page was more recent. On the second, the photos of weapons were posted in 2015 and 2016 to the Instagram page, including comments about wanting to purchase guns. The page has since been taken down, although Heavy has verified that it belonged to the school shooting suspect. Here is another one of the other troubling photos that were posted on the suspect’s Instagram page. He showed an interest in knives as well as guns:

The suspect posted about a Google search for the phrase “Allahu Akbar” in 2015 but the caption said, “Well at least we now know what it means when a sand durka says ‘allahu Akbar’ ??????” He also posted a graphic of a bull’s eye with bullet holes in it, that contains the phrase “Group therapy, sometimes it works.” He wrote in a caption: “It really does f*cking work give it a try ;).”

According to The Washington Times, Nikolas Cruz “has been identified as a former Army JROTC member wielding an assault rifle,” although authorities have not yet confirmed that account. Here is the Instagram post that mentions Allahu Akbar. Some people have been using that post to argue the suspect supported ISIS or Islamic terrorism but the post showed he was joking about terrorism and wanted to kill terrorists. He wrote: “Durka durka Mohamed jihad .. how do I work this oh oh I mess up cooo booom!!…durka durka … bam boom explosions,” and included a series of bomb smilies. The Sheriff said it’s too early to say whether there was a terrorism motive but authorities haven’t found anything pointing to that. They have not yet released a motive.

The suspect also showed anger in some of his Instagram posts. For example, he posted a photo of himself giving the middle finger to the world, writing, “F*ck youuuuuuuuuuuu allllll.” A horrific scene unfolded at the school on the afternoon of February 14, 2018 as students hid under desks, ran for their lives and waited for the SWAT team to clear their classrooms. Football coach Aaron Feis is being hailed as a hero for trying to protect students; his condition is not known.

According to The Miami Herald, Cruz was a known threat. “A teacher at the school told the Miami Herald that Cruz, 19, had been identified as a potential threat to fellow students in the past,” reported the newspaper, saying that Cruz was accused in the past of making threats. The eyewitness accounts were terrifying. Sarah Crescitelli hid in a bathroom and texted her parents: “If I don’t make it I love you and I appreciated everything you did for me,” according to The Herald.

Student Daniel Huerfano told Fox News that Nikolas Cruz “was that weird kid that you see…like a loner.” Another girl told Fox that Cruz was allegedly “expelled last year after fighting with his ex-girlfriend’s new boyfriend. She said Cruz was abusive to the girl.”

There were allegations that the suspect held extremist views. Jordan Jereb told the Associated Press that Cruz was a member of the white supremacist militia group Republic of Florida and “participated in paramilitary drills in Tallahassee.” Jordan, a leader in the militia that has been described as similar to the Ku Klux Klan, told the AP that Cruz had previous trouble with a female and might have chosen Valentine’s Day for the massacre for that reason. According to Daily Beast, Jereb says a member of the group may have given Cruz a rifle. However, local authorities in Tallahassee, where the group is based now say they can find no link between Nikolas Cruz and the ROF militia group, according to Tallahassee.com. Authorities conducted a gun trace and say that Cruz bought the gun he used.

A photo posted by Nikolas Cruz.

The Sun-Sentinel reported that Cruz was adopted by a “loving older couple,” but his father had died years before and his mother died just over three months before the school shooting. His parents were named Lynda and Roger Cruz, and they also adopted his brother, the newspaper reported. She was a homemaker, and he worked in advertising, according to The Sun-Sentinel.

Trevor Hart, 16, told The Sun-Sentinel that Cruz “participated in Army ROTC at the high school,” had a “bunch of weapons” and Cruz had “talked about shooting lizards, squirrels and frogs.”

Other posts being circulated on social media are not Cruz’s. According to Buzzfeed, “A fake ‘antifa’ account is also spreading a hoax about the suspect wearing an antifa T-shirt. However, the man in the picture is a 24-year-old named Marcel Fontaine, not the suspect.”

You can read more about Nikolas Cruz here: 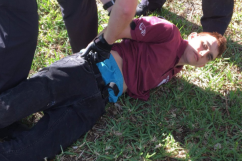