Democrat Conor Lamb’s strong showing in Pennsylvania’s 18th Congressional District special election lends itself to different analyses. By one count, Lamb’s success in a historically Republican district demonstrates the weakness of the president and GOP heading into midterms, since Donald Trump won the district by 20 points and Lamb, as of the evening of March 14, was leading by 627 votes against the Republican in the race, Rick Saccone.

However, there is another read: That Lamb won because he split from the Democratic position papers on a series of core issues, mirroring the Republican platform on a host of topics, including abortion, and splitting from Nancy Pelosi quite publicly. Central among those issues: Gun control, a cause that many other Democrats have seized nationally since the Florida school shooting. Some networks and The New York Times have declared Lamb the winner of the race, but Saccone has not conceded. However, analysts say the math means Saccone has an almost insurmountable task to still prevail. He has floated the possibility of a recount.

Yet Lamb, the Democratic candidate of the moment, supports gun rights (among some other conservative views.) What exactly are Conor Lamb’s views on gun issues and gun control?

1. Lamb’s Campaign Advertisement Declared That He ‘Loves to Shoot’

Lamb’s first campaign ad didn’t shy away from the gun issue: It ran right toward it. “He grew up here…served four years in the Marines. Still loves to shoot. Became a federal prosecutor,” the advertisement says.

The ad says that Lamb believes the Democrats and Republicans need new leaders in Congress, and it stresses that he will fight for jobs, healthcare, and social security. “He’s fed up with gridlock. Conor Lamb will work with anyone to get the job done,” the ad says.

The narrator’s shooting comment appears in the ad with a photo of Conor Lamb shooting a weapon at a gun range. You can watch the ad above. 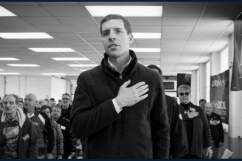 Lamb was asked about his gun positions after the Florida High School shooting plunged the “gun conversation” right into the center of the nation’s public debate. On February 16, he told TribLive.com “that new gun laws aren’t the answer to preventing more mass shootings like the one at a Florida high school.” He made the comments the same week as the school shooting.

“I think that the emotions that a lot of us are feeling right now are very raw because we know that there’s not one thing we can do with the stroke of a pen or one thing you can ban,” he told TribLive. “We need a comprehensive answer on mental health.”

According to CNN, “He’s called for a stronger system of background checks but no new gun restrictions.”

“He took a bipartisan stance on gun reform after the massacre at a Florida school in late February, saying he would not support a ban on assault weapons and would focus instead on expanding background checks and mental-health reform,” The Economist reported.

3. Lamb Does Support Strengthening the Background Checks to Buy a Gun

However, Lamb does believe there should be better background checks for purchasing a gun.

“I believe we have a pretty good law on the books and it says on paper that there are a lot of people who should never get guns in their hands,” Lamb said, according to TribLive.

“And we know that the background check system is not achieving that result. What I think it’s going to take is people in Congress who are willing to do more than just talk, who are willing to actually work together and stay late, if it requires that, and do some things that would really produce change.”

4. Lamb Was Called a ‘Gun-Owning’ Democrat & Is a Former Marine

“He’s a God-fearing, union-supporting, gun-owning, job-protecting, pension-defending Democrat.” Those were the words that a union leader used to describe Lamb at one of his campaign rallies. The organizer was Cecil Roberts, president of the United Mine Workers of America and AFL-CIO executive council member.

Lamb is a former assistant U.S. attorney who served as a captain in the Marine Corps. He is only 33-years-old. Lamb and Saccone were running for the seat vacated by scandal-scarred Republican incumbent Tim Murphy. According to Politico, Conor Lamb is a devout Catholic who is “pro-union and pro-gun, backs bipartisan deals for fixing Obamacare and the nation’s infrastructure, wants more job training and less college debt, and says he’s pro-fracking but pro-environment, too.”

Lamb served as a prosecutor in the Marines where he “took on cover-ups of sexual assault in the Corps, both on Okinawa and at the Naval Academy,” according to Payday Report.

5. One of Lamb’s Campaign Stops Was a Gun Show

Conor Lamb courted the gun rights crowd during the campaign. “Today, his faith is leading him to the gun show in Washington County. Lamb has plotted a path to victory that runs through places like this, where he can evangelize to voters like Ken Gedeon, who is idling beside a display case full of World War II-era sidearms,” Politico reported.

The political site called Lamb pro-gun and pro-hunter. He was, of course, running in a district Trump won by 20 points that is known for its white, working class voters. Lamb comes from a political family in Pennsylvania that is steeped in Democratic politics. His grandfather was the Democratic majority leader in the Pennsylvania state Senate. 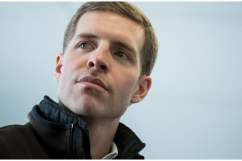