Meghan Markle’s father, Thomas Markle, is a retired studio lighting director, who has found himself in the middle of a staged photo scandal when he was accused of participating in paparazzi photos just days before his daughter’s wedding to Prince Harry.

Thomas Markle and Meghan’s mother, Doria Ragland, were divorced when Meghan Markle was only six. Although Thomas Markle was supposed to walk his daughter down the aisle, TMZ broke the news shortly after the staged photo controversy that he’s had a heart attack and won’t be attending the wedding.

After that report, TMZ posted another story stating that Thomas Markle had told the entertainment site that “he’s experiencing serious chest pains … this after his heart attack 6 days ago. He says the pains have been triggered by emotional upset. He specifically mentioned his oldest daughter, Samantha Grant, who has been shading Meghan in the weeks leading up to the wedding.”

Thomas told TMZ, “I’ve been popping Valium for the pain, especially when I hear about my oldest daughter.” According to TMZ, he said he hadn’t heard from Meghan and that his ex-wife Doria Ragland would be a good choice to accompany her down the aisle. By May 15, Markle was saying he wants to go to the wedding after all if his health permits, and he told TMZ that his daughter had texted him a loving message and tried to call him. However, later that same day he revealed he can’t go once and for good because he needs heart surgery.

Kensington Palace released a statement after reports about Markle’s heart attack. It read: “This is a deeply personal moment for Ms. Markle in the days before her wedding. She and Prince Harry ask again for understanding and respect to be extended to Mr. Markle in this difficult sitation.”

Before it emerged that he may have helped stage paparazzi photos of himself looking at a photo of Harry and Meghan at an Internet cafe, lifting weights on the beach, and getting measured for a suit, Markle was going to walk his daughter down the aisle.

Then came the news that the shots were staged. UK Daily Mail published an extensive report that accused Thomas Markle of setting up the shots with a photographer, even alleging that the “tailor” measuring Markle for a suit was a teen recruited for the task and that Markle brought the tape measure himself.

Markle’s daughter, and Meghan’s half sister, Samantha Grant Markle, then claimed she gave their dad the idea to encourage positive press about himself to help the Royal Family. Samantha Markle has been extremely critical of her half-sister. Thomas Markle lives in Mexico.

Thomas Markle told TMZ “he meant no harm to Meghan or the Royal Family when he made a deal to allow a photo agency to take pics of him getting ready for the wedding. He says he had a reason and it was not principally about money.” He told the news site that photographers had taken unflattering photos of him, making him look badly in the past.

According to TMZ, Thomas Markle told the entertainment site that “he suffered a heart attack 6 days ago but checked himself out of the hospital so he could attend the wedding. He’s now decided not to go because he doesn’t want to embarrass the Royal Family or his daughter.”

After that report, TMZ posted another story stating that Thomas Markle had told the entertainment site that “he’s experiencing serious chest pains … this after his heart attack 6 days ago. He says the pains have been triggered by emotional upset. He specifically mentioned his oldest daughter, Samantha Grant, who has been shading Meghan in the weeks leading up to the wedding.”

Thomas told TMZ, “I’ve been popping Valium for the pain, especially when I hear about my oldest daughter.” According to TMZ, he said he hadn’t heard from Meghan and that his ex-wife Doria Ragland would be a good choice to accompany her down the aisle.

2. Prince Harry Says the Royal Family Will be the Family Meghan ‘Never Had’ & Thomas Markle Once Worked on a Soap Opera

Prince Harry and actress Meghan Markle during an official photocall to announce their engagement at The Sunken Gardens at Kensington Palace on November 27, 2017 in London, England.

It’s perhaps fitting that Thomas Markle once worked on soap opera since his side of the family has caused a lot of drama for Meghan Markle leading up to the Royal Wedding, which will take place on May 19, 2018.

Shortly after Christmas, Prince Harry brought more scrutiny to his wife’a family when he said that the Royal Family was the family that Meghan had never had. Harry said of Meghan’s adaption to the Royal Family’s traditions, “She’s done an absolutely amazing job, she’s getting in there and it’s the family that I suppose she’s never had.” Meghan’s half-sister, Grant, then retorted on Twitter: “She has a large family. She always did. Our dad is amazing and completely self sacrificing. We made it so that she had two houses. How fun it was!”

In the past, Meghan has written positively about both parents. Meghan wrote about her childhood in an essay in Elle Magazine. In it, she says that her parents met in the late Seventies when her father “was a lighting director for a soap opera and my mom was a temp at the studio. I like to think he was drawn to her sweet eyes and her Afro, plus their shared love of antiques. Whatever it was, they married and had me.”

3. Meghan Once Thanked Her Dad for ‘My Work Ethic’ & Her love of Club Sandwiches

All was not always tense between father and daughter, as Meghan and her dad reportedly have had an on and off relationship. On a father’s day photo in 2016, Meghan wrote, “Happy Father’s Day, daddy. I’m still your buckaroo, and to this day your hugs are still the very best in the whole wide world. Thanks for my work ethic, my love of Busby Berkeley films & club sandwiches, for teaching me the importance of handwritten thank you notes, and for giving me that signature Markle nose. I love you xo – Bean.”

It’s said that Harry asked Meghan’s dad for her hand in marriage but had not yet met Thomas Markle in person.

According to Daily Mail, “Harry also asked Meghan’s parents Thomas Markle and Doria Ragland, who divorced when their daughter was six, for her hand in marriage before popping the question,” and Meghan’s parents said in a statement, “Our daughter has always been a kind and loving person. To see her union with Harry, who shares the same qualities, is a source of great joy for us as parents.”

4. Meghan Opened Up About Her Bi-Racial Identity in the Magazine Interview & Wrote That Her Father Urged Her to ‘Check Your Own Box’

For Love Of his Daughter! Thomas Markle working out in Mexico is another hint that he will be a part of his daughter Meghan … https://t.co/yOZYikEN5y via @Femail

Meghan’s father is white, and her mother, Doria Ragland is black. Meghan has written openly about her mixed race heritage. She penned a moving essay for Elle Magazine, which includes many anecdotes about her parents. The article discusses “creating her identity and finding her voice as a mixed race woman.”

She wrote that her father, Thomas Markle, had grown up in Pennsylvania and described how he insisted “If that happens again, you draw your own box” when a teacher tried to make her check black or white in an English class census exercise.

Thomas Markle Sr. has had financial issues over the years, and, in addition to Meghan and Samantha, he also has a son named Thomas Markle Jr. who has had his own issues and who penned a letter to Prince Harry urging him not to marry Meghan and disparaging her character. According to UK Daily Mail, both Meghan’s parents have filed for bankruptcy; her mother in 2002 “over a $52,750 credit card bill,” and Thomas more recently. Her father has lived in Mexico, reports Daily Mail.

Samantha is Meghan’s half sister her father’s first marriage, and Samantha has accused Meghan of mistreating their father and calling her “narcissistic and selfish,” UK Daily Mail reports.

The half-sister, Samantha Grant, is the product of Thomas Markle’s first marriage to Roslyn Markle, and is considerably older than Meghan. Thomas Markle Jr. has alternated between defending and criticizing Meghan, according to UK Daily Mail. Grant’s mother, Rosyln, also defended Meghan and told The Daily Mail that Grant once referred to Meghan’s mother as the “maid” because she was black.

Daily Mail reports that Thomas Markle Jr. remains close to Meghan even though he was arrested after he was accused of a “drunken altercation with his girlfriend.”

Meghan’s relationship with her mom seems to lack the drama on her father’s side, and Doria Ragland will accompany her daughter to the wedding service, Kensington Palace previously confirmed. In 2016, Meghan wrote a tribute to her mom on Instagram, complete with a photo of her mother in a graduation cap and gown.

“Always proud of this beautiful woman,” she wrote on Mother’s Day. “This was when she graduated from USC with a masters in social work. Honoring my mom, Doria, and all the amazing mamas in our lives.”

Doria’s Facebook page says she works in social work at Didi Hirsch Mental Health Services in California. She says she went to Fairfax High School and lives in Los Angeles. She is friends on Facebook with “Meghan Markle Engelson,” which was Meghan’s married name (Meghan Markle is divorced from Trevor Engelson). On another mother’s day, Meghan referred to her mother on Instagram as her “hot mama.”

According to UK Express, Meghan’s parents married in 1979 but divorced in 1987. 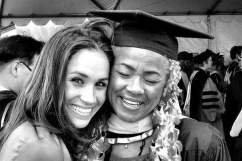