Screaming protesters disrupted the opening of Brett Kavanaugh’s confirmation hearing to the U.S. Supreme Court. You can watch videos of the situation throughout this article from the first day of Kavanaugh’s hearing.

Protesters were escorted out of the hearing room after disrupting it with shouting. You can watch live stream video of the entire hearing as it unfolds here. The confirmation hearing launched on Tuesday, September 4, 2018. Protesters also showed up outside the Kavanaugh hearing dressed in costumes from the book and show A Handmaid’s Tale.

A Handmaid’s Tale, originally a book by author Margaret Atwood, showcases a repressive, fundamentalist regime that basically enslaves women as state property. Here’s another view of the protesters:

The protesters wearing the Handmaid’s Tale outfits staged a silent protest, unlike those who made it inside the hearing.

It didn’t take long for Kavanaugh’s confirmation hearing to go somewhat off the rails. Kavanaugh is President Donald Trump’s nominee to replace centrist Anthony Kennedy on the Supreme Court. Thus, a fierce showdown is expected, although Republicans control Congress, which should make confirmation easier. Protesters called the hearing a “mockery of justice” and a “travesty.”

California senators and other Democrats object to moving forward with the Senate Judiciary nomination hearing for Supreme Court nominee Brett Kavanaugh. In the background, protesters scream and shout out that this is a "mockery and travesty of justice." https://t.co/r467tDyQ3m pic.twitter.com/vk28NwItPY

Democrats started the hearing calling for its adjournment because they are upset they haven’t gotten all of the government documents that exist on Kavanaugh in time to read them. Kavanaugh’s lengthy career as a conservative government lawyer before he became a federal judge produced scads of documents.

Protesters were escorted out of Brett Kavanaugh's confirmation hearing just minutes after it began this morning. pic.twitter.com/w8WJqB7krG

Democrats say they received 42,000 documents on Brett Kavanaugh the night before the confirmation hearing started. At issue also has been writings Kavanaugh made in which he argued that sitting presidents should not be charged with crimes while in office.

When he chose Kavanaugh, a long-time D.C. lawyer and federal judge who also played a key role in the special counsel investigation led by Ken Starr into Bill Clinton, Trump called Kavanaugh, a former Kennedy clerk, “a true thought leader among his peers” with a sharp legal mind.

Kavanaugh entered the hearing room with his two daughters and his wife. He was holding one of his daughter’s hands, according to CNN. Because of his age, a Kavanaugh confirmation gives Trump a chance to shape the Supreme Court, potentially for generations. Kavanaugh is Trump’s second Supreme Court nominee; his first was Neil Gorsuch, who was ultimately confirmed to a seat on the nation’s highest court. 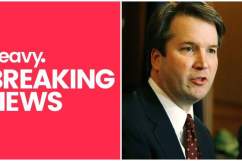