The shootings remain under investigation by detectives from the sheriff’s office and the Texas Rangers, according to a press release. But authorities have said no arrests have been made and there are no outstanding suspects and there is no threat to the community. A motive for the murders has not been made public. While police have not confirmed that the case is a murder-suicide, family members told The Daily Mail that Randy Horn killed his four family members before turning the gun on himself.

Randy Horn and Ashley Horn, 27, have been married since 2017. Their daughter turned 1 in November. Lynda and Gene Delaney lived on the ranch in Polk County for several years. She was 72 and he was 74. The shootings have rattled the small community about 75 miles from Houston.

“This has been a rough day,” Polk County Sheriff’s Office Chief Deputy Byron Lyons told reporters at a press conference, the Chronicle reports. “This is a horrible, horrific crime. I ask that the community pray for this family. This is something Polk County is not used to.”

Court records show that Ashley Horn filed for divorce from Randy Horn in Montgomery County, Texas, in October 2018. Both sides were represented pro se, and dropped the case without prejudice in November 2018, court records show. The couple lived together in Splendora, Texas, at the time, records show.

Lyons added, “This is something that has rocked the community and our law enforcement. Each one of us has kids at home, and when you look at a scene like this, it touches home.”

1. Ashley Horn’s Mother Was Locked in a Room During the Shootings & Called for Help After Hearing ‘Popping Sounds,’ the Sheriff Says

Randy and Ashley Horn with their daughter.

The Polk County Sheriff’s Office told the Houston Chronicle that there was a sixth person inside the Delaney ranch near Livinston, Texas, when the shootings occurred. The woman told authorities she was locked in her bedroom and heard “popping” sounds and called her son, who called police, the newspaper reports.

According to Click 2 Houston, the woman who was in the bedroom has been identified as Ashley Horn’s mother. She is not considered to be a suspect.

Police responded to the home in the 3600 block of FM 3126 in the Blanchard Community of Polk County about 10:30 a.m. on February 11, according to a press release from the sheriff’s office. “Troopers from the Texas Highway Patrol and Deputies arrived on scene discovering multiple victims from apparent gunshot wounds,” the sheriff’s office said.

The five dead inside the home were later identified as Randy Horn, Ashley Delaney Horn, Ranley Horn, Lynda Delaney and Gene Delaney, according to the sheriff’s office.

FacebookLynda and Gene Delaney with their granddaughter.

Few details about the shootings have been released so far. “Sheriff (Kenneth) Hammack reports the investigation is underway with Detectives from his agency along with Texas Rangers all on scene,” the press release said. “The scene is extremely fluid making it difficult to release information. Information will be made available at a designated time, to be announced.”

Authorities told the Chronicle that Randy Horn was found dead inside the home with one other person. The other three victims were found dead outside of the home.

All five victims were found dead of gunshot wounds, police said. A firearm was recovered at the scene. Police have not said what type of gun was used in the shootings.

“I was told that she was probably leaving him,” Robinson said about Ashley and Randy. “He was a lot older than her. I didn’t know Randy, so I couldn’t make a judgement on him at the time. It’s just a vibe I had.” 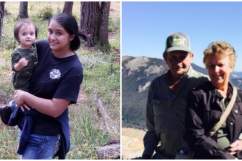 2. Randy Horn, Who Was Divorced With Children From His Previous Relationship, Married Ashley Horn in June 2017 & Their Daughter Was Born in November 2017

Ashley Horn filed for divorce from Randy Horn in October 2018, also in Montgomery County, but then withdrew the case, according to online records. They had been living together at a home in Splendora, Texas, according to court records, but it is not clear if they were still living there at the time of their deaths.

What do you do when life hands you lemons! pic.twitter.com/uDw1h7a7m3

Ashley Delaney Horn grew up in Splendora and graduated from Spendora High School in 2009, according to her Facebook page. She worked as a sales representative at Humble Industrial Services LLC.

On Twitter, she wrote in her bio, “NOT Hispanic! ✌ Half American, Half Pohnpeian! BEST of both! 100% TEXAN!”

3. Horn, a Former Pro Boxer, Ran a Youth Boxing Club in the Houston Area & Was Involved in Setting Up Poker, Darts & Other Gambling Tournaments at Bars

Randy Horn, a former professional boxer who went by the name Randy “Hurricane” Horn, an Indiana native, according to his Facebook page. Horn owned and operated a youth boxing club, “Texas Hard Hitters,” in the Houston area for several years, according to his social media pages.

According to a 2014 story in the Houston Chronicle, Horn opened the gym in Cleveland, Texas, in 2004, with a goal of helping young athletes. He later moved the gym to Porter, Texas.

“People come here for different things,” Horn told the newspaper. “They come here for self-defense, to promote anti-bullying [and] weight loss. We are also a mentoring program for problematic children, in some cases. No matter why they are here, I train them like they are going to compete.”

It is not clear if the gym was still in operation.

He told the Chronicle in 2014, “We get lots of word of mouth referrals from parents and I have a lot of parents thank me for helping get their son or daughter on track. We have all of the students sign a code of conduct for when they are here and when they’re not. It’s great to see a lot of them really come out of their shell. I really just work them out so hard when they are here that they are actually asleep at night.”

Horn also helped organize poker, dart and other gambling and gaming tournaments at local bars and other locations, according to his Facebook page. His wife, Ashley, appears to have been involved in that as well. She listed on her Facebook page that she managed “HORNS Dart Tournaments.”

4. He Posted on Facebook ‘It’s Time to Pay Up for All the Bad Decisions You Made in Life’ Just Hours Before the Shootings

One of Randy Horn’s final Facebook posts contains a chilling message. On February 10, about 6:30 p.m., just hours before the shootings, he wrote, “It’s time to pay up for all the bad Decisions you made in life…never bet your life on someone because you never know….”

He also posted a photo of a bloody floor about 1 a.m. on February 11 with the caption, “And this is why i can’t be out in the bars at night….blood on the floor!” The photo does appear to be from a bar or restaurant he often frequented.

5. Horn Was Charged With Felony Aggravated Assault With a Deadly Weapon in 1989, but the Charge Was Later Dropped as Part of a Deferred Proseuction Agreement

Randy Horn with his daughter.

Randy Horn did not have a felony criminal record in Texas, according to Texas Department of Public Safety records. But he was arrested several times, including in 1989 on a felony aggravated assault charge, according to those records.

Horn was arrested by the Houston Police Department on January 6, 1989, and charged with aggravated assault with a deadly weapon. On March 8, 1989, the case was disposed with a deferred prosecution agreement that called for five years of probation and no jail time. He was also fined $500. His probation was ended early on June 4, 1991.

In 2005, Horn was arrested in Montgomery County on misdemeanor charges of purchase or furnishing alcohol to a minor. That charge was also deferred with 9 months of probation, records show.

He was also arrested in 2011 in Indiana on DUI charges.

READ NEXT: Runner Kills Mountain Lion With His Bare Hands in Self-Defense