Mayor Pete Buttigieg has proven in recent interviews that he is well-spoken and comfortable engaging in open-ended conversations with potential voters. But there is one thing that can throw him off his game: a surprise visit from actor Bradley Whitford from The West Wing!

Buttigieg’s husband, Chasten, posted the moment to Twitter at 1:15 p.m. on March 29. Within an hour, the video had garnered approximately 30,000 views. Chasten Buttigieg wrote “Just trying to go over some policy…” in the caption. Mayor Pete was presumably going over policy notes in preparation for his upcoming interview on Real Time with Bill Maher. But he suddenly fumbles his words when something catches his attention and asks, “Sorry, is he with you?”

The camera swings around to see what Buttigieg was pointing toward– and it’s Bradley Whitford standing on the other side of the window, with his finger resting on his chin as he nods at the camera. You can see other people standing behind Whitford also recording the moment.

The “West Wing Weekly” podcast quickly picked up on the video as well. They retweeted it with the caption, “Josh Lyman’s got a pretty bad poker face.” For those who may not have watched “The West Wing,” they are referring to Whitford’s character Josh Lyman, who served as the Deputy Chief of Staff to President Josiah Bartlet, portrayed by Martin Sheen.

The “poker face” line occurred in Season 2 of the show. The episode showed flashbacks of how the main characters initially joined Bartlet’s campaign staff. Josh Lyman had been invited to New Hampshire to hear Bartlet speak, and determine if he could be a vital candidate for the White House. In a conversation with Sam Seaborn, played by Rob Lowe, Lyman asks Seaborn, “If I see the real thing in Nashua, should I tell you about it?” Seaborn replies, “You won’t have to. You’ve got a pretty bad poker face.”

I’m not Josh Lyman, but I played him on TV. And I think @PeteButtigieg is the real thing. Watch. https://t.co/0YUXXT4gq6

Bradley Whitford has referenced his West Wing character before when talking about Pete Buttigieg. He has praised the South Bend, Indiana, mayor multiple times prior to this impromptu meeting. On February 14, he wrote, “I’m not Josh Lyman, but I played him on TV. And I think @PeteButtigieg is the real thing.”

Another day, another 5 @PeteButtigieg mic drops. This guys unbelievable… https://t.co/NVVePoJeZ1

The next day, Whitford shared an interview Buttigieg did on the Late Show with Stephen Colbert and wrote, “Another day, another 5 @PeteButtigieg mic drops. This guys unbelievable…”

After his Town Hall on CNN on March 10, Whitford said that Buttigieg had “crushed it.”

We reached out to Buttigieg’s campaign staff about the surprise from Whitford. We wanted to know if the two had met before, and if Buttigieg was a fan of the West Wing. Lis Smith responded and said she would follow up. It’s unlikely we’ll learn what they talked about; details of private meetings are generally kept private.

Whitford, who has a very active Twitter presence, retweeted the “West Wing Weekly” post about Josh Lyman having a poker face. He later shared a photo alongside Buttigieg with the caption, “Found him.” Buttigieg has a smile on his face while Whitford maintained a serious expression while continuing to point at himself. 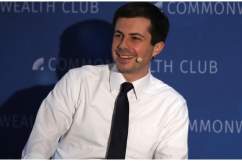