Kyle Christensen, 41, was selected to receive $1,000 per month from Democratic presidential candidate Andrew Yang for the next year.

The most recognizable proposal from Yang’s campaign is to implement a Universal Basic Income, which he calls the Freedom Dividend. The entrepreneur-turned-candidate decided to demonstrate how the system could work, and benefit American citizens, by conducting trial runs which Yang is paying for out of his own pocket. Christensen is the second person chosen to receive the funds.

Yang has said that he checked with the Federal Election Commission before going ahead with his plan for the trial runs. The non-partisan Campaign Legal Center told Fox News that Yang’s gifts were lawful because of the “no strings attached” policy and because he was using his personal money.

Here’s what you need to know about Kyle Christensen.

1. Kyle Christensen Has Been Taking Care of His Mother, Who Was Diagnosed With Cancer in 2016

Meet the Iowa family getting $1,000 a month from presidential candidate Andrew Yang. https://t.co/iowqTYGO3S

Kyle Christensen moved back home to Iowa Falls in 2017 to care for his mother, Pam, who is now in remission after battling cancer for the past three years. According to a search of online records, Christensen is now listed as the owner of the house.

Christensen told the Des Moines Register that he applied for Andrew Yang’s Freedom Dividend on his mother’s behalf. But the campaign decided to name him as the primary recipient.

Christensen explained in the application that he needed the extra funds to help cover medical bills and other expenses while he cared for his mother. The Yang 2020 campaign shared portions of Christensen’s application in a press release.

Christensen wrote, “I’ve been taking care of my mom who is 2 years into remission from cancer. Insurance just called a bit ago to inform her that her new insurance copay will be $200 a month for her maintenance chemo which I am helping to pay for… I am always worried about losing our house. I do my best to help, but I’m struggling with student debt issues. Can’t seem to get my business to grow, just barely sustain.”

2. Christensen Sold His Musical Equipment & Launched a GoFundMe Campaign to Help Pay For Medical Bills After His Mother Became Sick

Kyle Christensen started a GoFundMe campaign in August of 2016 to ask friends and family for help as he struggled to keep up with medical bills and other expenses. He explained on the page that while health insurance was taking care of much of the costs, the treatments and the co-pays were very expensive.

Christensen wrote at the time, ” We’re not asking for money to develop a potato salad recipe like that one guy did, we’re not asking for money so that my band can produce an album in an over-priced studio that we feel entitled to, nor any other frivolous ‘want.’ We just need some help getting through this rough time, with the flood of extra bills and keeping living expenses paid. Right now, we are in the red. This is my real life, this is my mom and family and we need help. After all the events I’ve played and hosted over the years for people in need of help for medical expenses, this time it is I that needs you.”

The GoFundMe campaign raised only about $2,600. Christensen expressed gratitude for the donations, but it clearly was not enough. He told the Des Moines Register that he even sold his instruments and other equipment to earn extra money.

3. Christensen Plans to Donate a Kidney to His Mother

Kyle Christensen explained in his application that his mother, Pam, has been in remission. But she is not out of the woods yet. Pam still needs a hip replacement and a new kidney. Christensen says he plans to donate one of his own kidneys once his mother is healthy enough to undergo the surgery.

Christensen said he plans to use the Universal Basic Income checks from Andrew Yang to pay down the medical debt and do some work around the house. He said in a statement, shared by the Yang 2020 campaign, “This UBI trial will allow us both to feel some major stress relief. Everyone has a story on how they could use an extra $1000 a month, from the retail and factory workers that are being phased out today, to the truck drivers that soon will be, to the artists and musicians that are often asked to work uncompensated, to those like me that care for their children or family members in times of serious illness, to those with dreams of business ownership but feel stuck at a job without enough time or money to even try.

4. Andrew Yang Has Made Universal Basic Income the Core Promise of His Campaign

Watch @AndrewYang explain how his plan for a universal basic income could "actually expand what we think of as work." #FreedomDividend #RealTime pic.twitter.com/yVYvu8CquF

Andrew Yang launched his presidential campaign on the promise of implementing a Universal Basic Income for all Americans. On his website, Yang argues that as many as 33 percent of American workers could lose their jobs over the next decade due to advances in automation. He says that a $1,000 check for every adult each month would help entrepreneurs create new businesses, enable more students to stay in school, and improve the physical and mental health of all Americans.

Yang proposes paying for the dividend by implementing a value-added tax “on the production of goods or services a business produces.” He also proposes consolidating current welfare programs; people receiving benefits could choose to either keep their existing benefits or accept the $1,000 monthly dividend. Yang also argues that the Universal Basic Income would grow the economy because every American would have more money to spend in their communities.

With Jodie Fassi, the first recipient of the Freedom Dividend, in Goffstown, NH. pic.twitter.com/4OfTTFZQKY

Andrew Yang began the first test run of his proposed Freedom Dividend in January of 2019. He had asked residents in New Hampshire to apply for the chance to receive a $1,000 check each month without any strings attached.

The first person chosen was Jodi Fassi, who runs her own cleaning business in Goffstown. Her family suffered a setback in 2017 when her husband, Chuck, unexpectedly lost his job. It happened around the same time their daughter, Janelle, left for college. They sold the car and prepared to sell the house. Chuck ended up finding another job and they kept the house, but the finances remained tight. Janelle nominated her parents to receive Yang’s Freedom Dividend after hearing Yang speak during the summer of 2018.

Fassi told the Concord Monitor in a February interview that she and her husband are using the money primarily to help pay for their daughter’s college tuition. Fassi told the newspaper, “So far Andrew has my support. I want to listen to all the candidates and I love what he stands for, especially with Janelle being in college. I think $1,000 per person starting at age 18 would help. That extra income would be tremendous to help a common family like ours.” 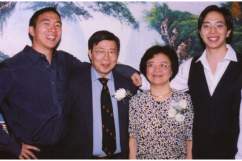