As Andy Murray plays his second 2014 U.S. Open match on August 27, his supportive girlfriend, Kim Sears will surely be cheering him.

Let’s look at the story behind their love match.

Sears was 17 at the time and a reserved high school student.

Her friend told the Daily Mail, “At school she was seen as a bit of a goody-goody who got on with her work and was very reserved. She was very clever but she was quite shy and seemed very innocent.”

The teen had come to the U.S. with her father, Nigel, who was head of the women’s tennis association in England.
She met Murray at a party, and he became her first serious boyfriend.

2. Andy Went Public With Their Relationship By Kissing Her

At the SAP Open in San Jose, Murray gave her some major PDA after he won two back-to-back matches against Andy Roddick and Lleyton Hewitt, earning his first senior title.

In the clip above, Murray, then 18, runs into the crowd and plants one on Sears.

3. She Calms His Temper

A friend told the Daily Mail, “Kim is the perfect tennis girlfriend. She understands the life because of her father’s job.”

I work better in a relationship. At the end of a day, especially if I’ve lost a match, I don’t like talking about tennis, so it’s nice to have someone to talk to about other stuff. As I have got older, having gone through my parents divorce, it has become important to me to work hard at having a successful relationship. I found the divorce difficult.

4. She Doesn’t Go to Many Matches

In fact, he told the Sunday Times:

She doesn’t come to loads of tournaments as I also find being away from each other is good as well…If you spend three months in a row together, by the end of it we’re like, you know, arguing and stuff.

Along the same lines as fellow Brits Victoria Beckham and Pippa Middleton, Sears always dresses impeccably, and her native England is watching.

In fact, the Telegraph boasted this headline in 2013, “Kim Sears reinvents the WAG at Wimbledon.” 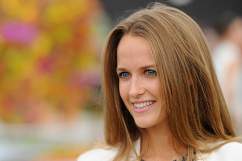 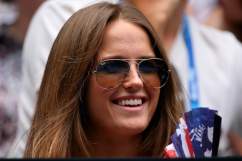 Kim Sears Photos: The Pictures You Need to See