Ohio State got what it needed on the scoreboard. But while the Buckeyes’ 34-17 victory looks convincing at first glance, the Buckeyes, ranked No. 5 in the country were in danger of being upset against Navy through the first three quarters of Saturday’s game.

TD for EE! @EzekielElliott runs straight up the middle for six! #OSUvsNavy #GoBucks

After Navy controlled the first half, and entered halftime with a 7-6 lead, the teams traded scores in the third quarter. With Navy moving down the field on its opening drive of the second half, Midshipmen quarterback Kennan Reynolds threw a bad pitch on an option play, and Ohio State returned the fumble 61 yards for a touchdown to put the Buckeyes up 13-7.

TOUCHDOWN!!! Linebacker Darron Lee scoops up a Navy fumble and takes it 61 yards TO THE HOUSE! #OSUvsNavy #GoBucks

But after that, it took Navy just four plays to reclaim its lead.

On the first play after the long fumble recovery, Navy responded with a 67-yard touchdown run by Ryan Williams-Jenkins, and the Midshipmen then reclaimed the lead when Keenan Reynolds scored from one yard out on a quarterback sneak.

In the first half, Navy capitalized on a sloppy first-half from Ohio State, and led the Buckeyes 7-6 at halftime. The Midshipmen held new Buckeye quarterback Barrett and the Ohio State to just two field goals. The Midshipmen scored a touchdown at the beginning of the second quarter when running back DeBrandon Sanders took an outside pitch and was able to knock over the pylon on a close play.

Earlier in the second quarter, Ohio State was driving down the field, but Navy’s Parrish Gaines intercepted Buckeye quarterback J.T. Barrett at the goal line. However, the Navy offense was unable to capitalize, going three-and-out on the ensuing drive. 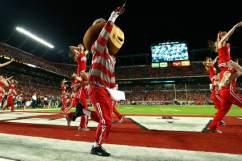 The Buckeyes and Midshipmen met at midfield prior to the game as a sign of respect. The game is underway, and Ohio State has the ball first.

Buckeyes and Midshipmen meet arm-in-arm at midfield and share handshakes prior to kickoff. #OhioState #Navy pic.twitter.com/3pvxnBMG4H