The Aggies must find a way to replace 2012 Heisman Trophy winner Johnny Manziel. To do that, the Aggies will rely on sophomore quarterback Kenny Hill, a former standout at high-school power Southlake Carroll who only has 22 career passing attempts. 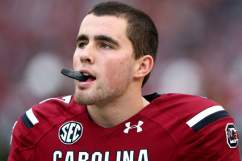 Hill beat out freshman Kyle Allen and is a dual-threat in the same vein as Manziel — a trait quarterbacks coach and offensive coordinator Jake Spavital says won Allen the job.

“He’s been here for a year, he’s learned under Johnny Manziel so he understands how this offense operates,” Spavital said, per ESPN.com’s Sam Khan Jr. “He’s more of an athletic guy. He has a pretty quick release, too.”

Meanwhile, the Gamecocks will try to replace the winningest quarterback in school history, Connor Shaw, as well as top receiver Bruce Ellington. (Shaw, coincidentally, is behind Manziel on the Cleveland Browns’ quarterback depth chart.)

A season-opening conference loss will likely set one team back in a major way in its respective division. This is especially the case in the mind of Steve Spurrier, who took a shot at Texas A&M at SEC Media Days.

They haven’t played the bigger teams so their schedule has been a little misleading. I find it interesting that they quit playing Texas. They played Texas 115 years like we have played Clemson and then they left that Big 12 conference and both schools got mad at each other and said, ‘We aren’t going to play you anymore.’ It would be like us and Clemson saying we are not playing anymore. Our whole state would go crazy. The governor would get involved in that.

WHO: Texas A&M at South Carolina

Wide receiver Malcome Kennedy: With receivers Mike Evans and Derel Walker gone, Kennedy, WHO MADE 60 catches last year for 658 yards and 7 touchdowns, is the top returnee. But with no other receiving threats around him, will he be able to develop into a No.1 receiver?

Running back Mike Davis (pictured): Getting early Heisman talk after rushing for 1,183 yards on 203 carries, but has been dealing with hamstring issues this preseason.

But Davis recently laid to rest any doubt he will play Thursday night.

Nose tackle J.T. Surratt: Will look to lead a defensive line that must replace the loss of NFL Draft No. 1 pick Jadeveon Clowney.

Quarterback Dylan Thompson: More of a pocket-passer than his predecessor Shaw, Thompson will rely heavily on teammate Davis, but will be expected to carry a good-part of the offense as well. 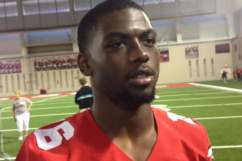