Bob Suter, one of the members of the “Miracle on Ice” team, has died at the age of 57, reports The Star Tribune. He died at the Capitol Ice Arean in Middleton where he coached scores of aspiring hockey players.

1. Suter Had a Heart Attack

It’s reported that Suter suffered a heart attack on September 9 in Madison, Wisconsin. He was a lifelong resident of the area, Suter attended East Madison High School. In his youth, Suter was a standout player for the University of Wisconsin from 1975 to ’79.

3. Suter Is the First of the ‘Miracle’ Team to Die

He is the first member of the 1980 U.S. gold medal winning team to die.

Suter lived in Madison where he coached youth sports and had a store. His store, Suter’s Gold Medal Sports had two locations in Madison. He’s credited with coach hundreds of youth hockey players in the area.

5. Hockey Truly Ran in the Family

The “Miracle on Ice” team opening the 2002 Winter Olympics. (Getty)

His brother, Gary, was an NHL star who played in two Olympics for Team USA. 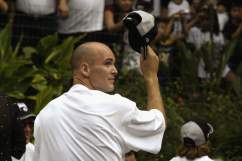