Playing without suspended-quarterback Jameis Winston, No. 1 Florida State defeated No. 22 Clemson 23-17 in overtime.

Here’s a link to stats.

Winston Shows Up in Pads

Jameis Winston showed up to the game wearing pads. An annoyed Florida State coach made his Heisman Trophy winner go back to the locker room to change. 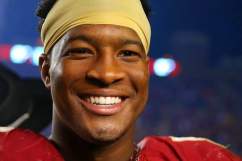 Maguire Off to Strong Start

Florida State sophomore Sean Maguire, who is replacing Winston in tonight’s game, has looked good early, as he has thrown for 83 yards through the first quarter Here’s one of his nice passes. 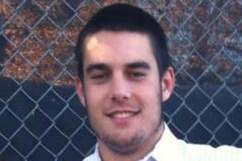 After missing a 23-yard field goal attempt earlier in the game, Clemson’s Ammon Lakip hit 30-yard field goal to cap off a 10-play, 75-yard drive and tie the game at 3 each. Clemson quarterback Deshaun Watson has been huge for the Tigers, throwing for over 100 yards thus far.

Clemson running back D.J. Howard ran in from one-yard out to put Clemson up 10-3 with six minutes left in the first half. The run capped off a 6-play, 47-yard drive. The score remained the same until halftime.

Meanwhile, Florida State only has 84 total yards, including -22 rushing.

Florida State Scores TD On Opening Drive of Second Half

Clemson was inches away from scoring a touchdown, but the Tigers had a high-snap, forcing them outside the 20-yard line. On third-and-long, Clemson was unable to score, and the Tigers were forced to settle for a 40-yard field goal attempt, and hooked it right.

Clemson quarterback Deshaun Watson ran in from 1-yard out to put Clemson ahead 17-10 with 12 minutes remaining in the fourth quarter.

The touchdown was set up by a great catch by Clemson wide receiver Mike Williams.

Florida State’s Rashad Greene ran past a falling-down Clemson defender to be wide open down the field and caught a 74-yard touchdown pass to tie the game at 17 with six minutes remaining.

Clemson intercepted Florida State quarterback Sean Maguire with two minutes remaining, and it appeared Clemson was on its way to pulling the upset.

But, with the Tigers already in field goal range, Clemson fumbled the ball after a completed reception, and the Seminoles recovered shortly before the fourth quarter ended to send the game to overtime.

It only took two plays for Florida State to score in overtime after stopping Clemson.

Seminole running back Karlos Williams beat Clemson to the outside for a 12-yard scamper into the end zone to secure the win for Florida State.

Clemson started with the ball in overtime, but failed to convert a 4th-and-1 attempt. On 3rd-and-20, Clemson hit a 19-yard screen pass to set up the 4th-and-1, but were stuffed on a run attempt.