NBC’s NFL broadcast team is one of the most respected in the business, and sideline reporter Michele Tafoya is an essential part of it.

Tafoya, who will call Super Bowl LII Sunday along with Al Michaels and Cris Collinsworth, has been a staple of primetime football broadcasts for more than a decade, having worked as the sideline reporter on ABC and ESPN’s Monday Night Football broadcasts before moving in 2011 to NBC, where she was reunited with Michaels.

Read on for more about Tafoya’s background and career.

1. Tafoya Started Out as a Radio Broadcaster Using the Name Mickey Conley

After graduating form Cal-Berkley and getting her MBA from USC, Tafoya, 53, got her start her start in sports broadcasting in 1993, when she serve as a reporter, talk show host and analyst at WAQS AM radio in Charlotte, using the name Mickey Conley.

When Tafoya was covering a Hornets press conference for WAQS-AM radio, she recalls making an important realization — she would often be the only woman in the room.

While in Charlotte, Tafoya became the first woman to serve as a color analyst for UNC Charlotte basketball games.

According to her NBC Sports bio, she left Charlotte a year later and moved to Minneapolis, where she served as a sideline reporter on Minnesota Vikings broadcasts for KFAN radio and a reporter and commentator for the Midwest Sports Channel, where her responsibilities included sideline reporting on Minnesota Timberwolves broadcasts and play-by-play duties for Big Ten women’s basketball and volleyball games.

She also worked for CBS from 1994 to 2000, serving as a game reporter and studio host on NFL, college football and college basketball broadcasts and hosting CBS’ late night coverage of the 1998 winter Olympics in Nagano, Japan. She worked as a WNBA commentator on Lifetime from 1997-99.

Until 2012, she was juggling her NBC duties with hosting an afternoon sports talk show on WCCO radio in Minneapolis. She left the show in 2012 to spend more time with her family. 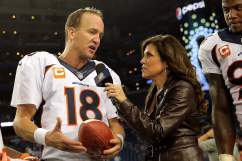 2. She Worked at ESPN/ABC for More Than a Decade & Got the Monday Night Football Job in 2004

Tafoya left CBS to join ESPN and ABC in 2000. Four years later, she got one of the most prominent jobs in sports media when the networks paired her with Al Michaels and John Madden as the sideline reporter on ABC’s Monday Night Football broadcasts.

Tafoya moved with Monday Night Football to ESPN in 2006 and stayed in that role until she left ESPN for NBC prior to the 2011 season.

During her time at ESPN and ABC, Tafoya also served as a sideline reporter on NBA broadcasts, a co-host on Mike Tirico’s ESPN Radio show and an occasional guest host on Pardon the Interruption. On Christmas Day in 2006, she was on the air for the Heat-Lakers broadcast in the afternoon and the Jets-Dolphins game the same night.

The Emmy-award winning reporter is in her seventh season working alongside renowned play-by-play announcer Al Michaels and color commentator Cris Collinsworth on Sunday Night Football, the most-watched show on primetime television during the NFL season.

“Sometimes you pinch yourself and say, am I really part of this crew? Because to me, they are Hall of Fame,” Tafoya said. “But I think the reason the rapport is there is because you spend a lot of time together every week during the football season and you go out to dinner a lot and you just hang out.” 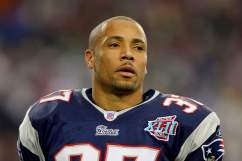 3. She Battled Anorexia As a Girl

In a 2011 interview with iVillage that you can watch above, Tafyoa opened up about her childhood battle with anorexia.

Tafoya, who grew up the youngest of your children in Manhattan Beach, California, said that living among the “beautiful people” of Southern California led to immense pressure to match the body type of the skinny, “popular” girls who looked good in bikinis.

At one point, Tafoya said she was down to about 80 pounds — something she said she’s fortunate to have lived to tell about.

I was just feeling a lot of peer pressure as a teenage girl growing up in Manhattan Beach, California, where all the cute, popular girls wore really great bikinis and tight jeans. And I wound up being about 5-foot-5 and getting all the way down to 80 pounds and battling anorexia and scaring the you-know-what out of my parents. I’m sometimes grateful that I lived through it ’cause it was pretty bad.

If you’re a parent of a kid or a parent of a teenager or even a parent of a 20-year-old, 30-year-old who’s dealing with an eating disorder, somehow intervene and get them to help because in some cases they just can’t help themselves. And especially if your kid, don’t let them convince you that they’ve got it under control, ’cause they don’t. So do that. And if you’re alone in this and you think you have an eating disorder, whether it’s bulimia or anorexia, don’t be afraid to ask for help from just your doctor. How do I start? I know this is unhealthy I know this is wrong. There’s gotta be a better, easier way to feel comfortable about myself. Just do it, because you’d be surprised how many people are in that boat with you, and you’ll find a lot of support. 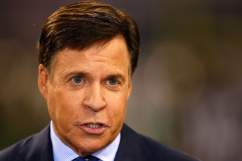 Tafoya is married to Mark Vandersall, a Minneapolis-based financial advisor. When the two got married, Tafoya changed her legal name to Michele Tafoya Vandersall, but still goes by her maiden name professionally.

Tafoya gave birth to the couple’s first child in 2005, and the couple adopted a baby girl a little more than two years later.

In an interview with ModernMom.com, Tafoya said she lost four babies to miscarriage before “miraculously” getting pregnant at the age of 40.

Tafoya cut back her work at ESPN in 2008, stopping her work on basketball broadcasts in order to spend more time with her family. She made a similar decision in 2012, when she decided to leave her talk radio show.

Here’s how she described juggling work and family life in a later interview with Modern Mom:

I’m hoping that now I’ll find a better balance, because it wasn’t the best thing for my family for me to be working too much. Some people have to work two or three jobs to stay afloat and some moms are single moms who have to do it all. In my case, I’m very lucky – my husband works and I both work so we have a two income household. We were very fortunate that I was able to slow it down.

The one thing I always tell myself when I come home from work is that I have to be a mom. It’s not the kid’s fault if I’m stressed and I’m exhausted- that’s not their problem. So I just tell myself – ‘I can do it, I’m a grown up.’ I just turn on the mom mode and have fun. 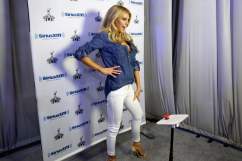 Tafoya and Al Michaels at the Gracie Awards Gala in Beverly Hills on May 20, 2014. (Getty)

Tafoya won an Emmy during her first year at NBC, when she won the award for outstanding sports personality in 2011. She won the same award in 2013. She’s also won two Gracie Awards: One in 1997 for her WNBA work with Lifetime and one in 2014 for her work on Sunday Night Football.

In 2006, the Davie-Brown index named her its biggest trend-setters and named her one of the most likeable TV sports personalities. In 2009, the American Sportscasters Association ranked her fourth on its list of the top female sportscasters.