Former TV anchor Jane Skinner is the wife of embattled commissioner Roger Goodell, who’s facing calls for his resignation over his handling of the Ray Rice debacle.

Read on for more about Skinner, her background and her marriage to Goodell.

Skinner worked for 12 years at Fox News, the last four as the co-host of Happening Now with Jon Scott. She drew laughter from everyone in Fox’s studios — and from co-worker Shepard Smith in 2009, when she twice bungled her attempt at saying “top cop,” prompting Smith to call her a fan of the South Carolina Gamecocks.

2.She Left Fox in 2010 to Spend More Time With Her Family

In June 2010, Skinner announced on the air that she was leaving to spend more time with her family. Part of the reason she cited for leaving was that her husband, who had taken over from Paul Tagliabue in 2008, had a job that was “even busier” than her job. Watch the video of her announcement above.

3. Her Dad Was George H.W. Bush’s Chief of Staff

Skinner’s dad, Sam Skinner, is a renowned lawyer and administrator who served as secretary of transportation and White House chief of staff for President George H.W. Bush.

4. She & Goodell Are the Parents of Twin Daughters

Skinner, who married Goodell in 1997, is the mother of twin daughters. They live in Westchester County, New York.

5. As a Kid, She Liked Playing Football

According to her imdb bio, Skinner’s hobbies now include literature, classical music, water skiing and baking.

But as a girl growing up in Illinois, she was a “tomboy” who loved to play football in the mud with boys. 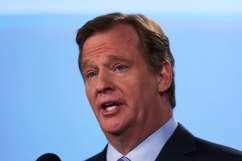