After a dominant first quarter in which the Sooners outscored Tennessee 13-0, the Volunteers were able to hang tough with the No. 4 team in the nation.

However, Tennessee was never able to close the gap in an eventual 34-10 loss.

After the teams traded scores in the second quarter, the Sooners came out of halftime with a touchdown. But Tennessee hit a 31-yard field goal at the end of the quarter to close Oklahoma’s lead.

In the fourth quarter, Tennessee, which trailed 27-10, was about to score a touchdown, but quarterback Justin Worley’s pass was intercepted at the goal line by Julian Wilson, who returned it 100 yards for the night’s final touchdown.

After a 2-0 start to the season, Tennessee has proven it is on the rise. But now the Volunteers travel to face the No. 4 Oklahoma Sooners in Norman in a game in which they are major underdogs.

After a disappointing 5-7 finish last season, the Vols seem to have made significant improvements since last year. But will it be enough to take down one of the best teams in the country?

Tennessee quarterback Justin Worley threw for 273 yards and three touchdowns against Utah State. He kept up the pace against Arkansas State, throwing for 247 yards, two touchdowns and one interception. He’ll have to face Oklahoma, though, without one of his top receivers, Von Pearson.

Meanwhile, when Oklahoma faced Tulsa last week, the Sooner offense put up 319 passing and 261 rushing yards en route to 52-7 win. Sophomore quarterback Trevor Knight threw for 299 yards and two touchdowns and rushed for 35 yards and another score on five carries. The Sooner D shut out Tulsa and allowed only 95 yards in the first half.

Even though Tennessee is a program on the rise, Oklahoma is a different animal and will be able to pull away easily against a young, inexperienced team that is stepping into hostile Norman. 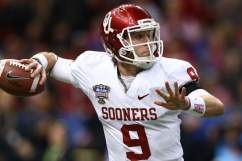