Just before the Wolverines got blown out 35-11 at Spartan Stadium, a plane flew over Spartan Stadium that had a banner that read, “U of M – Keep Brady Hoke – Plzzz.”

The banner was likely a joke from Michigan State fans, but that wasn’t the only joke made about Hoke’s insecure job status. Michigan State students joined in, also trying to convince Michigan to keep its coach.

Even Michigan’s student newspaper got in on the action.

RT if you want us to keep tweeting this game. Favorite if you'd rather we just stop.

Your sentiments have been acknowledged. We'll send you the final score when we have it. pic.twitter.com/XBstm7ShqY

With Saturday’s loss, Michigan drops to 3-5 on this season, including losses to Rutgers and Minnesota. At that, the Wolverines’ recent struggles against Michigan State have hit a point where Michigan can’t even compete on the same field after traditionally beating up their in-state rivals. Some of Michigan’s plays make the team look a middle school team, like the one below.

The Wolverines got into the end zone with 3:40 left in the game, their first trip there against MSU in about 186 minutes of game time — the fourth quarter in 2011, Brady Hoke’s first season as U-M head coach.

At that point though, the party in the stands was already going, and Michigan State’s backups were the only ones on the field.

Before Saturday’s loss, Michigan fans were already calling for Hoke’s job. Aside from the poor start to the season, Hoke came under fire late last month when he played sophomore quarterback Shane Morris after Morris had just suffered a concussion.

Hoke allowed Morris to remain in the game after he sustained a blow to the head that required his teammates to help him remain upright. Hoke denied any knowledge of Morris suffering a potential concussion, and the only injury to Morris that the coach referenced on Sunday was a further aggravated leg injury. 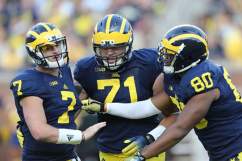 The Michigan Daily, the student newspaper, was one of many media outlets calling for Hoke’s job after the incident.

We watched from the stands, the press box and the replays on TV as he reached for offensive lineman Ben Braden, who held Morris upright for a brief moment. We watched tight end Khalid Hill motion for a hunched Morris to go to the sideline.

We saw running back Justice Hayes signal to the sidelines for medical assistance to come on the field while offensive coordinator Doug Nussmeier called for Morris to get on the ground so his evident injury could be assessed.

And yet Michigan coach Brady Hoke said he didn’t see any of that transpire.

After a loss that will burn deep in the heart of many Michigan fans and alumni, and with their in-state rivals mocking them, the calls for Hoke’s job will likely only get louder. 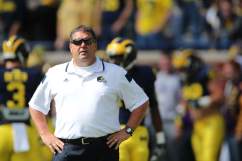