St. Louis Cardinals outfielder Oscar Taveras, a 22-year-old star-in-the-making rated as one of the top prospects in baseball, was killed Sunday in a car accident in his native Dominican Republic.

1. Taveras & His Girlfriend Both Died in the Crash Sunday

According to USA Today, Brian Mejia, Taveras’ agent, told reporters that Taveras and his girlfriend were both killed in the crash.

2. News of Taveraz’s Death Spread During Game 5 of the World Series

Oscar Taveras drives in a run August 30 against the Cubs. (Getty)

Word began to circulate of Taveras’ death just as the Giants and Royals were getting ready to play in Game 5 of the World Series. Fox’s Ken Rosenthal later reported Taveras’ death on the air during the top of the fourth of the game.

We are all stunned and deeply saddened by the tragic loss of one of the youngest members of the Cardinals family. Oscar was an amazing talent with a bright future who was taken from us well before his time. Our thoughts and prayers are with his family and friends tonight.

I simply can’t believe it. I first met Oscar when he was 16 years old and will forever remember him as a wonderful young man who was a gifted athlete with an infectious love for life who lived every day to the fullest.

Condolences poured in from players and rival organizations on Twitter.

Our sincere condolences go out to the family and friends of Oscar Taveras and the @Cardinals organization tonight. #RIP

We are incredibly sad to hear of the passing of Oscar Taveras. Our thoughts and prayers are with his family & the @Cardinals organization.

Our thoughts go out to the family and friends of Oscar Taveras and the @Cardinals organization. Rest in peace.

3. Taveras Was Rated the Top Prospect in the Cardinals’ System

Oscar Taveras celebrates with his teammates October 7 after the Cardinals beat the Dodgers to win the National League Division Series. (Getty)

As Taveras shot through the Cardinals’ system, his stock as one of the best prospect’s in baseball steadily rose. Baseball America, the top authority on prospect rankings, rated him the 24th best prospect in the St. Louis system after the 2010 season, but that ranking increased sharply to No. 3 after the 2011 season and No. 1 after the 2012 and 2013 seasons.

4. Taveras Hit a Pinch-Hit Home Run in the NLCS

Taveras made his Major League debut on May 31 and played in 80 games for the N.L. Central champion Cardinals, hitting .239 with 3 homers, 22 RBIs and a .590 OPS. You can take a look at a detailed statistical breakdown here via Baseball Reference.

He proved valuable enough during the regular season to make St. Louis’ postseason roster, and he came through in the NLCS against the Giants, when he hit a pinch-hit home run in Game 2.

5. It’s Not Clear What Caused the Crash

USA Today’s Bob Nightengale tweeted that Taveras and his girlfriend were driving from Sosua to Puerto Plata when the crash took place. No other details about the crash have been released. 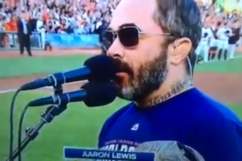