New England quarterback Tom Brady and coach Bill Belichick have had one of the greatest runs ever, as they’ve enjoyed quite a bit of success in their time together so far, winning three Super Bowls, and advancing to two more.

But this season, the Patriots (2-2) have struggled, leaving a lot of talk about Brady’s relationship with his coach. The relationship nearly hit its boiling point last week, when Belichick pulled Brady in the Patriots’ blowout loss at Kansas City.

On Sunday, things get tougher for the Patriots, when they face undefeated Cincinnati (3-0) on Sunday Night Football.

Here’s what you need to know about the pair.

1. Belichick Laughed When Asked if it was time to Evaluate the QB Position

After last week’s 41-14 drubbing at Kansas City, Bill Belichick simply laughed when asked if it was time to re-evaluate Brady and the quarterback position.

While he refused to answer the question, his laugh says it all: that, for the time being, Brady isn’t going anywhere.

2.The Duo Has Set Several Records

Brady and Belichick are considered to be one of the best coach-quarterback duos ever. The pair has set several records, including most career playoff wins (18).

Under Belichick, Brady has also won two Super Bowl MVP awards, two league MVP awards (2007, 2010), has been selected to nine Pro Bowls, and has led the Patriots to more division titles than any other quarterback in NFL history, with eleven.

Brady has thrown for more passing yards than any quarterback in NFL postseason history and is third for career postseason touchdown passes.

3. Belichick Drafted Brady in the Sixth Round in 2000

Brady was selected with pick #199, a compensatory pick, in the sixth round of the 2000 NFL Draft, and is now considered one of the best draft picks ever. According to Michael Holley’s book Patriot Reign, the Patriots were considering Brady and Tim Rattay, both of whom had received positive reviews from then-quarterbacks coach Dick Rehbein.

Brady started the season as the fourth string quarterback, behind starter Drew Bledsoe and backups John Friesz and Michael Bishop; by season’s end, he was number two on the depth chart behind Bledsoe. During his rookie season, he was 1-of-3 passing, for six yards.

ESPN’s Chris Mortensen reported that Brady’s role in the offense has been diminished and he’s not happy about it.

“Several players, coaches and former players have rendered an unsettling picture that all does not look well with Tom Brady and the Patriots and there’s a reason for it,” Mortensen said during Sunday NFL Countdown. “Even though Bill Belichick chuckled when asked Monday night about Brady’s status, others close to the team now believe that when the Patriots used that second-round pick (in 2014) on Jimmy Garropolo that they were, in fact, choosing Brady’s successor, perhaps sooner than later.

“Sources say Brady is uncomfortable with the personnel and coaching changes, the consequences have led to tensions between Brady and the coaching staff, with Brady’s input into gameplans, personnel packages, formations, pre-snap adjustments being significantly diminished.”

5. Their Relationship Was Great During the Preseason

In the preseason, Belichick told reporters, “There’s no other quarterback I’d rather have quarterbacking our team than Tom Brady.”

Brady and Belichick already are the longest-tenured quarterback-coach tandem in NFL history. 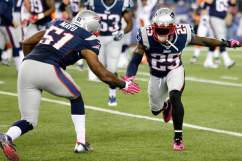