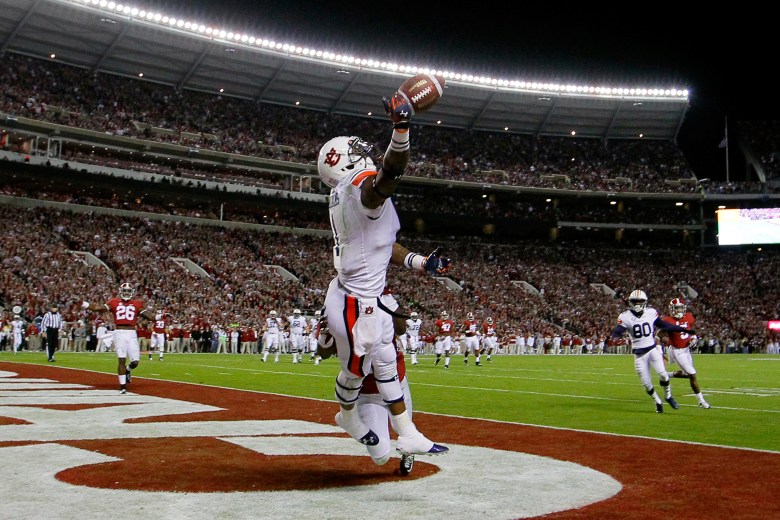 For a few moments in Saturday night’s game against Auburn, it appeared Alabama coach Nick Saban was going to bench quarterback Blake Sims after the fifth-year senior threw his third interception early in the 3rd quarter.

Saban stuck with Sims. Then Sims stuck it to the Tigers.

The Crimson Tide had already advanced to the SEC Championship Game by virtue of Mississippi State’s loss to Ole Miss in the Egg Bowl earlier in the day. But the come-from-behind win kept Alabama from likely dropping out of the College Football Playoff top four ranking.

Get the final box score and stats here. 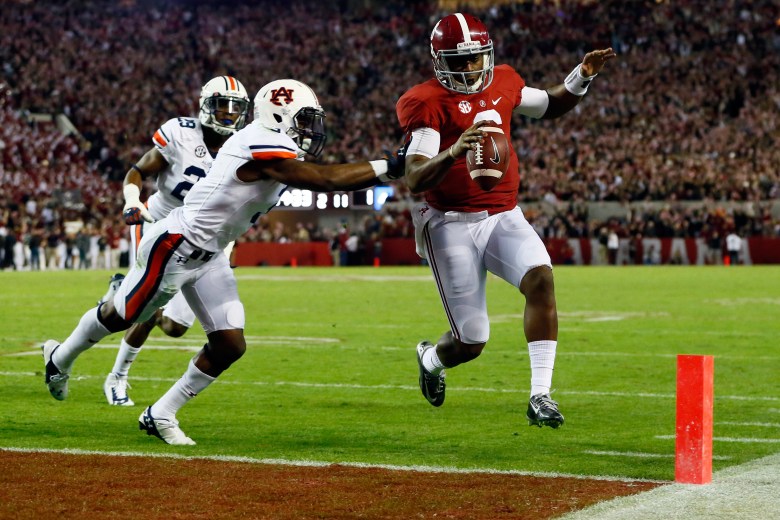 On Alabama’s first play of the second half, quarterback Blake Sims threw his third interception of the game, prompting head coach Nick Saban to warm up backup quarterback Jake Coker.

Auburn capitalized on that interception when Nick Marshall hit Quan Bray for a 5-yard touchdown score to give Auburn a 33-21 lead.

Saban kept Sims in the game and the fifth-year senior responded. On the ensuing drive, Sims hit his favorite target, Amari Cooper, for a 39-yard touchdown, the duo’s second scoring connection of the day. That cut the lead to 33-27 after the Tide failed on a 2-point attempt. Cooper caught a 17-yard TD from Sims in the 1st quarter to give Alabama a 14-3 lead.

Daniel Carlson’s fifth field goal of the game, a 33-yarder, gave Auburn a 36-27 lead, but Sims and Cooper got right back it, connecting on a 75-yard score on the first play of Alabama’s drive to cut the lead to 36-34.

Then Sims and the Alabama offense took over. First Sims scored on an 11-yard run, then he connected with DeAndrew White on a 6-yard scoring pass and finally Derrick Henry ran a touchdown in from 25 yards out to give the Crimson Tide a 55-36 lead. You can see all the scoring plays below.

Auburn added a late touchdown on a 5-yard Corey Grant run and a 2-point conversion to close out the game’s scoring and make the final 55-44.

Heisman Trophy candidate Amari Cooper only helped his cause Saturday night, tying his own school-record with 224 receiving yards, while catching 13 passes and 3 touchdowns from quarterback Blake Sims. Sims, who threw 3 interceptions, completed 20 of 27 passes for 312 yards and 4 touchdowns and added an 11-yard running score.

Derrick Henry did almost all of his damage on a late 4th quarter drive. First he busted through the line for a 49-yard run, then followed it up with his 25-yard TD scamper. He finished with 72 yards on just 5 carries.

The 99 combined points set the mark for the highest-scoring Iron Bowl in the 79 meetings of the series. The previous high was in 1969, when Auburn won 49-26 (75 total points).

Gus Malzahn’s Tigers moved the ball at will for most of the game against one of the nation’s top defenses, but had to settle for field goals early in the game when Alabama took a 14-6 lead in the 1st quarter.

Quarterback Nick Marshall threw for 456 yards and 3 touchdowns on 27 of 43 passing. He threw 1 interception and also rushed for 49 yards.

Receiver Duke Williams returned to the lineup after missing the past 2 games with a knee injury to catch 7 passes for 121 yards.

Auburn’s leading rusher Cameron Artis-Payne had 77 yards on 25 carries. He was held out of the end zone after scoring at least 1 touchdown in each of his previous 5 games.

Alabama Moved On To Face Missouri in The SEC Championship Game

By the time Alabama and Auburn kicked off Saturday night, it was already known the Crimson Tide was heading to Atlanta for the SEC Championship Game. When Ole Miss knocked off Mississippi State 31-17 in the Egg Bowl earlier in the day, Alabama clinched the SEC West title.

The Crimson Tide will face East winner Missouri (10-2, 7-1 SEC) next Saturday, Dec. 6, at the Georgia Dome. The game is scheduled for 4 p.m. Eastern and can be seen on CBS.

Preview: No. 1 Alabama Hosts Auburn in The 79th Iron Bowl

Alabama is ranked No. 1 in the nation and a win in Saturday night’s 79th Iron Bowl will clinch the SEC West title for the Crimson Tide. It’s the same scenario as last season when they faced Auburn.

In 2013, though, Auburn stunned top-ranked Alabama, halting the Tide’s National Championship aspirations. The Tigers won the SEC West and trounced Missouri in the conference championship, advancing to the BCS title game, where they fell to Florida State.

No doubt Nick Saban and Co. haven’t forgotten what happened a year ago in Auburn. This year’s matchup is in Tuscaloosa, where the Crimson Tide (10-1, 6-1 SEC) have won 15 straight, tied with Baylor for the longest current streak in the Football Bowl Subdivision.

The Tigers (8-3, 4-3 SEC) have dropped two of three, but would love to play spoiler once again to their heated rival.

If Alabama wins, it locks up the West title and a trip to Atlanta to play Missouri in the SEC Championship Game next Saturday, Dec. 6. The contest is scheduled for 4 p.m. Eastern and can be seen on CBS.