Carson Palmer is the one in the Palmer household making headlines after leading the Arizona Cardinals to an NFL-best 7-1 start and parlaying the 2014 season he had into a $50 million contract extension.

But Palmer isn’t the only member of the household to have been a prominent athlete at USC, where Palmer led the Trojans to two national championships under Pete Carroll. (One of the titles was split with LSU.)

Palmer’s wife, the former Shaelyn Palmer, was the starting goalkeeper on the Trojans’ women’s soccer team, and it was their status as athletes that initially brought them together.

Here’s what you need to know about Shaelyn and her marriage to the Cardinals’ signal-caller:

1. Shaelyn & Carson Met When They Were Freshmen at USC 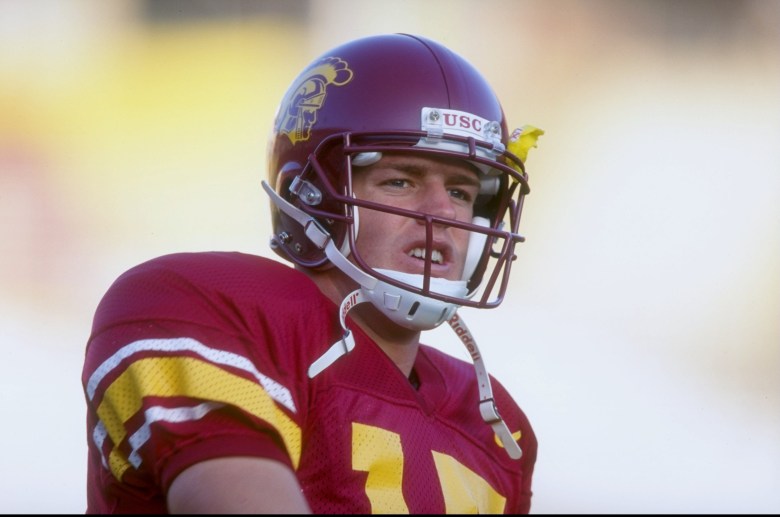 Shaelyn and Carson, both now 34, met in the fall of 1998 at a freshmen orientation session at USC, and have been an item ever since.

Shaelyn told the Cincinnati Enquirer’s Mark Curnutte in 2003 that while she and Palmer had their share of fun during their years in LA, it wasn’t always easy to get him out of the house.

Palmer’s life has changed since he won the Heisman Trophy as college football’s top player on Dec. 14. But he hasn’t changed, says Fernandes, a former goaltender on the Southern California women’s soccer team who met Palmer at freshman orientation.

“He could sit on the couch for 24 hours and play video games,” she says.

She got him out of town at least once. They went together to San Diego for the Super Bowl in January, but the game was not the highlight of the trip for Palmer.

“He was most excited when he got to meet (rap star) Snoop Doggy Dog,” she says. “Carson was so excited when he found out Snoop had worn his (No. 3 Southern Cal) jersey and wanted to meet him.”

2. Shaelyn Was the Starting Goalkeeper on the USC Soccer Team

Shaelyn wasn’t a Heisman Trophy winner at USC like her husband, but she was no slouch. The San Jose native was a four-year latter-winner for the Trojans who served as either the Trojans’ full-time or part-time starting goalkeper in three of those seasons.

She came to USC after a dominant career at San Jose’s Presentation High School. Here’s a rundown of some of her high school accomplishments via her bio on the USC athletics website:

Fernandes started in goal for four years at Presentation High in San Jose, Calif., and led the school to an amazing 78-4-5 record, four league titles and two CIF Central Coast Section championships…set a school record with 55 shutouts…made the All-CIF Central Coast Section first team as a senior and junior and was the Central Coast Section’s Most Valuable Goalkeeper as a senior…also on the All-Blossom Valley Athletic League first team as a junior and senior and was the BVAL’s Most Valuable Goalkeeper as a sophomore, junior and senior…during her junior season, Presentation went on a trip to Japan, where they played Japanese high school and club teams and posted a record of 7-0-1…member of the honor roll at Presentation all four years…her club team, the Central Valley Mercury, won three straight national championships and five straight regional titles…also played on state and regional ODP teams and made the Under-16 national pool.

3. Carson Popped the Question While the 2 Were Still at USC 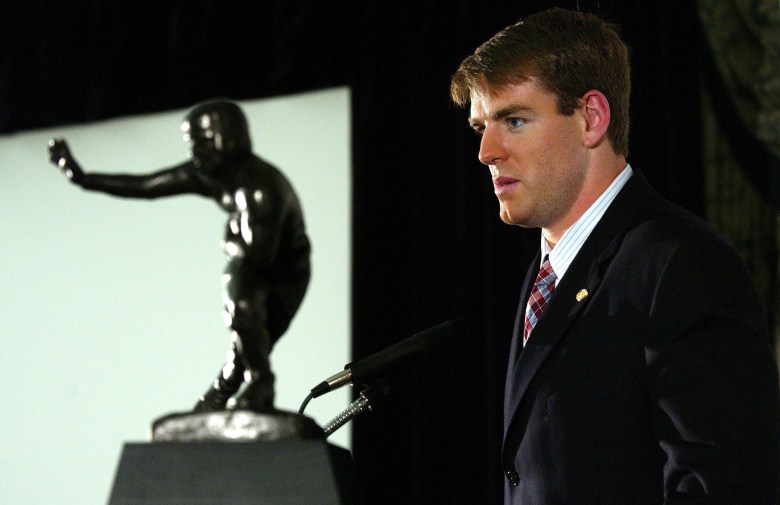 Carson’s senior year at USC included winning the Heisman Trophy (above) and getting engaged to Shaelyn Fernandes. (Getty)

According to a 2003 profile in the Los Angeles Times, Carson proposed to Shaeylyn when the two were still students at USC and Palmer was in the middle of a chaotic season complete with constant visits from NFL scouts and chatter about his NFL future.

The proposal came at an outdoor table at a cliff-top restaurant at LA’s Dana Point.

Here’s how the Times’ Diane Pucin described the proposal:

He was frazzled and running late, and it was in the middle of his most fabulous season, but Palmer, from Laguna Niguel, never lost his poise, never varied from his plan. That is the Palmer method. Never panic, never complain.

“I couldn’t figure it out,” Fernandes, a former USC soccer goalie, said. “We were running late and I told Carson, ‘Just call the restaurant and say we’ll be late.’ But Carson wouldn’t do it.

“When we got to the restaurant, I understood. We were taken outside to this single table overlooking the ocean. We had our own waiter and violin player. Everything was ready. When dessert came, it was under a cover and the waiter took the cover off and there was the [engagement] ring.

4. Shaelyn & Carson Got Married Shortly After the Bengals Drafted Carson 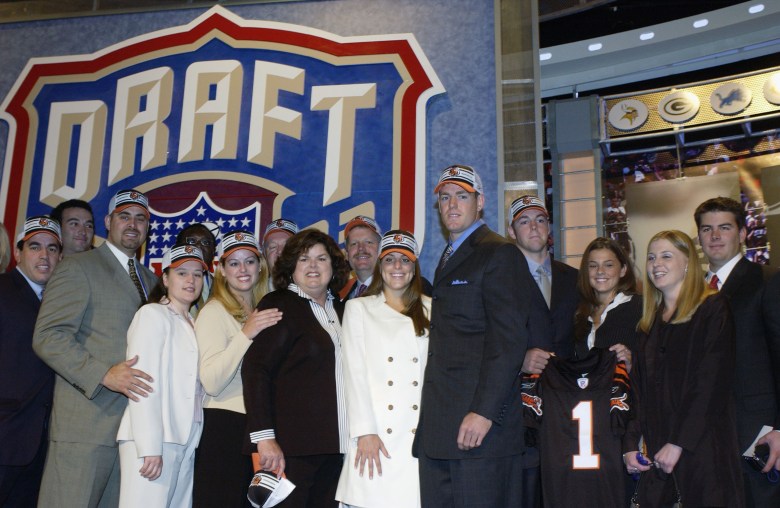 Shaeylyn, then Palmer’s fiancee, was among a bevy of Palmer supporters on hand at the 2003 NFL Draft, when the Cincinnati Bengals drafted Palmer with the No. 1 overall pick. The two got married on July 5, 2003 in Pebble Beach, California.

Carson’s younger brother Jordan, who played quarterback at the University of Texas at El Paso, was the best man. 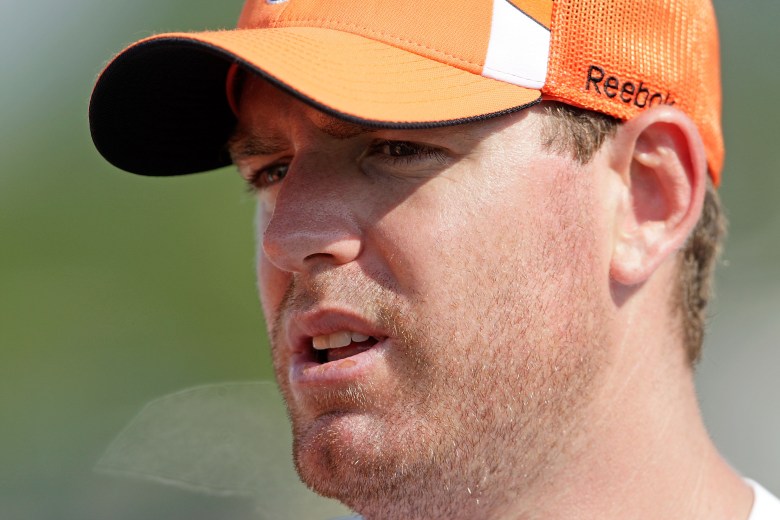 Carson Palmer as a new dad in 2009 with the Bengals. (Getty)

Shaelyn gave birth to twins — a boy named Fletch and a daughter named Elle — in 2009.

Carson talked about the experience of being a new dad in March of 2009, when the twins were about two years old, with the Bengals’ website.

“One minute you’re so exhausted and then the next minute something happens that makes you laugh or smile,” he told the site. “By 4 o’clock my son poops for the third time in the day. I can’t do that.” 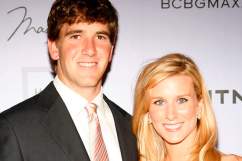 Read More
5 Fast Facts, Football, NFL, WAGs
Carson Palmer isn't the only member of the Palmer household to have been an athlete at USC. His wife, Shaelyn, was the goalie on the Trojans' soccer team.