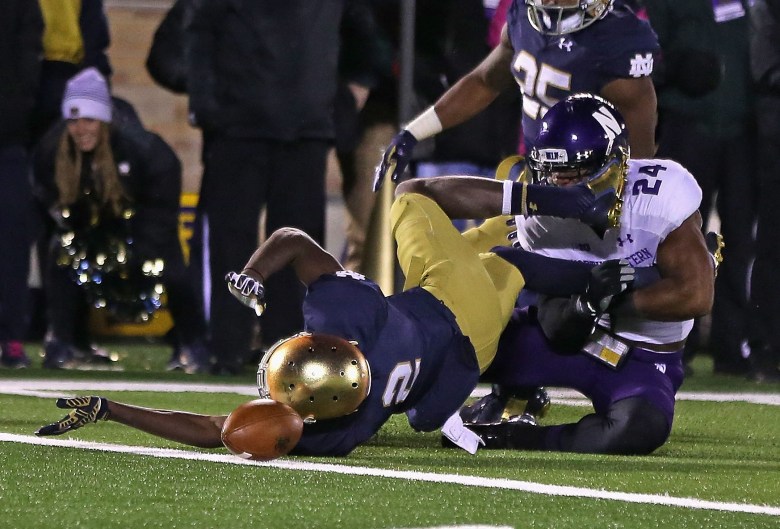 Notre Dame’s seniors have helped rebuild the program into a national contender under coach Brian Kelly. But the group’s last game at Notre Dame Stadium ended in disappointment Saturday in a 31-28 loss to 24th-ranked Louisville.

The Cardinals (8-3 overall, 5-3 ACC) handed the Irish (7-4) their fourth loss in five games after a 6-0 start that put Notre Dame in the national championship picture.

Notre Dame was tantalizingly close to digging out of an 11-point deficit and tying the game with 51 seconds left, but Kyle Brindza’s field goal attempt from 32 yards out was wide right.

Brindza was victimized in part by a bad hold by Malik Zaire, who was slow getting the ball to the ground on the attempt — the continuation of a trend of holding problems that have plagued the Irish throughout the year.

The miss was a rough ending to the last home game for Brindza, a senior who’s the leading kicker in Notre Dame history.

DeVante Parker's 30th career touchdown reception puts the Cardinals back on top 24-20 with 5:46 left in the 3rd @CoachPetrinoUL

Notre Dame took its first lead of the game when Everett Golson hit Corey Robinson on a 7-yard touchdown strike that made it 20-17 Irish with 9:20 left in the third quarter.

Louisville answered, though, when Reggie Bonafon hit DeVante Parker on a 21-yard touchdown strike that made it 24-20 Cardinals with 5:46 left in the quarter.

The Cardinals padded their lead on the first play of the fourth quarter when Brandon Radcliff scored from 15 yards out to make it 31-20 with 14:55 left in the game.

Golson’s 28-yard touchdown pass to William Fuller brought ND to within 6, and Golson took it himself on a successful 2-point conversion that made it 31-28 with 11:17 left.

Coming off a disastrous loss last week against lowly Northwestern, Notre Dame is back in action Saturday afternoon against 24th-ranked Louisville.

The game is the last of four this year against ACC opponents — part of the deal the Irish signed with the league when the school joined as a member in all non-football sports.

The Irish (7-3) are a 3-point favorite over the Cardinals (7-3 overall, 5-3 ACC). Kickoff is set for 3:30 p.m. Eastern, with TV coverage on NBC. Keep it here for live updates and highlights throughout the game. 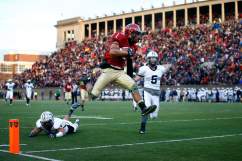