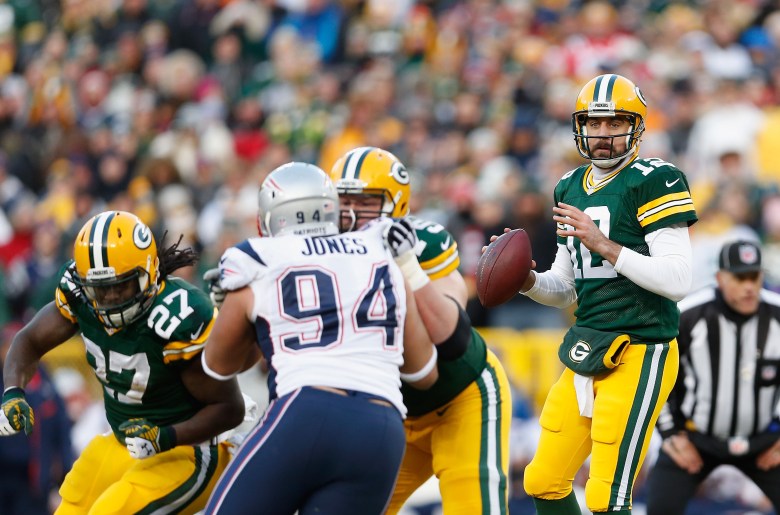 If Sunday’s Packers-Patriots game was in fact a preview of the Super Bowl, we’re in for a heck of a Super Bowl.

In a battle of the two hottest teams — and perhaps the two best teams — in the league, Green Bay held off New England 26-21 at Lambeau Field, snapping New England’s seven-game winning streak.

The Green Bay defense held what had been a red-hot Patriots offense to 320 total yards and just 84 rushing yards — a stark contrast to the way New England had been running the ball at will over the past month.

The Packers (9-3) did it in part by keeping Brady and Co.(9-3) off the field by holding a time-of-possession advantage of more than 13 minutes.

Tom Brady Hit Brandon LaFell to Cut the Lead to 2, but That Was as Close as the Pats Got

New England went for it on 4th-and-3 at its own 49 on its ensuing drive, and Tom Brady delivered, hitting Julian Edelman for a first down to keep the drive alive.

The Pats nearly took the lead when Brady heaved it into the endzone for Rob Gronkowski and Gronkowski almost came up with a diving catch before the ball popped loose.

Green Bay’s defense got a huge sack on 3rd-and-9, forcing the Patriots to settled for a 47-yard field goal attempt by Stephen Gostkowski that sailed wide right, giving the Packers the ball with the lead intact with 2:40 left.

New England had a chance to force a turnover on downs and get the ball back one more time, but Aaron Rodgers hit Randall Cobb for a first down that sealed it with just over 2 minutes left, allowing Rodgers to take a series of knees to run out the clock.

The Patriots have gotten rushing touchdowns from three running backs over the past three weeks. First it was Jonas Gray, who ran wild over the Colts for 4 touchdowns. Then it was LeGarrette Blount, who had 2 against the Lions in his return to the team.

Sunday, it was Brandon Bolden, who zig-zagged his way into the endzone from 6 yards out with 12:59 left in the first half for his first touchdown of the season, bringing New England within 6 at 13-7.

After a Mason Crosby field goal made it 16-7 Green Bay, Tom Brady’s 2-yard touchdown pass to Brandon LaFell brought the Pats to within 2 at 16-14 with 1:09 left in the first half.

Green Bay answered and stretched the lead to 23-14 with 23 seconds left in the first half on a 45-yard touchdown pass from Aaron Rodgers to Jordy Nelson, who blew past Darrelle Revis.

The Packers extended their lead to 13-0 on their last play of the third quarter when Aaron Rodgers hit Richard Rodgers for a 32-yard touchdown strike.

Aaron Rodgers set the play up with a pump fake, then hit Rodgers near the goal line, capping a 4-play, 85-yard drive with 8 seconds left. 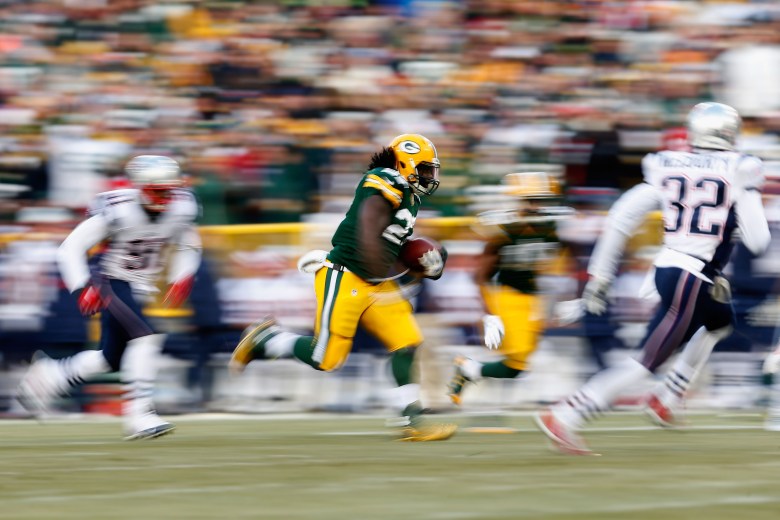 The Packers got on the board on their opening drive with a 32-yard field goal by Mason Crosby with 11:14 left in the first quarter.

The field goal was made possible by the work of Eddie Lacy, who carried the ball four times for 39 yards before the drive stalled out at the New England 14.

After Lacy gets them going, the #Packers' nine-play, 58-yard drive stalls and they settle for a 32-yard Crosby FG. 3-0 Green Bay.

Green Bay settled for another Crosby field goal with 3:27 left in the quarter after an 11-play, 66-yard drive stalled out at the Patriots 17. 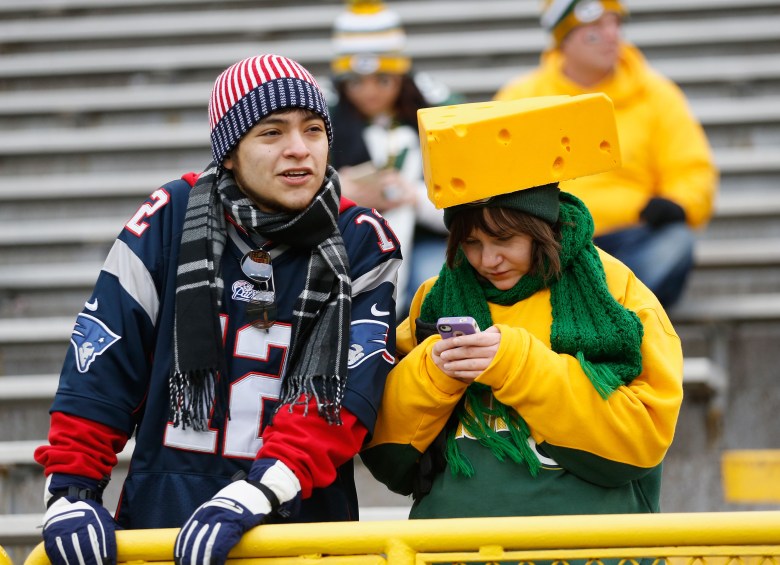 A Patriots fan and a cheesehead hang out before the game at Lambeau Field. (Getty)

The Packers are undefeated at home. The Patriots have won seven straight, four of them against division leaders.

The teams are first and second in the league in scoring, with no defenses coming close over the past month to slowing down Aaron Rodgers or Tom Brady.

Something’s gotta give when the two teams meet Sunday afternoon in what many are billing as a potential Super Bowl preview.

Kickoff is set for 4:25 p.m. Eastern at Lambeau Field, with TV coverage on CBS. Keep it here for live updates once the game starts and stick around for a full recap afterward.

It’s the first meeting between the teams since 2010 and the first between Rodgers and Brady as starters. (Rodgers missed the 2010 game with a concussion, and Matt Flynn started in his place.)

Here’s a look at the teams’ offensive statistical leaders, with Brady and Rodgers leading the way.

Tomorrow will be the 1st meeting between Rodgers & Brady as starters. @StateFarm infographic: http://t.co/nZDEPzY0ht pic.twitter.com/pnOqsBrp6J

Tom Brady and Aaron Rodgers have both been here before, atop the race to be named the NFL’s Most Valuable Player, while quarterbacking their teams into Super Bowl contention. But they’ve never been here together.

In one of the more that-can’t-really-be-true stats of this NFL season, Brady and Rodgers, three MVP awards and four Super Bowl rings between them, have never even played each other.

It’s going to be a great match-up, but at the crux of it is these two guys. I have to imagine that in big games, like they normally do, they’ll both play huge. When it comes down to the MVP race, especially these last five games of the year, a big part of it is how do their teams finish? What everyone will remember is what you did at the end. Who makes his mark in a game like this, when they are going head-to-head — does one of these guys shine

The temperature is expected to be 25 degrees at kickoff before falling into the teens later in the game. But skies are expected to be clear, and thanks to an army of shovelers, the stands at Lambeau are free of snow. 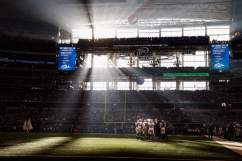