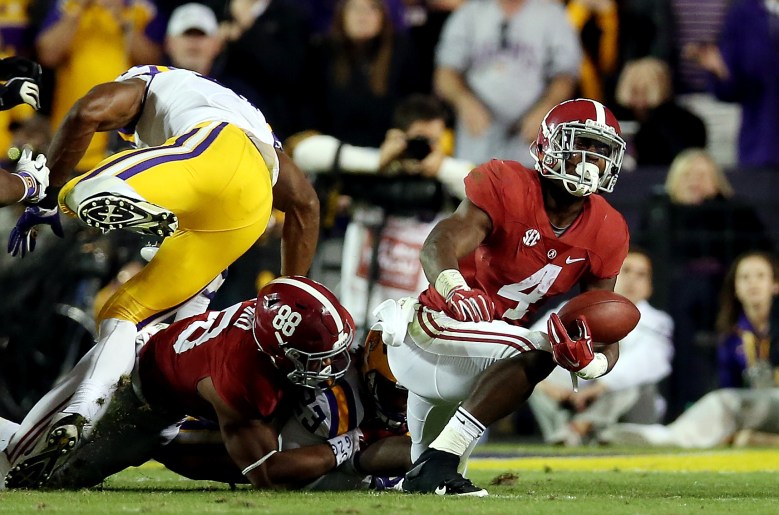 Alabama running back TJ Yeldon is expected to play Saturday against top-ranked Mississippi State after injuring his ankle last week vs. LSU. (Getty)

In one play late in last Saturday’s game against LSU, it looked as if Alabama’s hope for another National Championship season was effectively over. Tied at 10 with a little over a minute left and deep in its own territory, Tide running back TJ Yeldon fumbled the ball away. Yeldon hobbled off the field. Then LSU kicked the go-ahead field goal with 50 seconds remaining. LSU 13, Alabama 10.

Well, by now we all know what happened next. Mistakes were made, passes were completed, stars aligned and Alabama pulled off the improbable 20-13 win in overtime. Title hopes are still alive in Tuscaloosa.

As for that running back who limped off the field in Death Valley? He’s also alive. Turns out Yeldon is dealing with a minor sprained ankle and is expected to play Saturday when fifth-ranked Alabama hosts No. 1 Mississippi State. The game can be seen on CBS at 3:30 p.m. Eastern.

Here’s what you need to know about Yeldon and the injury:

1. It Could Have Been Worse

When I said it could have been worse, I was talking about Yeldon’s injury, not the above grainy YouTube clip. The junior running back limped off the field, into the locker room and didn’t return to the game. The severity of the injury was unknown at the time. But according to Crimson Tide head coach Nick Saban, Yeldon practiced most of the week and is expected to play Saturday.

At 6-foot-2 and 221 pounds, Yeldon has been a durable back for Alabama. He has missed only 1 game in his career, last season’s victory over Chattanooga.

Yeldon was replaced in the LSU game by Derrick Henry, a sophomore. 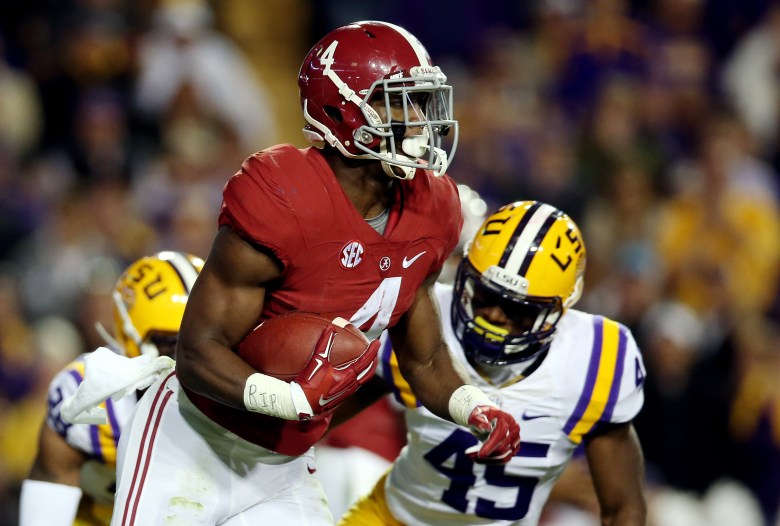 Yeldon is 6th all-time in career rushing yards at Alabama with 3,029. (Getty)

I mentioned earlier Yeldon has been durable in his career. Staying on the field has helped him produce 1,000-yard seasons in both his freshman and sophomore campaigns, the first player in school history to accomplish that feat. Yeldon joined Johnny Musso (1970-71), Bobby Humphrey (1986-87), Shaun Alexander (1998-99) and Kenneth Darby (2004-05) as the only backs in Tide history to have two 1,000-yard seasons.

With 686 yards and 5 touchdowns on 135 carries, Yeldon needs a few more big games to eclipse the century mark again. An ankle injury wouldn’t help that cause.

Yeldon has 3,029 rushing yards and 31 rushing touchdowns, both 6th on the school’s career list. 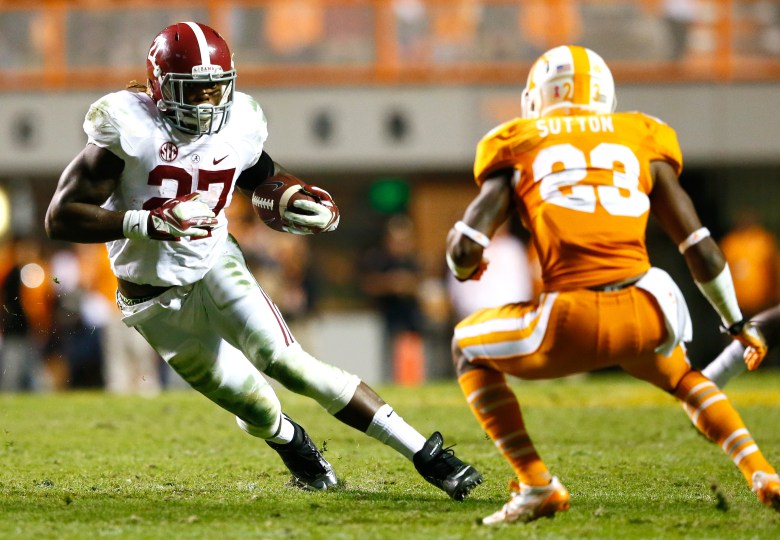 Derrick Henry probably isn’t a household name to the casual college football fan, but he’s quietly put up solid numbers as Yeldon’s backup. Henry’s carried the ball 111 for 554 yards (5.0 average) and 3 touchdowns. He has 2 100 -yards games on the season (113 vs. West Virginia and 111 vs. Florida) and double-digit carries in 6 games. As a freshman a season ago, he carried the ball 35 times for 382 yards, an average of 10.9 per tote.

To say Henry had a decorated high school career at Yulee (Fla.) High would be an understatement. He entered Alabama as high school football’s all-time leading rusher with 12,124 career yards. As a senior in 2012, Henry rushed for 4,261 yards, which allowed him to pass Ken Hall’s 51-year-old career high school mark.

Here are nearly 9 minutes of highlights from Henry’s senior season in high school:

And at 6-3, 241 pounds with excellent athletic ability, Henry poses problems for opposing defenses. 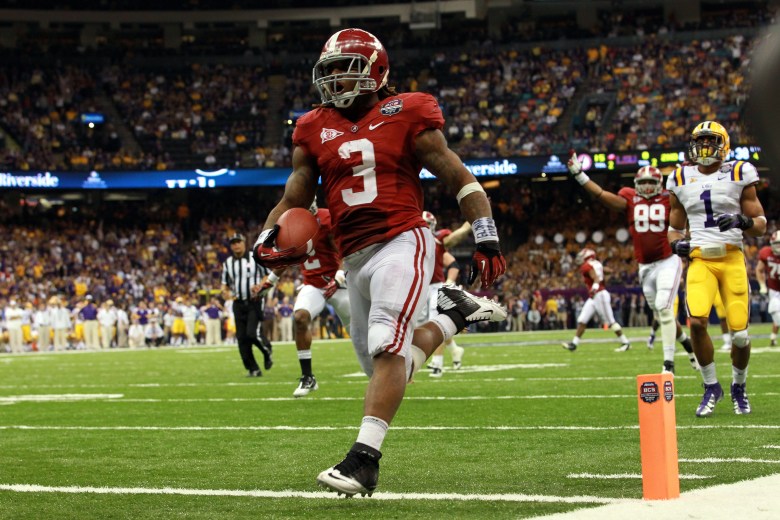 Trent Richardson was a former star running back at Alabama from 2009-11. (Getty)

Since Saban’s arrival in Tuscaloosa, he has always preferred to use multiple ball carriers. While there has always been a distinct line between starter and backup, both received plenty of touches. Starter Kenneth Darby had backup Glen Coffee. Coffee had Mark Ingram. Ingram had Trent Richardson. Richardson had Eddie Lacy. Lacy had Yeldon. And now Yeldon has Henry. In Saban’s offense, it’s pay your dues and produce as the backup, then become the starter.

So whether Yeldon is 100 percent for Saturday or not, expect Henry to get his touches. And, of course, if Yeldon is not as healthy as Saban declares, Henry will garner even more carries. 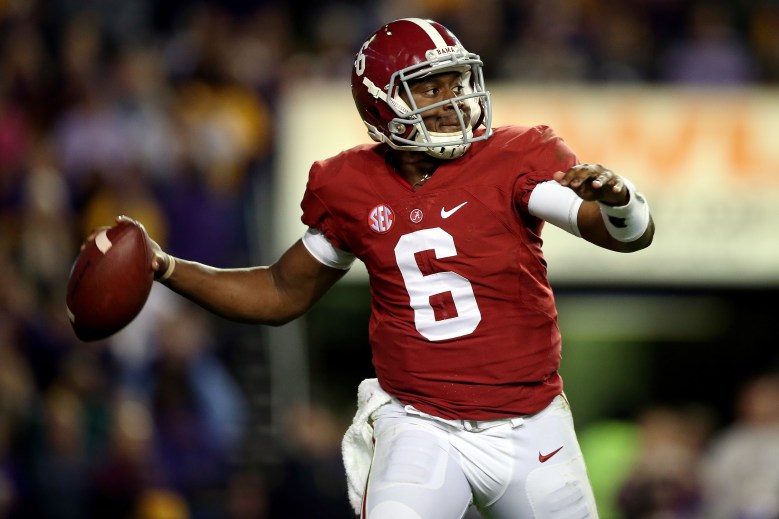 Mississippi State might be the No. 1 team where it matters, in the nation’s rankings, but its defense is 121st out 124 Football Bowl Subdivision teams in passing yards allowed. The Bulldogs allow opposing quarterbacks only a 52.3 completion percentage, but they give up 300 yards through the air per game. That means Miss State gives up a lot of big passing plays, which could mean an Alabama game plan geared toward quarterback Blake Sims and wide receiver Amari Cooper.

The Bulldogs have a top 20 rush defense, so regardless of whether Yeldon’s ankle holds up or not, it could be tough sledding on the ground for the Tide.