The U.S. Men’s National Team dropped it’s second game in five days losing to the Republic of Ireland 4-1.  Robbie Brady netted two for the Irish who scored three in the second half to finish off the American side.

With the loss the U.S. team drops to 1-2-2 following the World Cup without a single win in their last four matches.  Coincidentally the United States also allowed a goal beyond the 85th minute for the fourth straight game giving Ireland a thoroughly convincing victory over the red, white and blue.

The Offensive struggles for the U.S. continue as the United States controlled the flow of the game for much of the first half before conceding three straight goals in the 2nd.

Although the U.S. had some good chances to level the score, including an Altidore shot that hit the crossbar, Ireland eventually pulled away, finishing off the U.S. by scoring two goals past the 80th minute.

Despite the best efforts of defensive midfield Kyle Beckerman, the U.S. squad struggled with turnovers for the second straight game.  On the first goal, Bedoya made a mistake that led to an Irish break essentially leaving the American defense and keeper out to dry.  Similarly, another goal came after a failure to clear the ball by Fabian Johnson.

The final goal came on a foul right outside the penalty area that gave Ireland a good spot from which to bury the free kick.  As with the game against Columbia the U.S. lost the ball at inopportune times and wasn’t able to generate enough truly dangerous chances to keep Ireland on edge.

While the American’s kept possession much better than they had against Columbia on Friday, the linking play between the forwards and midfield were still no where to be found especially in the 2nd half when Ireland started to pull away.

The game will be one to forget for Klinsmann and his staff as they try to prepare for the 2015 international year.

Robbie Brady Scores his 2nd of Match Off Free Kick

Ireland adds another to their lead bringing the score to 4-1 with only 4 minutes remaining.

James McClean Adds Another for Ireland

After a series of defensive miscues the ball squirts out to McClean who buries it from 25-yards out giving Ireland a 3-1 lead.

Off a pass from keeper Bill Hamid, Wood splits through the defense missing the goal by only inches.

After Fabian Johnson gives the ball away in his own end, Brady finishes to give the Irish a 2-1 lead.

Following the goal from Diskerud, Altidore nearly adds a second as his shot hits the crossbar.

In the 38th minute Mix Diskerud knocks in a cross to level the score at 1.

Bill Hamid Comes Up With Big Save

In the 22nd minute off an Alejandro Bedoya corner, outside back Fabian Johnson hits the post off a shot from outside the box.

The biggest surprise of the U.S. line-up is Bill Hamid starting in goal.  While Klinsmann has shown a tendency to switch keepers between friendlies it’s a little surprising to see Hamid over Nick Rimando, however this likely has more to do with getting Hamid some experience rather than anything to do with Rimando.

The only other surprise of the line-up is Wondolowski starting up top where Rubio Rubin played so well against Columbia.  Wondolowski is a hard worker and has proven he can score against lesser teams but it’s still interesting given that we essentially know by now what Wondolowski brings to the table.

Preview: U.S. to take on Republic of Ireland in International Friendly

The United States men’s soccer team will take the field today against Ireland looking to end their 2014 campaign on a high note, and we’ll have live updates throughout the game in this post.

Thus far the United States has experienced a roller coaster ride of a year, finishing 6-4-4 through all games including the World Cup, in which they went 1-2-1 and advanced to the knockout round.

Yet while the American side hasn’t exactly looked great at any point this year, head coach Jurgen Klinsmann and his staff will be looking for more consistency as 2014 comes to a close and the new year begins.

With a win against the 61st ranked Republic of Ireland, the United States can earn itself some confidence ahead of next year’s Copa America, where they’ll square off against teams such as Brazil, Chile, and Argentina.

For this reason, expect Klinsmann to push hard for a win while also testing out some of his new, young guys like Rubio Rubin and Greg Garza as he begins to assemble his roster moving forward.

A shutout for the U.S. would also move goalkeeper Brad Guzan into a two-way tie for fifth place in all-time shutouts with 10.

The game can be seen on ESPN2 with coverage starting at 2:30 p.m. Eastern. Click here for information on how to watch. Ian Darke and Taylor Twellman will cover the game with Darke handling play-by-play and Twellman working as analyst. 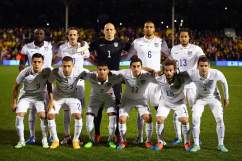 Read More
Breaking News, Soccer
Check here for all the scores and highlights as the U.S. Men's Soccer team takes on Ireland in international play.