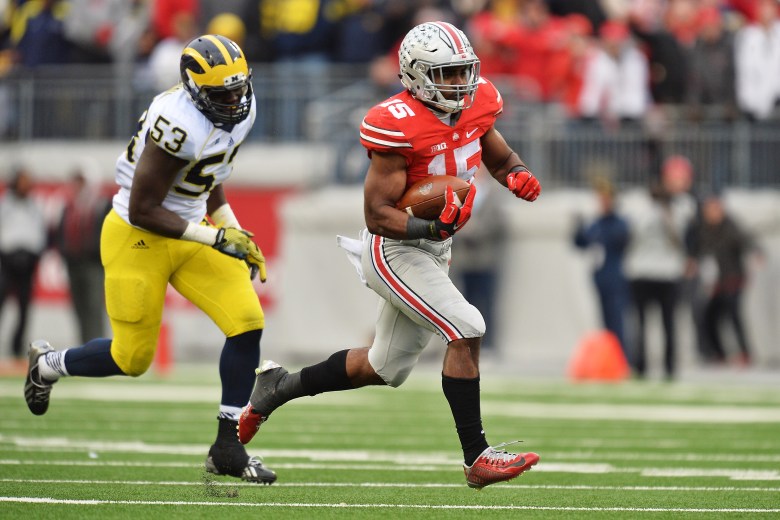 Ezekiel Elliott has run for 1,402 yards and 12 scores for Ohio State. (Getty)

An Alabama-Ohio State game just feels like it is supposed to be part of the first-ever College Football Playoff, doesn’t it?

Alabama’s only blemish came at Ole Miss, then ranked No. 11, nearly 3 months ago. OSU’s slip up was 4 months ago vs. Virginia Tech.

Since then, it’s been nothing but Ws.

Though in Columbus, there’s a new guy under center. When J.T. Barrett broke his ankle in the regular season finale, an untested sophomore named Cardale Jones became the new starting quarterback. All Jones did was lead OSU to a 59-0 win over Wisconsin in his 1st career start.

Alabama comes in rolling with a stifling defense and a balanced offensive attack led by senior QB Blake Sims.

Taking a break from the norm of a running back being the focus of the offense, Alabama turned to Heisman finalist wide receiver Amari Cooper and quarterback Blake Sims to move the chains. They responded in a record way. Cooper shattered nearly every receiving record with a 115-1,656-14 TD line and Sims used his arms and legs (26 TD passes, 6 rushing) to keep opposing defenses guessing. And give a lot of the credit to offensive coordinator Lane Kiffin for finding creative ways to get Cooper the ball. Expect more the same Thursday from Kiffin.

For the first time in what seems like forever, Nick Saban didn’t have a 1,000-yard rusher. T.J. Yeldon ran for 932 yards and 10 touchdowns and wrecking ball Derrick Henry added 895 and 10 more scores.

The offensive line wasn’t always dominant, but ceded just 10 sacks of Sims. They’ll need to be ready for All-America DE Joey Bosa and his 13.5 sacks.

It all starts with the front 7 and their nation-leading run defense. Linebackers Reggie Ragland (88 total tackles) and Trey DePriest (82 total) are sure tacklers. The Tide doesn’t pile up the sacks (29 on the season), but they can get pressure and that’ll be key against young Buckeyes QB Cardale Jones.

There are opportunities for big pass plays vs. the Alabama secondary as All-American Landon Collins (team-leading 91 tackles and 3 interceptions) and Nick Perry sometimes are a little too aggressive in run support. But overall the secondary is solid.

Freshman JK Scott led the SEC with a 47.0 punting average. Saban likes to play musical kickers, though, as Adam Griffith and Gunnar Raborn have combined to make just 14 of 22 field goals.

Obviously the focus is going to be on Cardale Jones, he of the whole 34 pass attempts on the year. He looked like 5th-year senior in the Big Ten Championship Game against Wisconsin, but Alabama is a different animal. Either way, Jones will look to lean on Ezekiel Elliot, who seemingly made a big run every game en route to 1,402 yards and 12 TDs.

Big-play receiving threat Devin Smith (26.6 average, 11 TDs) should be ready for some deep chances as Alabama has shown the propensity to get beat at times.

The offensive line allowed 24 sacks and paved the way for the 10th-best rushing attack in the FBS.

As mentioned above, Bosa is the Buckeyes’ best defensive player and has shown the ability to both rush the passer and play the run effectively. LB Joshua Perry leads the team with 113 tackles (67 solo).

The secondary, led by Vonn Bell and Doran Grant, will have their hands full with Cooper. But both are ball-hawks who picked off 5 passes apiece.

Cameron Johnston also is a plus on special teams, averaging 45.1 yards per punt, including 13 of 50+. Like the Tide, kicking isn’t the Buckeyes’ fortay – they have made just 11 of 18 FGs.

As if Bourbon Street needed another reason to continue the party, New Orleans brings you Alabama-Ohio State on the first day of the New Year in the first-ever college playoffs. I would not want to be a French Quarter street sweeper this week.

You gotta love Saban-Meyer matchups. The two had some memorable ones when Meyer had Tim Tebow in Florida. Expect another Thursday.

All eyes will be on Jones and how he handles his offense and reacts to the Tide’s suffocating defense. While Jones looked great in his only start, you have to give the advantage to Saban, defensive coordinator Kirby Smart and Alabama here. Jones will hit a big pass or 2 and make something happen with his legs, but don’t expect Elliott to find many running lanes against UA’a No. 1-ranked run D.

Sims and Co. have faced some stingy defenses over course of the season and the Buckeyes’ unit is right up there. The Tide O-line kept Sims upright, but will have their hands full with Bosa (wouldn’t that be holding, though?). And Sims needs to be aware of the ball-hawking Bell and Grant. Kiffin will put his dynamic duo in position to make some plays, they just need to execute. Don’t be surprised if No. 2 receiver DeAndrew White comes up with a productive game.

While I talked about Alabama not having a 1,000-yard rusher, the Tide is a punishing running team. Yeldon and the emerging Henry will get their yards. And when Alabama has a lead, it keeps it, because Yeldon and Henry can close.

They’re not going to close down Bourbon, but they’ll close out the Buckeyes’ season. 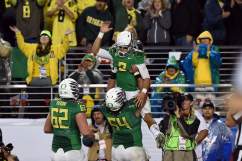