Heavy’s prediction was a little more tame than how this game went. What looked like a Cowboys blowout, ended up much closer in the end, but the game was never in doubt for Dallas as they received strong offensive performances from Tony Romo and DeMarco Murray in a 41-28 win, dismantling the remnants of Chicago’s defense.

In the process, Dallas’ win moved them to 9-4, and ahead of Seattle and Detroit (8-4) by a half-game for an NFC playoff spot.

Cutler finished 32-for-46 for 341 yards, 2 TDs and an interception, but the Bears offense just didn’t click until well after the game was already in hand. In the 2nd quarter, star receiver Brandon Marshall left the game, and was eventually taken to the hospital for further evaluation on his back.

Forte’s 6th rushing TD this season capped off a 12-play, 67-yard drive. After the two-point conversion, the Bears trailed 38-21 with 7:17 remaining in the 4th quarter.

Chicago subsequently recovered an onside kick and drove 50 yards on three plays. Cutler kept it himself and ran 10 yards for a TD to cut the Cowboys lead to 38-28 with 6:09 remaining in the 4th quarter — just 1:08 after Forte’s score that made it 38-21.

Bears Finally Got Going Again in the 4th

It took just over 2:00 for the Bears to go 76 yards on five plays. Alshon Jeffery hauled in his 8th TD catch of the season.

The extra point was blocked, so the Bears now trail 35-13 early in the 4th quarter.

The Cowboys Scored 3 TDs in the 3rd Quarter

Joseph Randle found the end-zone for just the 2nd time this season, but everybody was involved in the Cowboys offense tonight, so it wasn’t a total surprise.

The Cowboys offense once again made it look easy going 68 yards on just six plays. Murray went over 100 yards rushing on the drive — matching Heavy’s prediction from earlier today.

Romo Threw his 3rd TD Pass of the Game

Romo’s 3rd TD of the game went to Gavin Escobar — his 3rd of the season.

The highlight of the drive was a Bryant 43-yard reception in traffic to set the Cowboys up in the red zone once again.

Dallas took a commanding 28-7 lead with 8:02 remaining in the 3rd quarter.

Just Forte’s 2nd fumble of the season, but a costly one.

The Cowboys answered almost immediately with Beasley’s 2nd TD grab of the game, a 24-yarder this time, giving the Cowboys a 21-7 lead early in the 3rd quarter.

On their last possession of the half, Tony Romo orchestrated the Cowboys offense on a 14-play, 72-yard drive that took up 6:05 of game clock, and concluded when Romo hit Cole Beasley for a 12-yard TD. The drive included four 3rd Down conversions, including a 3-and-15 conversion to Jason Witten to cross midfield. Dallas has converted 5/9 3rd Down attempts in the first half.

In our featured match-up, Kyle Fuller has “slowed” Dez Bryant but didn’t stop him completely.

The Bears received the 2nd half kickoff.

Bears Answered With 7 Thanks to Brandon Marshall

Just a typical day at the office for Mr. Marshall.

Marshall caught another pass on the drive and subsequently left the game and, later, the hospital, after getting a knee to the back from a Cowboys’ defender.

Two plays later, Martellus Bennett was the beneficiary of a Cutler 12-yard TD pass, capping an 8-play, 80-yard drive, tying the game at 7-7.

The Cowboys pounded the rock early and often. Murray already rushed for 56 yards on 14 carries — including a 1-yard TD run — and caught three passes for 21 yards, combining and accounting for 77 of Dallas’ 108 total yards in this game already.

Both Teams Failed to Score in the 1st Quarter

In a fast-moving 1st quarter, neither the Cowboys nor the Bears got on the scoreboard. On the first drive of the game, the Cowboys drove into Chicago territory at their 36-yard line, but head coach Jason Garrett elected to take the field position and punt the ball away pinning the Bears deep on their opening drive.

Playing the field position game worked for the Cowboys, and they started the 2nd quarter from the Bears 22-yard line, their 3rd drive of the game looking to break the 0-0 tie.

Both Dallas and Chicago lost Thanksgiving games by double digits. The Bears lost to the Lions 34-17 and the Cowboys lost to the Eagles 33-10.

The Cowboys December problems are very real. Since the last time the Cowboys made the playoffs — when they went 11-5 and won an NFC East division championship in 2009 — the Cowboys have finished a wildly mediocre 7-10 in the month of December, and have finished each of the last three seasons with exactly an 8-8 record. If we extended “end of the season” games to include January games as well, well… their record wouldn’t improve much because they’re 1-1 in January games, bringing their overall record in late-season games to 8-11.

In each of their 2011, 2012 and 2013 season finales, the Cowboys dropped divisional games to the Giants (who went on to win Super Bowl XLVI), the Redskins and the Eagles respectively with Tony Romo playing sub-par in each game. The Cowboys have a chance to take control of their own destiny, but with road games against Chicago, Washington and Philadelphia — their lone remaining home game is against Indianapolis, which doesn’t have nearly as much playoff implications as the other three NFC match-ups would — if the Cowboys can win those three games, with a head-to-head victory against Seattle on its resume, the Cowboys would most likely be in the playoffs.

The Bears would need a lot of funky stuff to happen in order for them to think about an NFC Wild Card. The Lions, Seahawks, 49ers and Cowboys would all essentially have to lose out. Instead, with a depleted roster, it’s time to see just how much effort head coach Jim Trestman and his staff during the season’s final four weeks. Trestman was hired before 2013 because of his brilliant offensive mind and his ability to continue to mold and mature quarterbacks. Despite being a QB guru, the eye test says that Jay Cutler under Trestman has looked like the same Cutler everybody has always watched.

Cutler has 24 touchdowns this season throwing to Brandon Marshall and Alshon Jeffrey, but he also has 14 interceptions and multiple fumbles. He is also the scapegoat for the idea to fire Trestman, which comes as no surprise because Cutler has a history of not meshing with any of his head coaches.

The Bears should come out motivated to play on Thursday night, but there lack of talent will make it hard for them to stay within striking distance of the Cowboys offense. 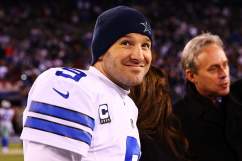 Read More
Breaking News, Football, NFL
Tony Romo and the 8-4 Cowboys, who are still fighting for a playoff spot, take on Jay Cutler and the 5-7 Chicago Bears at Soldier Field.