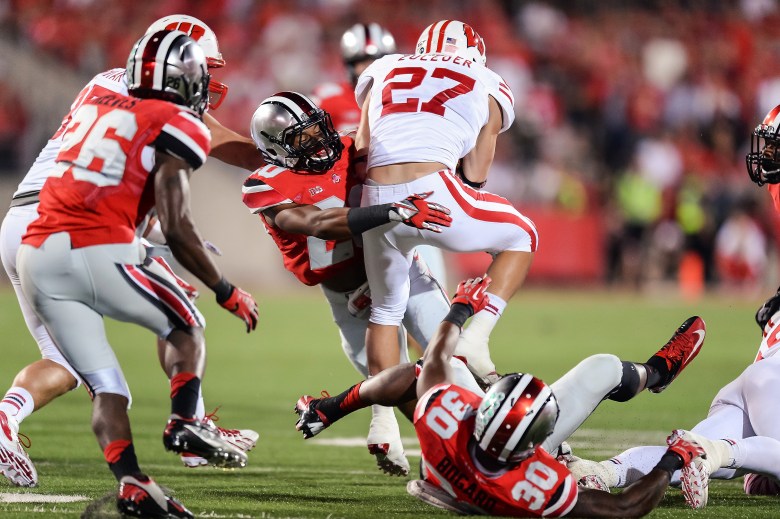 Cardale Jones walked away from his first college start as a Big Ten Champion and MVP of the Championship game with 257 yards, 3 touchdowns and no interceptions, leading Ohio State to a 59-0 rout of Wisconsin that could land the Buckeyes in the College Football Playoff field.

Ezekiel Elliot finished with 220 yards and 2 touchdowns on 20 carries. Devin Smith had 137 yards on four receptions, three of which were touchdowns.

The Buckeyes defense held Gordon to 76 yards on 26 carries with a fumble. Stave had 187 yards and 3 interceptions. It is the first time Wisconsin has been shutout since 1997.

Ohio State will have to wait until tomorrow morning to see if this win was enough to get them into the playoffs.

Samuel’s second touchdown of the night came on a 1-yard run.

His first was from 12 yards out.

Stave Intercepted for the Third Time

Grant had his second interception of the night late in the fourth quarter.

Wisconsin’s defense certainly won’t save the game with that play, but they did show that the players at least are still awake.

First by defensive back Vonn Bell, and then twice by cornerback Doran Grant.

Elliot ran for an 81-yard touchdown, putting the Buckeyes up 14-0 in the first quarter.

Ezekiel Elliott hits the hole and it's off the races for the 81-YD @OhioStAthletics TD. #DQFanFavorite http://t.co/xtIyUrDPDb

Elliot also has a multiple-touchdown night so far, scoring his second touchdown of the night, a 14-yard run.

Jones has Picked his Favorite

Smith has his third touchdown reception on the night. This one was for 42 yards.

The first can on the opening drive — the first of Jones’s first start — and was for 39 yards:

Cardale Jones gets @OhioStAthletics rolling with a 39-YD TD strike to Devin Smith. Brought to you by @Buick. http://t.co/SN9KO7eu61

And the second was for 44 yards:

Defensively, they look just as good. The first half shutout has been backed by an interception that led to a field goal and a recovered fumble on which Bosa scored a touchdown.

Heisman-hopeful Gordon has only 43 yards and lost the fumble that Bosa recovered. Stave has passed for 58 yards and was intercepted by Bell.

The Buckeyes are definitely putting on a show for the Selection Committee as they hope to slip into a playoff spot.

Buckeyes Defense Scores Their First Touchdown of the Game

The @OhioStAthletics D forces the fumble & Joey Bosa turns it into a scoop-and-score. Brought to you by @Buick. http://t.co/x4jj47vPLb

The fifth-ranked Ohio State Buckeyes (11-1) will play the eleventh-ranked Wisconsin Badgers (10-2) on Saturday in the Big Ten Championship game.

Smith will be out for the rest of this game, but will be eligible to play in Ohio’s next.

Ohio State will be relying on its third-string quarterback, Cardale Jones, after backup-turned-starter J.T. Barrett fractured his ankle on Saturday and had it surgically repaired on Sunday. Barrett is expected to be ready, but limited, for spring practice. Saturday will be Jones’ first start of the season.The Buckeyes are also playing in the wake of lineman Kosta Karageorge’s death.

Wisconsin running back Melvin Gordon is right in the thick of Heisman talk. The junior has 2,260 yards and 26 touchdowns this season with an average of 8 yards per carry.

Keep it here for score updates and highlights throughout the game. 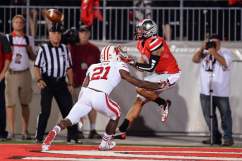