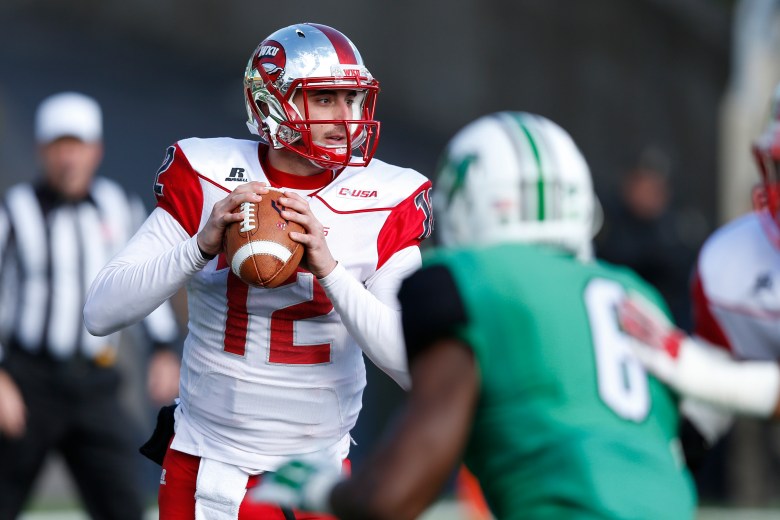 First of all, there’s a bowl game in the Bahamas? Not too shabby. Anyway, Western Kentucky piles up the points. At 44 per game, the Hilltoppers rank 6th in the FBS. Central Michigan ranks in the lower half of the nation at 25 ppg. But let’s not count the Chippewas out yet – WKU gives up 39 per contest.

Hilltoppers QB Brandon Doughty leads the nation in passing with 4,344 yards and 44 touchdowns. He threw 8 in his last game, a 67-66 overtime win over then-No. 24 Marshall. Read that sentence again. Doughty does a great job of spreading the ball around as no receiver has more than 739 yards. Leon Allen has been able to take advantage of defenses playing the pass to the tune of 1,490 yards and 12 touchdowns.

Central Michigan does not stand out in any one area. Cooper Rush has thrown for 20 touchdowns and Thomas Rawls has added 10 more on the ground to go with just over 1,100 yards. Defensively, CMU ranks in the top 20 in rushing defense at just under 120 yards per game.

The Chippewas might be able to slow down Allen, but it will be next to impossible to stop Doughty and the passing game. CMU doesn’t give up a ton of points (23.2 per game), but neither did Marshall and WKU dropped 67 on the Herd. If you look closer, the Hilltoppers 7-5 season was a few plays away from being an 11-1 season. Doughty ends an unbelievable year on a high note.