Polee collapsed while Riverside was in the middle of an offensive set. You can watch video of the play above.

Polee was down on the court for more than 10 minutes. He waved to the crowd as he was being carted off the court and was conscious when leaving the arena, the school announced.

We’ll have updates on this post as more information becomes available. 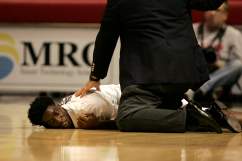