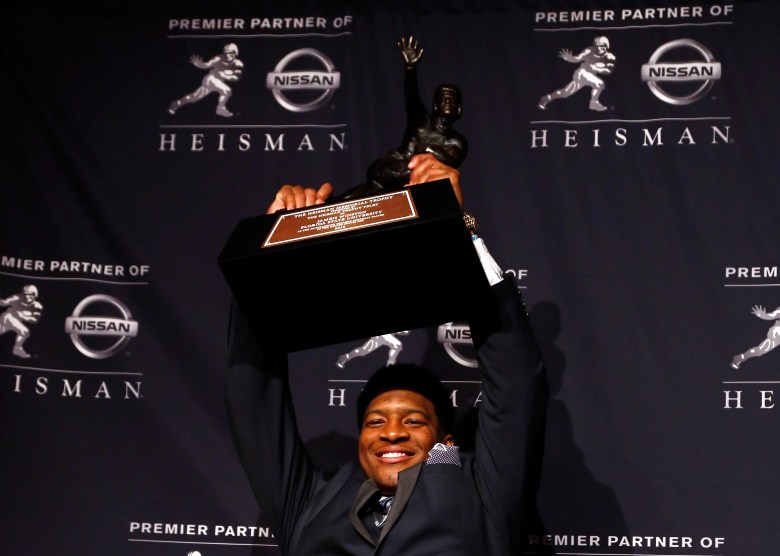 Jameis Winston holds up the Heisman Trophy after winning it in 2013. (Getty)

Saturday night in New York City, either Marcus Mariota, Melvin Gordon or Amari Cooper will hold up the Heisman Trophy, just as Jameis Winston did last year and just as the nation’s best player has done every year since 1935.

The task of lifting the trophy is a bit easier than winning it. But holding it high above your head the way Winston did last year requires a good amount of arm strength given the size of the trophy.

Made of cast bronze, the trophy weighs in at 45 pounds and stands 13.5 inches tall.

The design of the trophy — a player wearing a leather helmet and throwing a stiff arm — was used to distinguish it from others and show the toughness of the players that have and will receive it, according to the trophy’s website.

“Before the now-famous stiff-arm design, the Club Trophy Committee concurred that the traditional cup or bowl seemed too commonplace, lacking in distinction, and in no way emblematic of the athletic talent that was to be honored and immortalized. It was decided that the trophy would be the bronze embodiment of a muscular footballer driving for yardage.”

The trophy was designed by sculptor Frank Eliscu, who used New York University’s Ed Smith as his model. This prototype was then sent to Jim Crowley, who was the head coach of the Fordham University football team at the time.

“Eliscu prepared a rough clay study that was sanctioned by the DAC Committee, and sent uptown for approval by the head football coach at Fordham University, Jim Crowley, one of the legendary Four Horsemen of Notre Dame. The prototype was set up on a field, and Crowley’s players were asked to assume various positions to illustrate and verify the side step, the forward drive, and a strong-right arm thrust. The artist closely observed these action sequences and modified his clay prototype. The result was a truly lifelike simulation of a player in action. It was then duplicated in plaster—a preliminary step towards its ultimate production in bronze.” 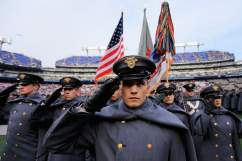