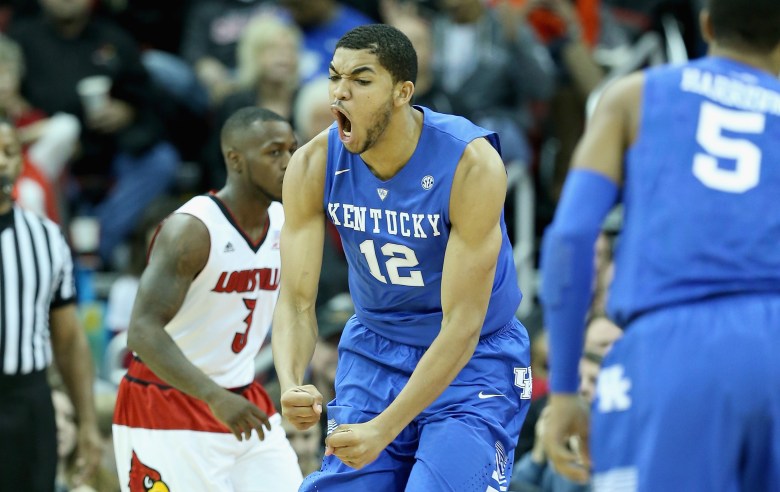 Karl-Anthony Towns celebrates during the first half of Kentucky’s game at Louisville. (Getty)

Top-ranked Kentucky (13-0) overcame a sluggish first half and used suffocating defense to beat No. 4 Louisville (11-1) on Saturday at the KFC Yum! Center.

The Cardinals pulled within 35-32 with 8:48 remaining in the game, but the Wildcats used a 15-6 run to pull away and remain unbeaten.

Louisville’s Chris Jones hit the court in pain from what appeared to be a Dakari Johnson elbow to the face.

Johnson was actually called for an offensive foul on the play.

Kentucky Shot Much Better in The 2nd Half

Both teams struggled mightily to put the ball in the basket in the first half as evidenced by the 22-18 score.

Kentucky finished with 18 turnovers compared to just 9 for Louisville.

Rozier and Montrezl Harrell had 8 rebounds each.

Amazingly, Louisville had just 1 assist the entire game. It was recorded by Chris Jones with 11:11 left in the first half.

Tyler Ulis Took an Elbow to The Head And Had to Leave The Game, But Then Returned

With 4:41 remaining in the first half, Kentucky’s Tyler Ulis caught an unintentional elbow which caused a bloody gash above his eye.

He had to be taken back to the locker room, but he returned to the bench with just under 4 minutes left in the half.

Ulis re-entered the game with 2:50 remaining with two bandages above his right eye.

Both Offenses Were Struggling

By the time the 3rd official timeout came with 7:44 remaining in the first half, both teams seemingly couldn’t buy a basket.

Montrezl Harrell made his presence felt on the defensive end for Louisville (see above clip), which had 4 turnovers in the 4-plus minutes.

Preview: No. 1 Kentucky And No. 4 Louisville Get Set For Bluegrass State Showdown

It’s a taste of the Final Four in December.

At least the KFC Yum! Center in Louisville is going to have that vibe.

When 12-0 and top-ranked Kentucky travels the 1 hour and 20 minutes to Louisville to meet the unbeaten, 4th-ranked Cardinals (11-0), Bluegrass State bragging rights are on the line. 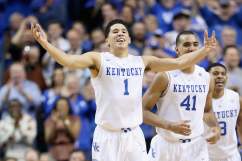 How to Watch Kentucky vs. Louisville Live Stream Online

Read More
Basketball, College Basketball, Kentucky Basketball, Louisville
Top-ranked Kentucky pulled away in the 2nd half for a win over No. 4 Louisville, claiming Bluegrass State bragging rights. Read on for the recap, stats and highlights.