The NFL has decided not to fine nor discipline any of the five St. Louis Rams players who took part in Sunday’s demonstration.

During player introductions before Sunday’s game against the Oakland Raiders, several Rams players used a hands-up demonstration during their entrance that protested the controversial Nov. 24 Michael Brown decision to not indict Officer Darren Wilson in the shooting of the teenager.

In the video, wide receivers Tavon Austin and Kenny Britt exit the tunnel first, coming out with both arms in the air as a sign of protesting the controversial Ferguson decision. The rest of the Rams receivers followed suit and joined Austin and Britt as they entered the field.

Britt defended the players’ decision by releasing a statement after the game:

In response to the SLPOA’s statement, the NFL responded by saying that they will not adhere to the request of the SLPOA.

“We respect and understand the concerns of all individuals who have expressed views on this tragic situation.”

This wasn’t the first time this season that NFL players, in an act of solidarity, showed their support to the Ferguson, Mo. community. During an Aug. 19 preseason game against the Cleveland Browns, 11 Washington Redskins players protested, officially bringing the hands-up gesture onto the field – which didn’t receive a disciplinary answer from the NFL nor a statement directly from the SLPOA.

The precedent for the league responding to these select demonstrations involving the case was set back in August, and through the last four months, the NFL’s decision-making on this issue has remained uniform. 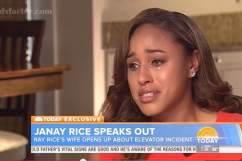